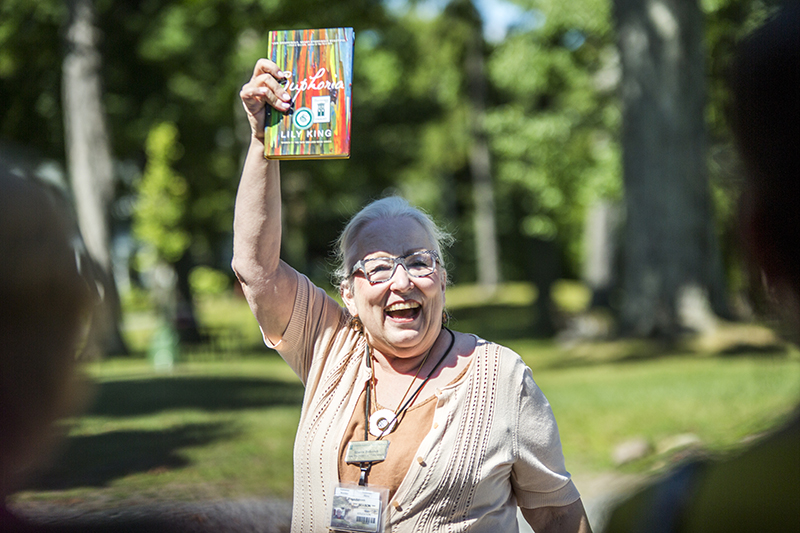 Nathaniel Hawthorne lived briefly at the utopian Brook Farm in 1841. After growing tired of political unrest and shoveling manure, he returned home and married his fiancée, Sophia Peabody. He dramatized his stay at Brook Farm in his novel The Blithedale Romance, which features betrayals, women’s rights activists, prison reform schemes and, of course, death.

“No summer ever came back, and no two summers ever were alike,” Hawthorne wrote in The Blithedale Romance. “Times change, and people change; and if our hearts do not change as readily, so much the worse for us.”

Chautauqua Institution has a radically different mission from the fictional Blithedale and the real Brook Farm, but the sentiment Hawthorne expressed in his novel is one that rings true at Chautauqua. It’s a place that is supposed to change people, and one of the ways it does so is through the Chautauqua Literary and Scientific Circle.

Sherra Babcock, vice president and Emily and Richard Smucker Chair for Education, said that is the mission of the CLSC: an expansion of the mind and the heart through an interaction with literature. Babcock said part of constructing the list of CLSC selections for each year involves looking at a wide variety of genres to help encourage readers to try something new.

“We’re never going to have a season that is all alike in terms of genre, because it doesn’t give people choices, and it doesn’t remind people of the wide variety,” Babcock said.

Being deliberate with CLSC programming helps enrich readers by allowing them the opportunity to experience many different kinds of stories and narratives, Babcock said. The CLSC seal of approval can also help people be more confident in trying a genre outside of their comfort zones.

This year’s CLSC list includes five works of nonfiction, a poetry collection, three novels and a translation of one of the most classic works in the world: Homer’s Iliad. Babcock said when seeking out and selecting books for the CLSC, she and her department try to think in terms of timelessness.

“We do think about the fact that people are going to be reading these books 100 years from now,” Babcock said.

But reading tastes change over time, and writing styles do, too, and Babcock said some of the books on the historic CLSC list are works that many readers would struggle with or be uninterested in today. Besides featuring works that will hopefully stand the test of time, she said each CLSC list should serve as a historical record of what was on readers’ minds in a particular year.

“It’s also important that the book be timely, even though it might ‘expire’ in terms of relevance to tomorrow,” Babcock said. “It might be an issue that we’re talking about today that’s going to be settled sometime. But it’s important that it be a reflection of the times.”

The CLSC operates under a vertical theme — a framework that helps readers both on  and off the grounds explore the deeper elements of the books for the year. This year, the CLSC’s theme matches the theme for all of Chautauqua Institution’s 2016 programming: “What Does It Mean To Be Human?”

The CLSC normally has its own theme, but Babcock said the season’s theme felt like a perfect fit for the CLSC books, because it’s a question often asked in literature — and one that she said is answered by each of the books chosen for this year.

Five of this year’s authors are returning to the CLSC Roundtable platform: Diane Ackerman, Geraldine Brooks, Billy Collins, Stanley Lombardo and David McCullough. Babcock said their willingness to return to Chautauqua speaks to the influence and experience of the place, as well as Chautauquans’ affinity for those authors.

Week One will feature Brooks, who is returning to Chautauqua for the fourth time with the CLSC to present The Secret Chord, a fictionalization of the life of King David. Babcock said the narrative of Brooks’ work fits perfectly with Chautauqua’s focus on the four pillars
of arts, education, religion and recreation.

Larissa MacFarquhar will visit in Week Two to present Strangers Drowning: Grappling with Impossible Idealism, Drastic Choices, and the Overpowering Urge to Help. Babcock said the book was not what she expected, and she’s excited for Chautauquans to hear MacFarquhar speak to the philosophy behind extreme do-gooders.

Weeks Three and Four will present two works focusing on history: Dan Ephron’s Killing a King: The Assassination of Yitzhak Rabin and the Remaking of Israel and McCullough’s The Wright Brothers, respectively. Babcock said the books almost read like novels, despite being meticulously researched historical works.

Lucy Kalanithi will present her late husband Paul Kalanithi’s best-selling work When Breath Becomes Air in Week Seven. Babcock said she saw an interview with Lucy, was gripped by her and Paul’s story, and immediately reached out to her.

Week Eight will feature two selections, one of which is a do-over of sorts. Ackerman will give a special presentation of The Zookeeper’s Wife: A War Story, which she was unable to present in 2008. Lombardo, who last presented his translation of Virgil’s Aeneid in 2007, will discuss and read from his translation of Homer’s Iliad. Babcock said listening to Lombardo read his translations is “an amazing experience.”

The season’s final presenter is Week Nine’s Collins, who will present Aimless Love: New and Selected Poems. Babcock said Collins is a Chautauqua favorite and that picking a poetry collection for a week on music and jazz felt natural, because poetry and jazz go “hand in glove.”

Although the 10 works selected for the CLSC have their differences, Babcock said one uniting element is they all feature rich and intriguing characters, which she sees as an answer to the season’s vertical theme.

Babcock said it can often be a challenge to create a vertical theme that fits the context of the season, but with an Institution-wide question of “What Does It Mean To Be Human?” she believes it was the right choice to match themes this year. She said most good books answer the question of what it means to be human, because humans are reading them and asking their own questions.

As Hawthorne wrote, no two summers are alike, and no year at Chautauqua is the same. Times change, and so do people, and Babcock believes the CLSC programming captures that spirit.

“We think it broadens your perspective — to enjoy different kinds of literature,” she said.