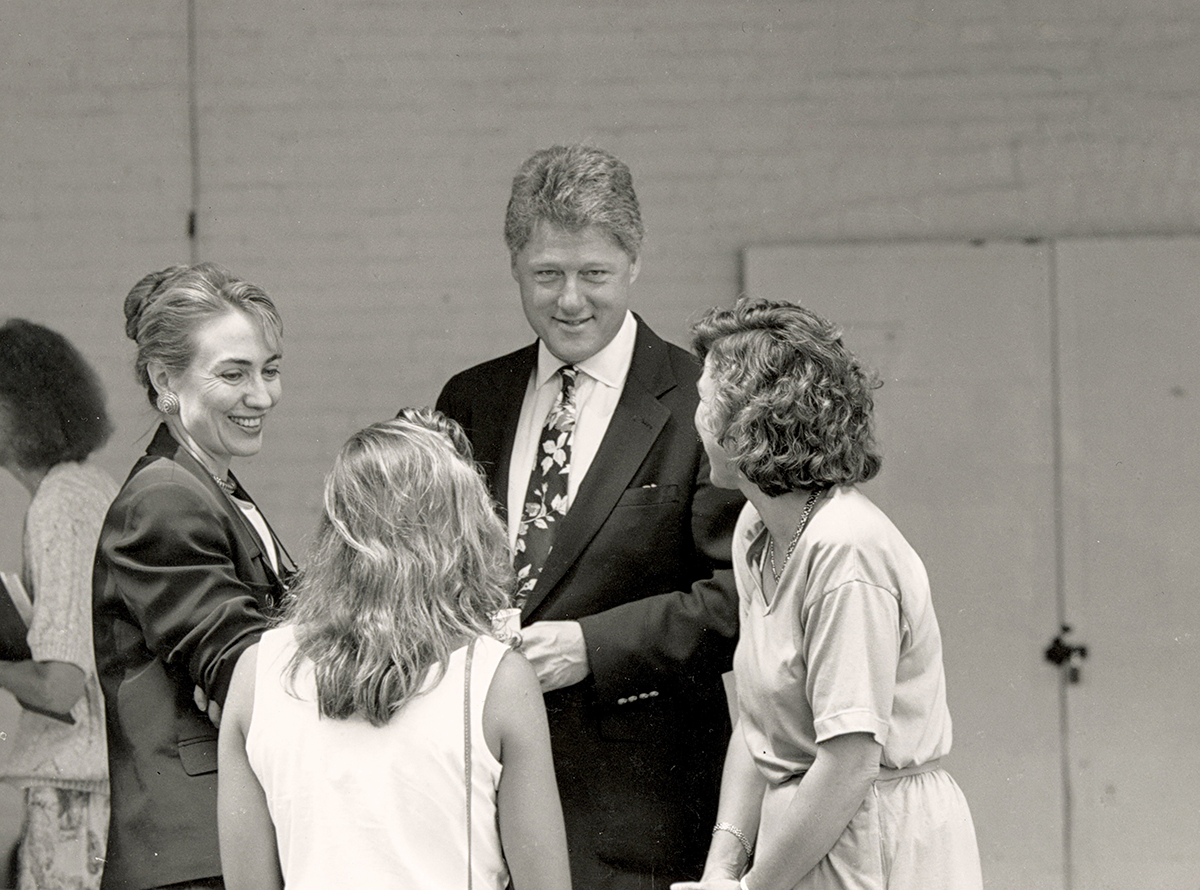 Long before she was the presumptive Democratic nominee for president, and before she became perhaps the most vilified American woman since Jane Fonda, Hillary Clinton appeared at Chautauqua Institution as a wife, a mother and a champion of children’s rights.

It was 25 years ago, June 28, 1991, and Hillary Clinton was making a joint appearance at the Amphitheater with her husband Bill, who was then the Democratic governor of Arkansas and who would declare his candidacy for president the following month. The theme that week was “The Human Family,” and the Clintons were closing a week of lectures and events devoted to that subject. They spoke about the family in general and about their own family (daughter Chelsea was 11 and a student in the Little Rock public schools), and in their separate remarks, they both came across as remarkably human.

“I think all us of come to the idea of family with some built-in presumptions because we all were members of one, and so it’s probably a bit presumptuous and perhaps a bit foolish to stand in front of a group such as this to talk about these matters,” she said to the Amp crowd. “But we were invited to do so, and it was a wonderful reason to come to Chautauqua, so here I am.”

Clinton said she first came to think of the concept of family in terms of her faith, a faith that has been called into question recently by Donald J. Trump, the presumptive Republican nominee for president.

“I was raised, and am, a Methodist,” she said. “And I can remember in my junior high years having the experience of being taught by a youth minister who was wise beyond his years.”

She went on to describe how that minister took her and a group of other suburban children to the central city of Chicago, where they met and talked with children from dramatically different backgrounds.

“I can remember thinking that, from that time forward,” she said, “that one of the great mysteries that I was concerned about is: How did we raise children with different backgrounds and cultures and economic standards to have the kind of competence and character that we need to have to keep our country going and to make society really available in all of its quality to as many of our people as possible?”

Clinton said she was inspired by Marian Wright Edelman, the noted children’s advocate who, coincidentally, had spoken from the Amphitheater platform the day before. At the time, Clinton, 43, was in private legal practice in Arkansas and was also chairman of the board of the Children’s Defense Fund, an organization for which she had long worked.

Segueing into the more personal, she told the audience that, as a feminist coming of age in the late ’60s and early ’70s, she had mixed feelings about marriage.

Then she met Bill Clinton at Yale Law School.

“The first words I heard out of his mouth occurred as I was walking through the Yale Law School Lounge one day with a friend of mine to get a Coke after class,” she said. “I heard this voice say, ‘And not only that, we grow the biggest watermelons in the world.’

“I said, ‘Who is that?’ and she replied, ‘That’s Bill Clinton. He comes from Arkansas and that’s all he ever talks about.’ ”

For his part, Bill Clinton, who followed his wife at the Amp that morning with his own wonkish dissertation on the state of the American family, recalled his first meeting with his future wife.

He told the crowd that he was talking with a friend in the Yale Law School Library and could not keep his eyes off a young woman at the far end of the room. He said that she saw him looking at her and came over.

“ ‘Listen, if you’re going to keep staring at me, and I’m going to keep looking back, we at least ought to know each other’s name,’  ” Bill Clinton recalled. “ ‘I’m Hillary Rodham. What’s your name?’ ”

“Well,” he said, “I couldn’t remember my name. I just wanted to crawl under a bench.”

In her talk, Hillary Clinton candidly discussed how their relationship blossomed and grew and how she found herself putting that relationship before her immediate career goals, despite herself. She moved to Arkansas.

“My family and friends thought I had lost my mind,” she said.

They were married, and in 1980, welcomed Chelsea into the family. Today, they are grandparents.

It has not always been an easy marriage, but it has stood up through good times and bad, including the humiliating exposure of Bill Clinton’s extramarital affairs, which put the most personal and painful aspects of their lives on relentless display for the world.

“My experience is maybe a little bit atypical because so much of our married life and our parenting has been played out in the public eye,” Hillary Clinton told Chautauquans a quarter century ago.

The Chautauquan Daily also mentioned at the time how she could not avoid the spotlight, noting that she faced “special problems” publicly playing the roles of “working woman, wife and mother.”

“Life is a lot easier if you marry someone smarter than you with more character,” he said.