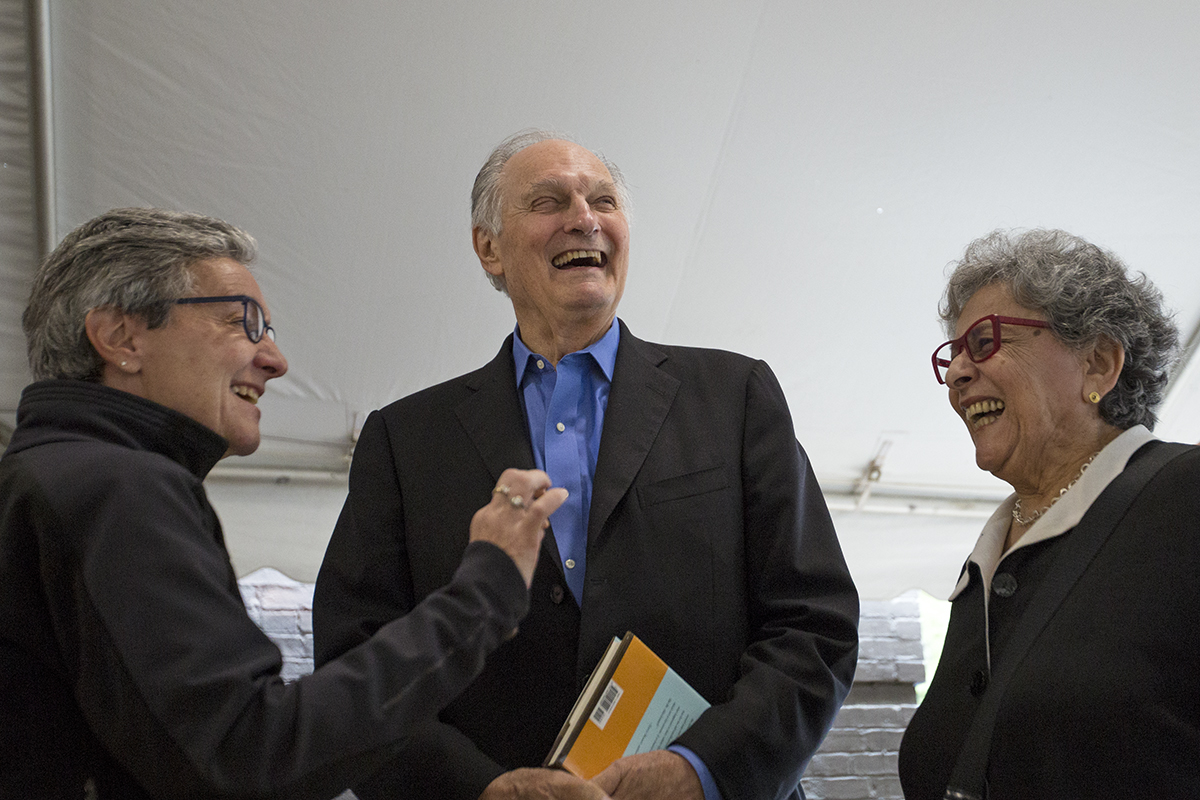 Alan and Arlene Alda work creatively on many different platforms. Alan Alda spent his career as an actor, director and writer. Arlene Alda is a clarinetist, photographer and writer. The couple, who have been married nearly 60 years, strongly believe in imagination, originality and seeking ideas out of everyday life.

The Aldas joined author Roger Rosenblatt during the July 1 morning lecture in the Amphitheater, bringing the weeklong conversation on creative expression to a close.

Before the lecture began, Rosenblatt thanked the audience and Chautauqua Institution President Tom Becker for the five weeks, over the course of eight years, that he has hosted “Roger Rosenblatt and Friends.” With that, he announced this week has been his last.

Arlene Alda began the conversation by discussing how the idea her book Just Kids From the Bronx came to her.

Alda returned to the apartment building where she spent her childhood many years later with J. Crew’s CEO Millard “Mickey” Drexler, who had grown up in the same building. Alda grew up in a small one-bedroom apartment that housed her family of five.

Alda said Drexler always dreamed of moving away from the Bronx, but, when he arrived to the six-story apartment building, he began to animatedly tell stories about his childhood.

“There was something there that really excited me, because his childhood and his exhilaration while talking about it was really different than mine, and I lived in the same building,” Alda said.

After the visit, Alda began to interview individuals of all ages who grew up in the Bronx. The book includes stories from people whose ages spread across six decades.

“The list began to grow of these wonderful people who grew up in the Bronx and were delighted to talk about what it was like for them growing up,” Alda said. “The Bronx gets a bad rep, you know, and I was going to set the record straight.”

When approaching the story, Alda did not carry a notebook full of questions she wanted to ask. All she wanted was a conversation that would let the person speak freely of their childhood.

“I was afraid that if I asked specific questions I would be locking out what might bubble to the surface,” Alda said.

Alda recorded every conversation she had and later transcribed them. She sifted through all the interviews to find the best stories, which she combined into her book Just Kids From the Bronx.

“What I tried to do was chronologically pick out from each person’s conversation that story, which was not only personal to them, but which we could all identify with, be amused by, be saddened by or be informed by,” she said.

Alan Alda also shared how he came up with the idea for his book, Never Have Your Dog Stuffed and Other Things I’ve Learned, which came out of a story from his childhood.

At 8 years old, Alda’s best friend was his beloved dog, a black cocker spaniel. Alda said his family often fed the dog table scraps, and unfortunately the dog died after choking on a bone in some leftover Chinese food.

“So he looks down at me, and he says maybe we should have him stuffed,” Alda said, which resulted in a roar of laughter echoing through the Amphitheater.

The story continued when Alda and his father went to a taxidermist on Hollywood Boulevard to drop off the dog. It took six weeks for the dog to be stuffed, and the black cocker spaniel returned to him wrapped in butcher’s paper.

“And there sitting on this blue velvet board is my dog with this horrifying expression,” Alda said. The family kept the dog next to the fireplace in the living room. “In the corner of the room you could see this animal with this wild look in his glass eyes.”

Alda said what ended up being a funny story — though upsetting at the time, taught him a valuable life lesson, which he carries into the book.

The couple also spoke about how imagination affects their artistic pursuits. Arlene Alda said writing was never something she imagined doing and is a continuous challenge.

“As a kid, music was my thing and I never thought of anything but becoming a professional musician,” Alda said. “Writing itself required a tremendous leap of both imagination and courage for me. Initially, I didn’t know what I was doing. It was trial and error. I didn’t know how one started, and I certainly didn’t know how one ended, a story.”

Her exploration into writing grew from writing small blurbs to accompany the photographs she took. As she wrote full-length novels and children’s books, her curiosity and love for writing flourished.

“Photographs are no longer my starting point,” Alda said. “I often will get a sense of something, and I don’t know what it is from a word, from an event, from being with someone, from a piece of music, it just sparks me. I can’t even say why.”

Alan Alda said creativity and imagination played a role in both his acting and writing. Though it can be difficult for Alda to put himself into a situation to play a character completely different than his own personality, Alda said once he immerses himself into the work, he essentially becomes that character.

He used an example of when he played Captain Hawkeye Pierce in the TV series “M*A*S*H.” Though he was dressed for the part, Alda didn’t feel like Hawkeye as he wanted to enter the set during the first rehearsal.

His character drank, smoked and was “more of a skirt chaser” than Alda himself was.

However, as he walked on stage and pulled a passing nurse into a hug, he said he became Hawkeye.

When it comes to creating new works and writing, both artists believe originality exists and will continue to exist.

Alan Alda made the comparison that to another species, all humans would look alike. However, each person has a different personality and something that makes that person original.

“So originality in some ways, I think, depends on what the frame of reference is,” Alda said. “The themes remain the same. It’s how we interpret them.”