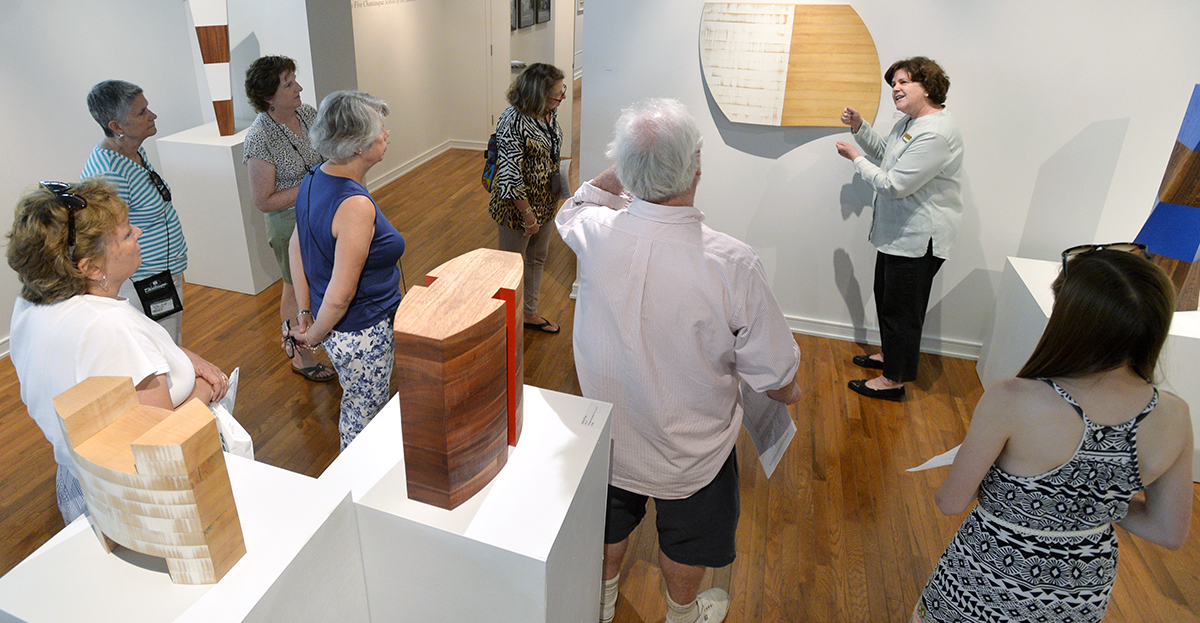 Some artists might balk at their work being called simple, but Kevin O’Toole welcomes that definition.

“I think it’s [my] nature,” O’Toole said. “There have been times when I’ve wanted to make things a little more complicated, but my natural tendency is just to simplify forms … Sometimes I wonder whether they’re enough, but they’re enough for me.”

About 15 of O’Toole’s wooden pieces are currently on display in the solo exhibition “The Shape of Things to Come” at the Bellowe Family Gallery in Strohl Art Center, which will run until July 24.

Judy Barie, the Susan and Jack Turben Director of VACI Galleries, said even though O’Toole’s work is simple, it has unusual and interesting details like silver leaf or paint on the surface of his woodwork that stands out from other artists’ work. She also said although most exhibitions have works by different artists, such as the 59th Chautauqua Annual Exhibition of Contemporary Art, she wanted to use the small gallery space to feature art by just one person.

“The whole show becomes a work of art the way I stage it, compared to five different people with three different pieces each,” Barie said. “So when you do a one-person show, the beauty of that is that you really can play with the shapes and all the works complement and work well with each other and they really flow better.”

O’Toole said the process of creating his pieces starts with taking two-dimensional elements such as graph paper or lamination and stacking them in different ways. Although he usually has a predetermined vision for the finished product, he said, sometimes he plays around with different shapes until he is satisfied with the proportion.

A lot of O’Toole’s work comes from going back to older pieces and making variations of the shame shape using different proportions or materials, he said. One piece in the exhibition, for example, which uses gesso and is concave on one side while convex on the other, is a form O’Toole said he has worked with about a dozen times in the past.

One reason O’Toole enjoys woodworking is the challenge of making geometric and precise shapes, even though he said wood is an organic material that isn’t necessarily meant to be geometric. In the past, O’Toole said, he worked with clay and other organic materials, and over time, the shapes progressed from being soft to almost “egg-like” in appearance.

Over the course of about 30 years, O’Toole said his work gravitated to more geometric and simple shapes. He knows it will resonate with some people, and others will think it is too simplistic. But even though he has done work for exhibitions and corporate commissions, O’Toole said he doesn’t create work with other people in mind.

“Essentially, I make them for myself. I think that either you’re a maker or you’re not a maker. If you’re maker, you need to make things,” O’Toole said. “I’m always making things and sometimes if you make things for a year and you don’t have a show, they just pile up in your studio, but you don’t really stop making just because you don’t have a venue.”

Young Dancers to Showcase Variety of Styles in Studio Show