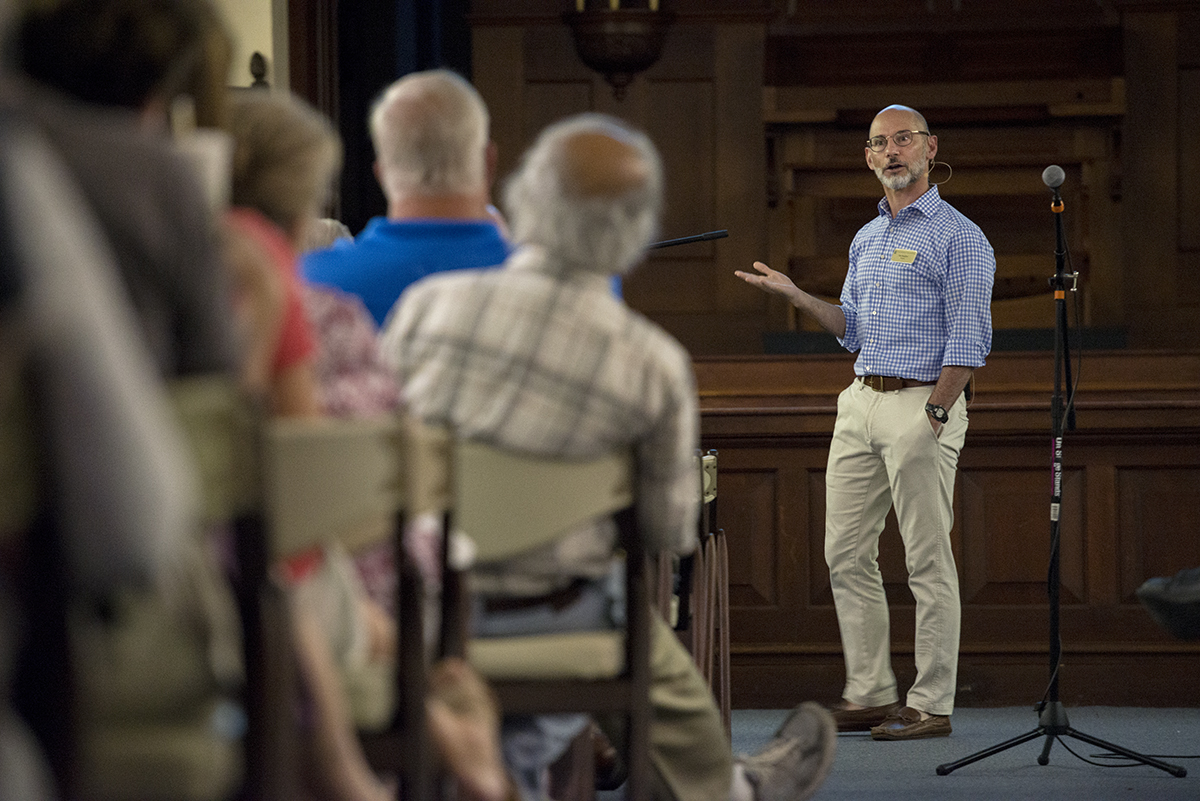 Board of trustees member Tim Renjilian gave Chautauquans a look at how the sausage gets made when it comes to programming at Chautauqua Institution.

Renjilian facilitated the conversation of the “Re-Imagination of Programming” Wednesday in the Hall of Christ during the second Trustee Conversation.

Renjilian is the vice-chair of the board’s Program Policy Committee. During his talk, he broke down programming into three key areas that a subgroup, composed of trustees and staff, have been examining: the lecture platform, classical entertainment and popular entertainment.

In that examination, the board has used data from surveys and attendance numbers to better understand what is working well and what needs  to be improved, not only to create a better overall experience, but to keep the Institution financially stable.

“From a programming standpoint, … we know the best way to secure financial sustainability for Chautauqua is to have more people come here,” Renjilian said. “That way prices can stay lower, and we don’t have to hammer people on philanthropy all the time. It’s basically the perfect solution.”

Renjilian said there are four stages in the evolution of a Chautauquan: attract (getting them to the grounds), retain (bringing them back), advocate (bringing friends) and give (time and philanthropy).

As far as attendance goes, single-ticket sales can fluctuate but overall are down. Season gate pass sales are down 19 percent since 2000, while long-term gate passes, which can span an overnight to eight weeks, are up 13.6 percent in that same time frame. The relationship between weeks and attendance can vary, Renjilian said, as each week has the possibly to go well or to go poorly.

Looking to the future, he said there are a few factors the Institution is looking to change and keep in mind within the planning process. For the lecture series, he said, there should be an emphasis on the theme itself, the title and marketing the theme clearly to the audience.

“There’s an art to developing an effective program that’s going to draw people and make them want to come back,” Renjilian said.

Overall, each category could be improved along with attendance if more Chautauqua-specific relationships are made with artists, speakers and other types of performers, he said, like its relationship with documentary filmmaker Ken Burns.

“We don’t want to just put out a program that consists of big-name speakers you can get from a speakers bureau; so can everyone else and you can go see that exact same lecture in 10 different cities,” Renjilian said. “We want something, as much as possible, [that] is uniquely Chautauquan.”

The mathematical difference between those who liked the program and those who did not — what Renjilian called a “net promoter score” — is one way the board has been evaluating Chautauqua’s programs.

For popular entertainment, for example, long-term ticket holders registered a net promoter score of only 2 percent for a Friday-night entertainment option.

Chautauquan Margie Buxbaum said the dissatisfaction with entertainment such as Friday concerts could be the loud volume that tends to go along with those programs, a statement met with applause.

In looking specifically at popular entertainment, Renjilian said the past sentiment has always been that category of programming would “pay its own way,” bringing in more single-ticket attendees.

“What used to be the case … of if you spend the money on big-name acts, you’ll make more money, is no longer true,” Renjilian said. “A couple years ago when we had our biggest loss. We spent an awful lot of money on performers. They just weren’t the right ones.”

Renjilian said spotting emerging acts, which might not have a high demand or high price tag, could help that. It just means finding them.

For the classical arts, Renjilian said the more the community learns about the programs, the more likely they are to enjoy them and return. He said the future lies in creating more opportunities to engage Chautauquans, featuring the efforts prominently in marketing and creating collaborations, adding that an inter-arts piece is in commission to feature music, dance and spoken word for next season.

Another topic of discussion was targeting certain minority groups, such as ethnic, religious and economic minorities. The Institution is able to bring in groups to experience Chautauqua that might not be able to otherwise through denominational houses. Renjilian specifically pointed to the African-American Denominational House, which received board approval in May. He said targeting audiences in themes and their elements is a way to expand the Institution’s reach.

Chautauquans Jane Finley, Debra Dinnocenzo and Jane Gross all brought up the topic of age, wanting to see younger audiences targeted and understood, as they will be the next generation of attendees. Dinnocenzo said she wants to see more emphasis on the digital brand.

“We took Chautauqua on the road decades ago and that’s how Chautauqua got branded,” she said. “We need to think about the digital highway and all the ways to leverage that. … This is still mecca, people will still want to come here. We won’t cannibalize this.”

In moving forward, Renjilian said the differences from years prior are the extra steps in research and marketing testing to understand the experience the Institution is putting out.

Next week, the board will hold its first of two open forums of the season at 9 a.m. Monday in the Hall of Christ. It will also start its porch discussions at 4 p.m. Thursday on the Hultquist Center porch.