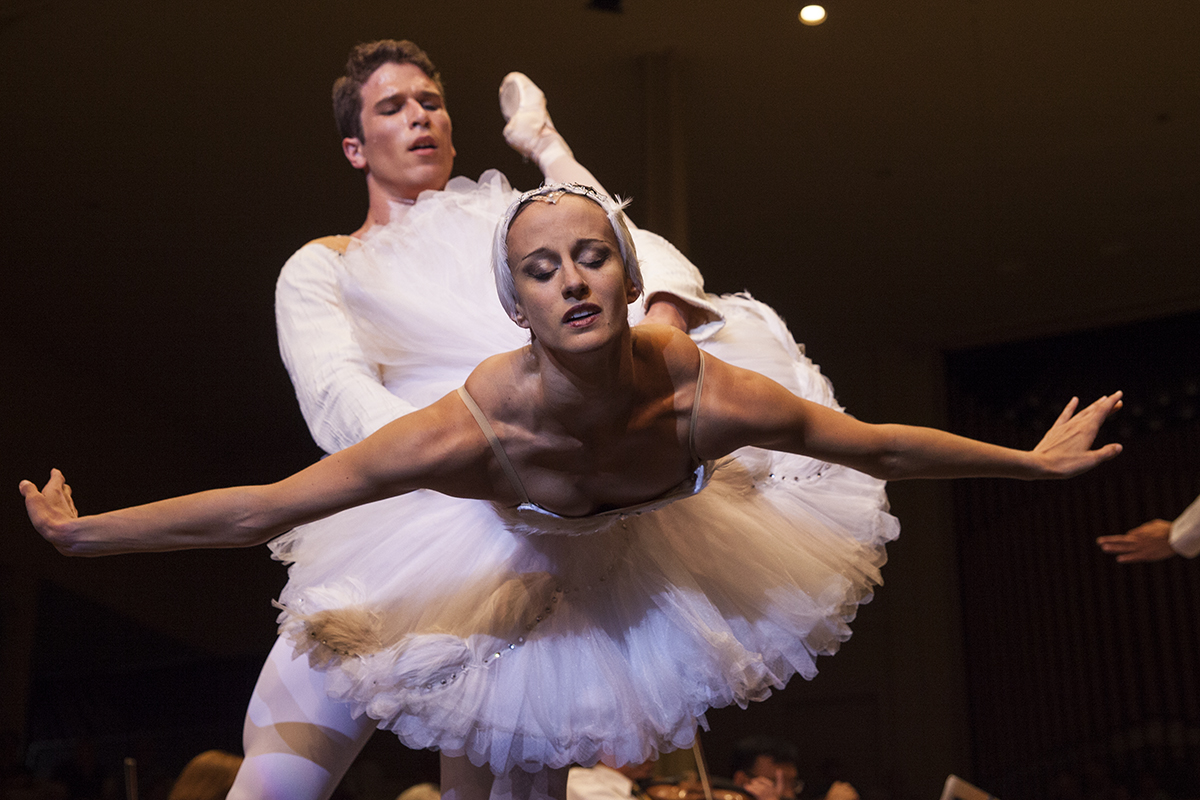 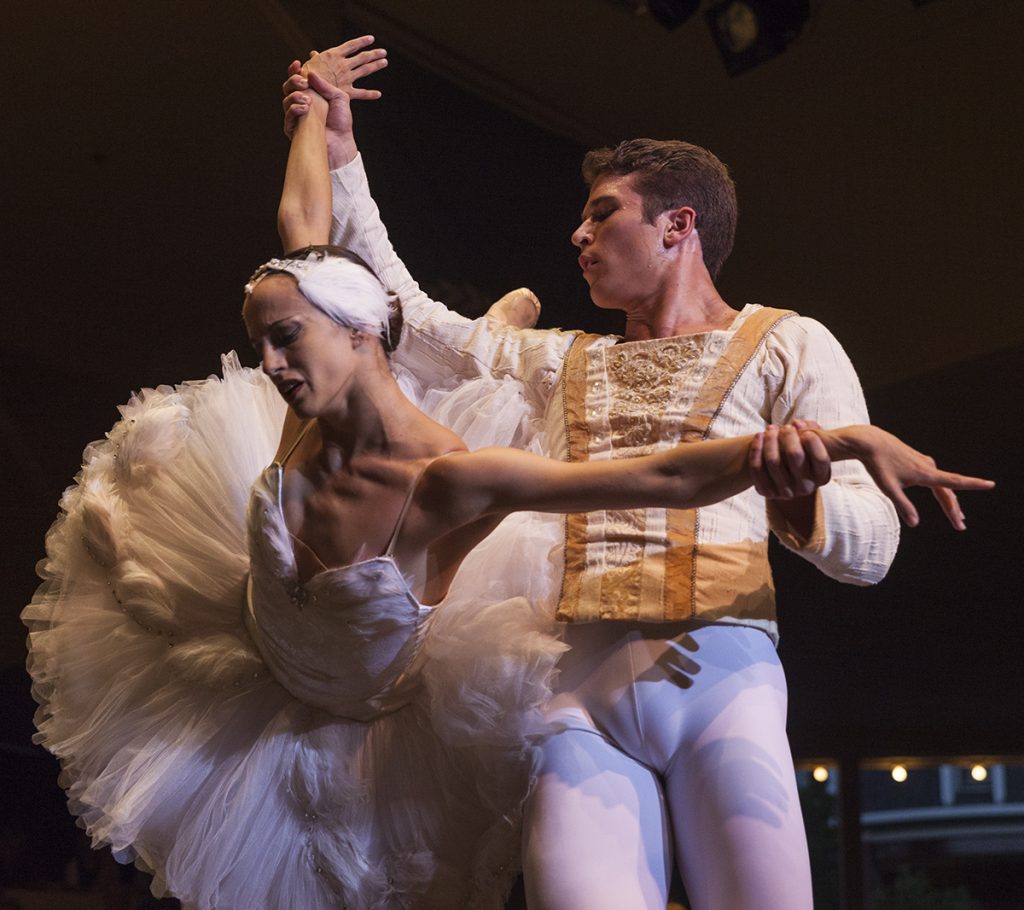 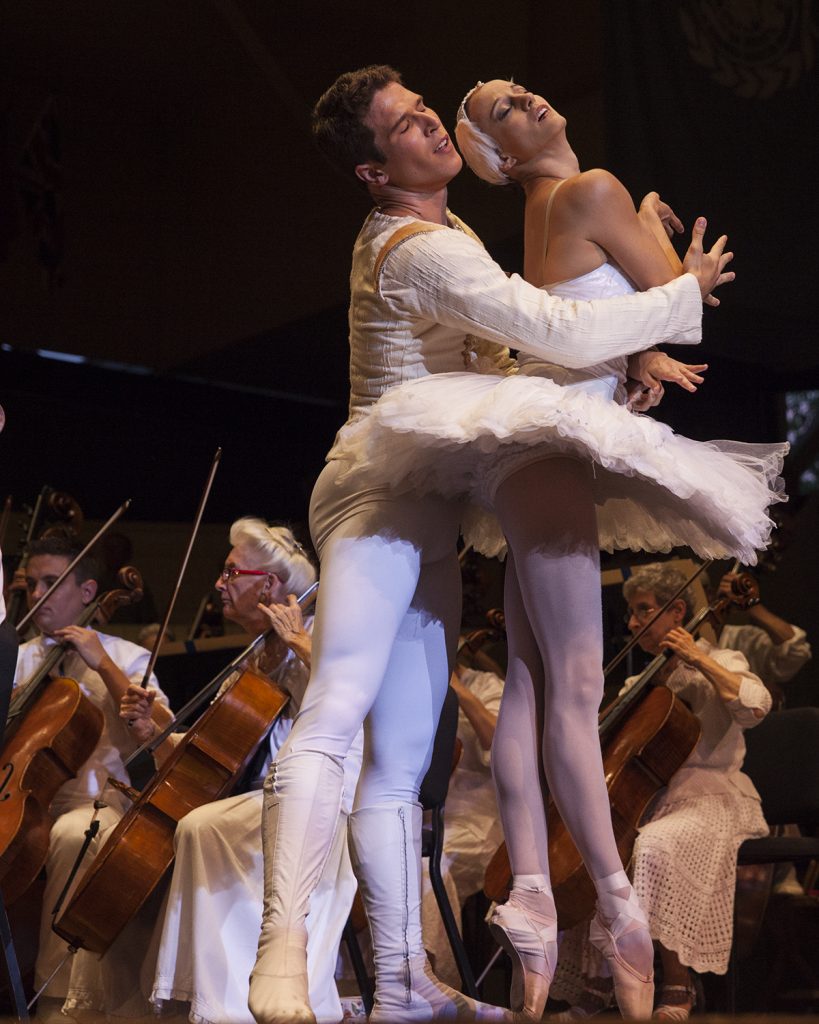 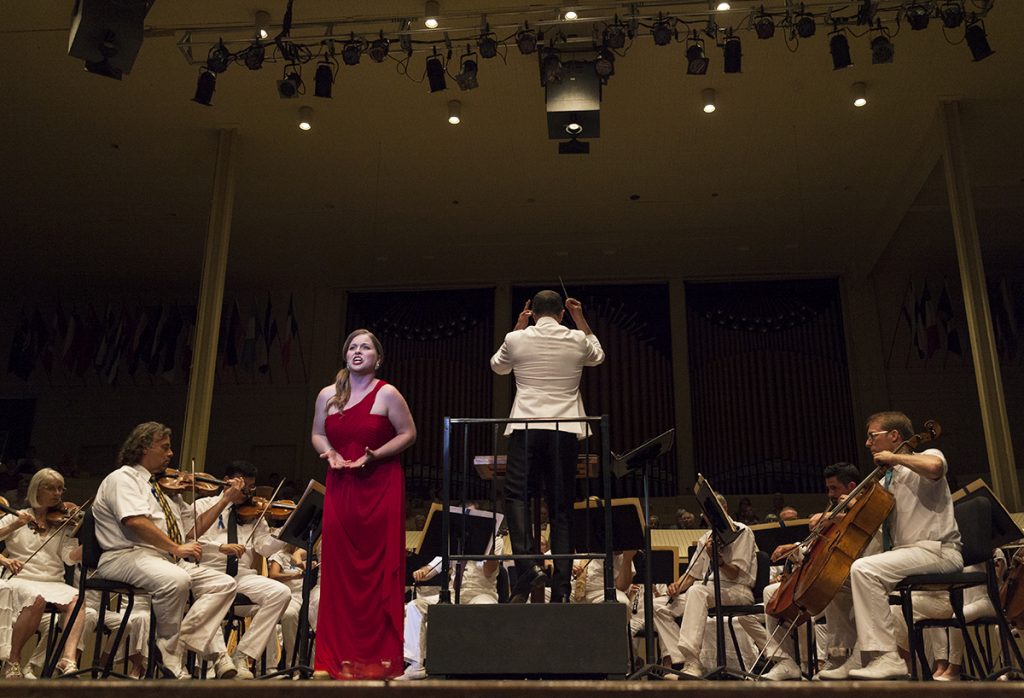 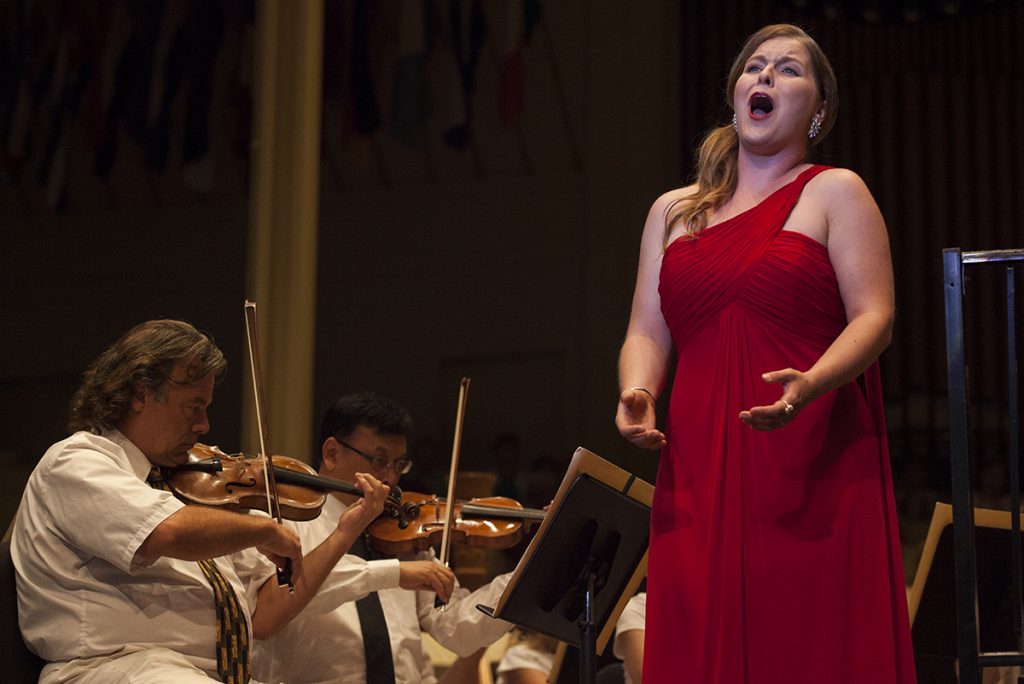 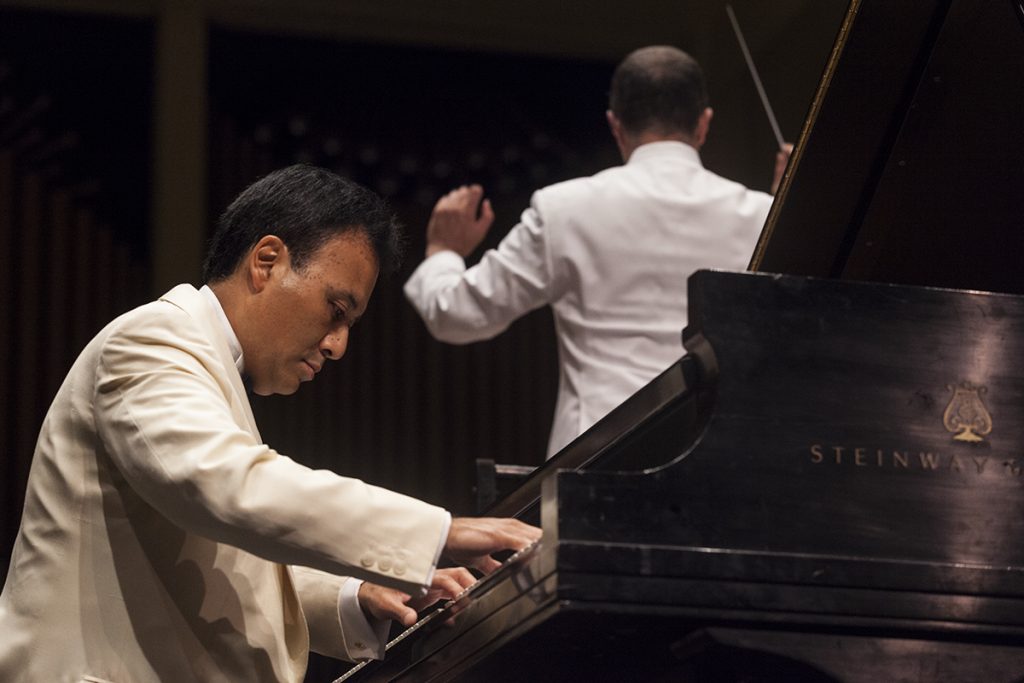 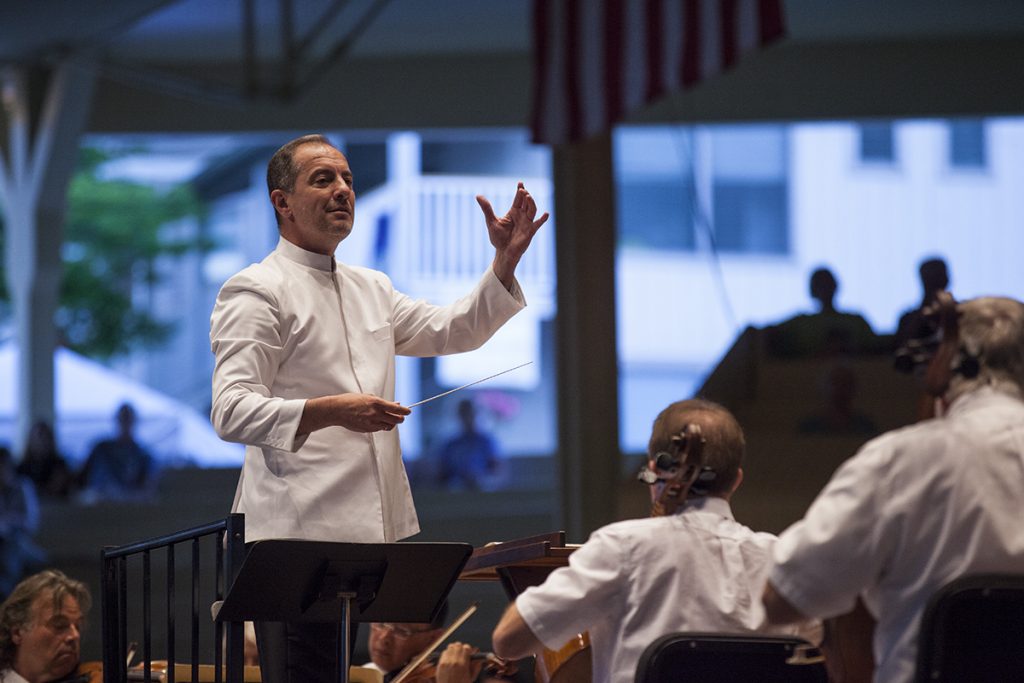 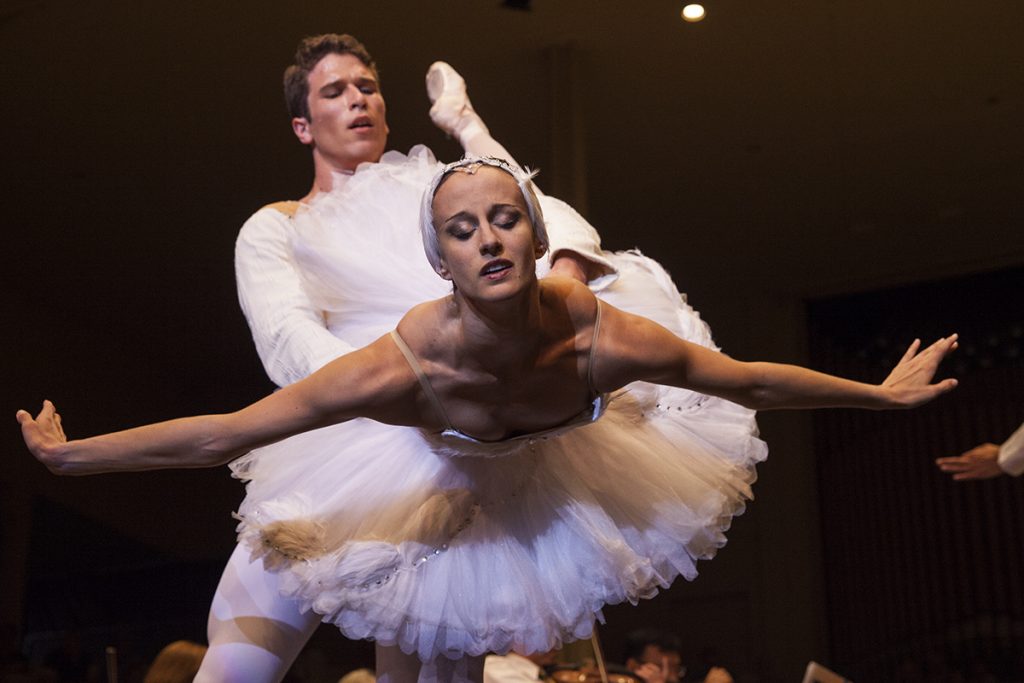 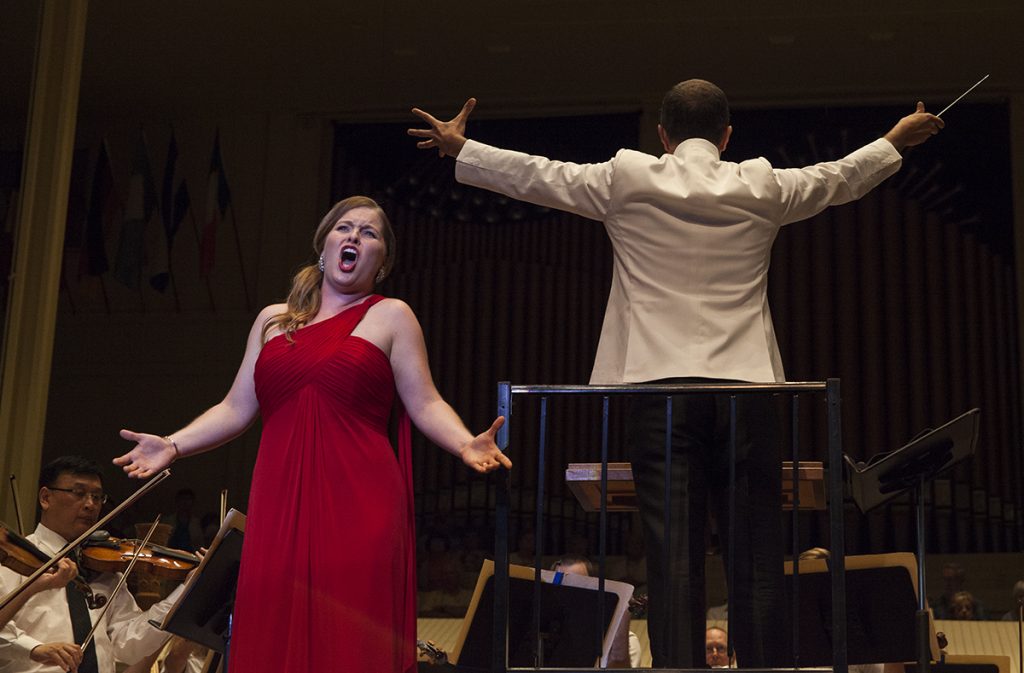 An evening far beyond breaking even, an evening in concert that few theaters can create.  Add, however, to the diversity and excellence of performance:

1. An interruption by siren

2. The return of the dog with the clanging collar

3. A second siren (but this one buried by the biggest bravura romantic concerto in the literature)

4. A surprise birthday salute by the orchestra and audience to a woman who wants no one to know that her birthday falls on July 26

5. And a warm-up fanfare from the horns, which likely had tonal purpose, but effectively drove audience and socializing musicians to their proper seats in a hurry.

It was after all, Chautauqua Symphony Orchestra Music Director Rossen Milanov’s total emersion treats, this one called “Total Tchaikovsky,” and maestro Milanov received more than he may have bargained. Maybe. It was very special.

The gift that is Chautauqua makes possible a quality orchestra with resident dancers, a soprano headed for residency with the Utah Opera Company and a dazzling pianist, winner of the Van Cliburn International Piano Competition, a friend of the Institution.

The tone of the evening was established in the short Polonaise from Eugene Onegin, with text drawn from Pushkin, Tchaikovsky’s opera score from 1877 to 1888, smack in the middle of a personally tumultuous six-year span that delivered an unusual number of masterworks in different forms. The Polonaise reveals the composer’s popular gusto — an amped up meter from fanfare and then to the deep quiet of the spirit. Yet one way or another, repeatedly back and forth between instrumental clusters, the notion of earnest gaiety prevails. As much as you can take. Tchaikovsky famously lacks no fervor for the emotions, nor yearning for the spirit.

And then we follow with Chautauqua Opera Apprentice Artist Abigail Rethwisch, soprano, with soaring powers. That was a theme for the evening, in fact — the ascending journey, the poetic flight, frustration at not achieving  departure. “Was I not a little blade of grass?” is one of Seven Romances, Op. 47, from 1880 in which a forlorn young woman grieves her parental arranged marriage to an older man.

She is a blade of grass, a rosebush, a flower, mowed down. This will be her fate.

Rethwisch’s mastery is in the colors she brings to the work, emotional shading, textures often within the same breath, and the sudden massing of her voice, as in her lamented acceptance of fate, suddenly filling the huge space of the Amphitheater.

She also is gifted in what the dramatist Harold Pinter insisted upon for readings of his poetry — knowledge of the difference among a breath, a beat and a pause. Rethwisch knows these things. And then the siren.

The siren interrupted her in a particularly quiet passage, during which the orchestra  had fully embraced her voice as an instrument. Maestro Milanov quick brought the performance to a halt. One cycle of the siren, and they readied to return to music, but another cycle ensued and so on for four returns, at which time, the singer and conductor left the stage, to audience approval. Soon they return, and begin from the start, again to applause.

Rethwisch’s voice gained power with this reprieve, leaning into the words with drama, drawing the audience to her lament. There was no need for translation. Her instrument carried meaning, and the audience quickly recognized with standing appreciation.

There was no intermission. A scene from Swan Lake, the pas de deux, timed next at 7 minutes, the others at six and four. Yet life inside these moments is each a universe — and then it disappears. All the more with the presence in front of the orchestra with two of the resident Charlotte Ballet’s finest dancers, Alessandra Ball James and Josh Hall.  Their tour de force was a master book of dance possibilities in one of the most famous pas de deux in the dance canon. Solid, steady, secondary, yet the perfect counterweight, Hall bursts upon the stage with an encirclement of grand jetes, heroically establishing his position, to welcome the swan, Ball James.

I have long held her as a force of nature, and here, again, by way of attention to detail, the spread of her fingers, as if to more closely approximate a bird’s wing, continued the perfection. In lifts, in slight birdlike flutters to the sound of the harp, in extensions from floor to her height, she sought flight, and it was magical, breathtaking. And she left, blowing a kiss to the standing, appreciative audience.

Jon Nakamatsu concluded the evening in a heroic performance from memory, without score, of the Piano Concerto No. 1 in B-flat minor, easily one of the most familiar and beloved pieces in the concerto form, typically three movements with a solo instrument, which can stand apart or discover complete integration with the orchestra.

The drama of power and supplication, might and gentility, lifts this piece to adaptation in motion pictures or in popular music. It is complex, packed with pyrotechnics and as gentle as that swan’s feather, floating in the airs. This, indeed, was the concert that wanted to fly.

Within the First Concerto we make a turn in the music and recognize the pleasure of an old friend, a wonder that carries the listener to that first hearing. And it is so tightly woven, that it still takes an audience by surprise, a sudden barrage during a quiet time, wound into the unexpected. Trombones, oboe, French horns in a give-and-take with the piano — and the consequence, say a bravura cascade scale at a level so assertive as to play as single instrument with a full orchestra as an equal. Waves of sound cross the orchestra, piano leading the way to quiet, then heroically, it concludes. What a flight.

The audience wouldn’t hear of stopping and kept at its appreciation until Nakamatsu yielded with an encore. An exemplary evening of programming and performance.

Anthony Bannon is director of the Burchfield Penney Art Center at SUNY Buffalo State. Previously he was a staff critic for The Buffalo News and director of George Eastman House in Rochester.

Beloved ‘Mikado’ Gets a Bizarre Facelift