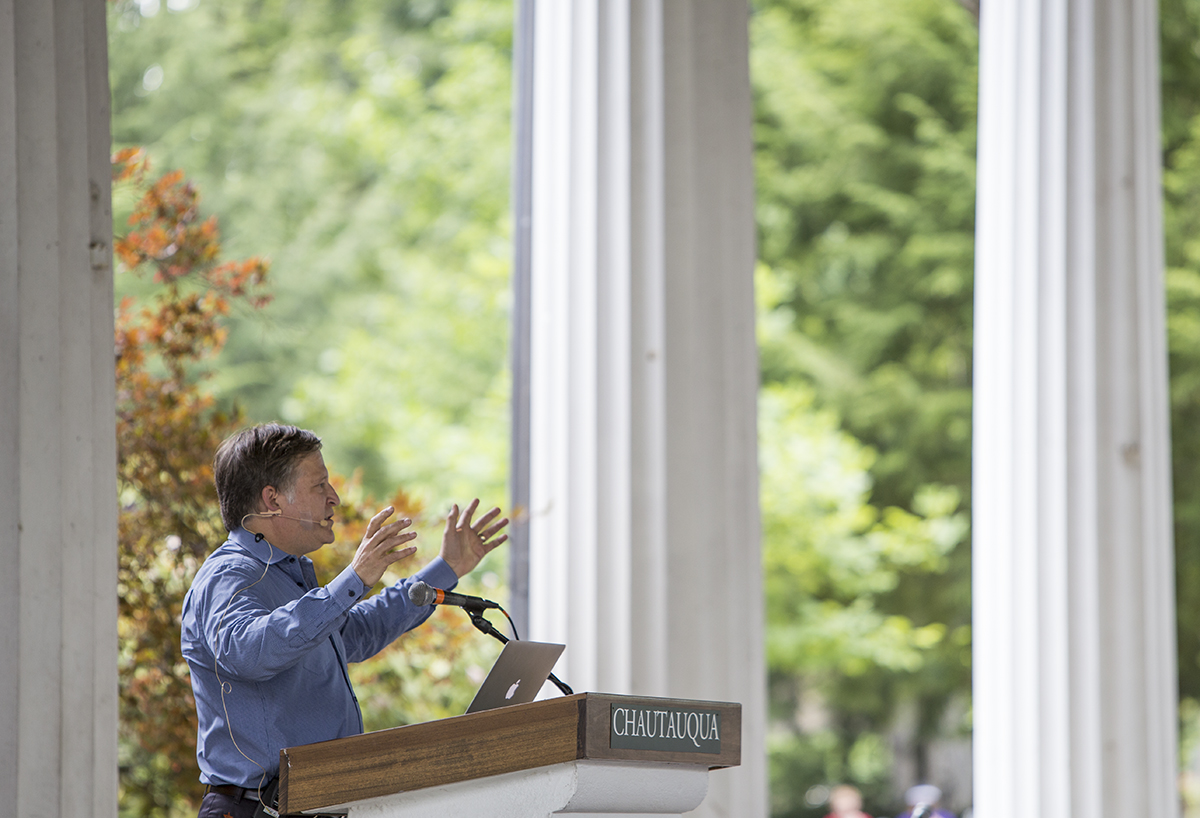 Bioethicist Paul Root Wolpe didn’t think he would receive much pushback. It was 2004, and in a meeting with top NASA officials, he had said the well-being of the astronauts should be the top priority in any manned mission to Mars. It was almost obvious, the same principle that has underlied western medicine since Hippocrates.

Yet one engineer raised his hand immediately. No, he said, I disagree. And Wolpe began to reconsider.

The problem was the ethics of medicine did not always apply to spaceflight, Wolpe said. In this case, the engineer said after spending $4 billion, the goal of completing the mission might outweigh the goal of astronaut safety. Because that’s the thing about ethical dilemmas or ethical differences, Wolpe said: It’s never a matter of choosing between something right or wrong or about people having different ethical systems — it’s about how one weighs competing values.

Wolpe discussed the decisions he faced as NASA’s senior bioethicist on the Interfaith Lecture platform Friday in the Hall of Philosophy. He also addressed NASA’s ultimate dilemma: Is it ethical to spend money on space explorations and for earthbound creatures to leave our Earth for millennia? Is it ethical not to?

To show the moral implications of leaving Earth to go into the cosmos, Wolpe began by outlining precisely what man’s place is in the universe he is trying to explore.

He recalled early years as a precocious child, eagerly reading about the speed of light and billions of stars in the galaxy. Then he came across a book that detailed just how big the universe is: 92 billion light-years across with 100 billion galaxies each containing hundreds of billions of stars.

“It made no sense to me,” Wolpe said. “We are less than a fleck on the back [of a bacteria], we were an atom on the fleck on a back of a bacteria on a grain of sand next to the Pacific Ocean. I couldn’t find a metaphor, and still can’t to this day, of how insignificant we are.”

As the son of a rabbi, Wolpe said that realization affected his theology: Why would the creator of this vast universe care about a speck? Then it occurred to Wolpe: life. Earth is the only planet humans know of that contains life, and even if life on Earth is not alone, it seems from all observation thus far that it is very lonely.

That means that in leaving Earth for explorations or in colonizing the cosmos, humans leave “the singularly most unique and precious planet that we know about,” Wolpe said.

That is not just a matter of location, Wolpe said, it is one of biology and psychology. All of human civilization has based itself on Earth and its rhythms. Philosophy, religion and science all grew out of that singular Earthly perspective. Holidays from Sukkot to Christmas arose out of harvest festivals dictated by the seasons. Art and poetry proclaim the splendor of the natural world. Biologically, a woman’s menstrual cycle is tied to the phases of the moon and circadian rhythms align everyone’s biology to the 24-hour day, so much that night workers suffer increased risks of cancer, diabetes, heart attacks and depression.

To leave Earth then, Wolpe said, is a radical reinvention of what it means to be human. It will change our theology, psychology and even biology. What will happen, he pondered, to the menstrual cycle and to circadian rhythms on Mars, a planet with two moons and different days and years? In going to space, Wolpe said, humans leave behind millions of years of evolutionary history and begin a new one.

“We tend to think of ourselves that we will be Earthlings on Mars, and we will be at first,” Wolpe said. “But sooner or later we will be Martians or something else.”

Not that Wolpe doesn’t believe humans should explore space — he does — he simply believes people should understand its implications for humanity. It’s what he does daily for NASA, pondering different ethical dilemmas from long-term goals to the nit and grit of which astronauts should go on a mission. He offered a glimpse of that decision-making process.

That view has broad implications for NASA’s missions because of the simple fact that exploration has always included massive casualties, Wolpe said, noting the exploration of the New World that left thousands of Europeans and millions of Native Americans dead. If exploration is an ethic in and of itself, then are casualties an acceptable risk in space flight? If an astronaut found a cancerous lump halfway on the first manned mission to Mars, Wolpe asked, is the health of that astronaut paramount or should the ship continue to complete the mission?

And then there are questions about exposing humans to massive amounts of radiation, Wolpe said, which would be necessary for a manned mission to Mars. There are questions of how to divide Mars once countries begin to colonize it. There’s questions of transporting human values like gender equality into space, as Russia has already said they will not send a mixed gender crew. There’s even, as Wolpe discovered in his first years at NASA, questions about protecting the “integrity” of other planets from Earth bacteria.

Finally, there’s the biggest ethical questions that’s arisen from discussing missions to Mars, as private technological entrepreneurs have already proposed it: Is it ethical to send people on a one-way trip?

“It violates every ethical principle I have, but that’s because I’m weighing them a certain way,” Wolpe said. “Will space exploration ask us to change that calculus?”