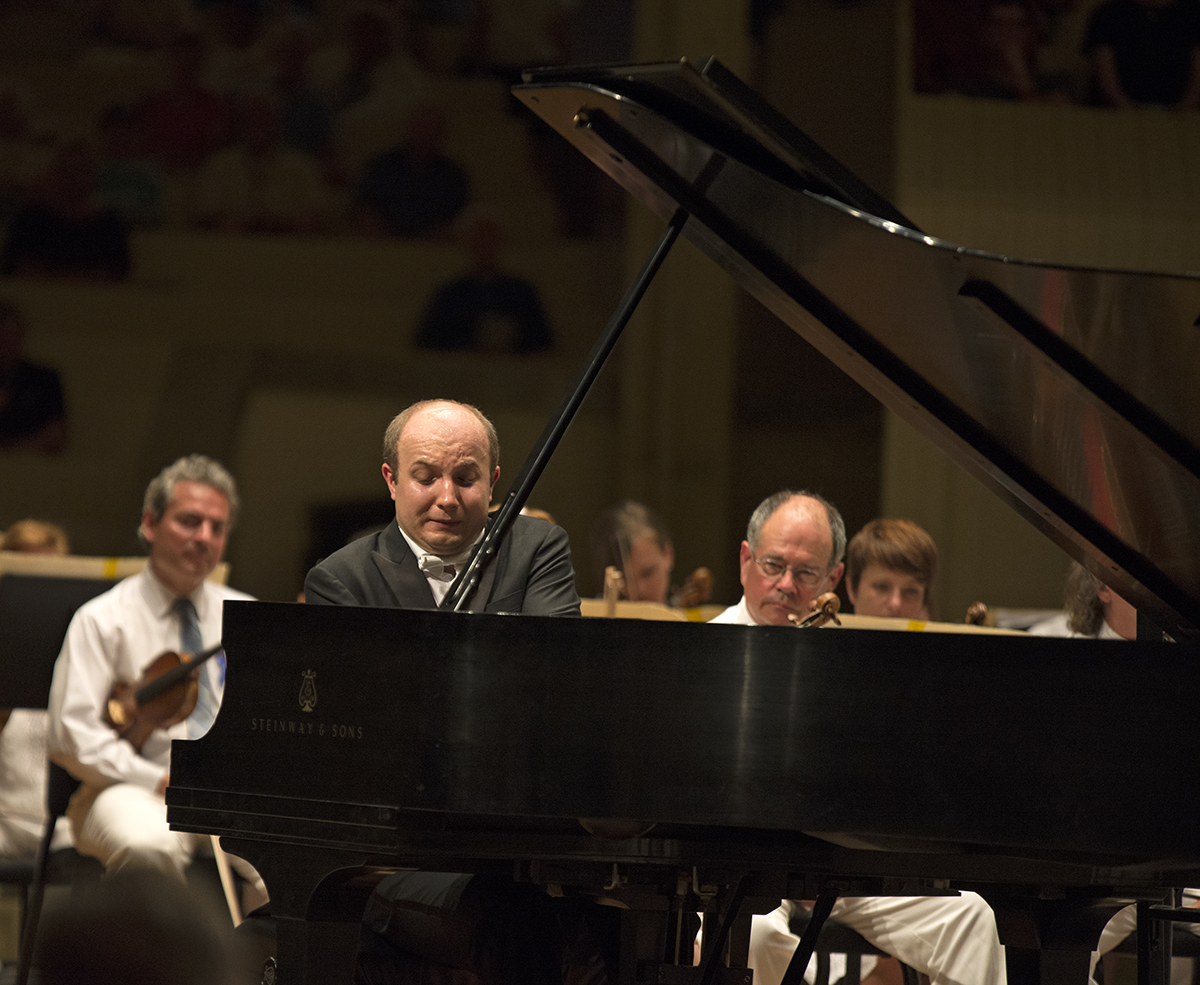 After a concert on Thursday evening that featured a world premiere (Annie Gosfield’s “Almost Truths and Open Deceptions,” apparently tepidly received), it wouldn’t be hard to see Saturday’s all-Russian program as a peace offering of comfort food.

Add pianist Alexander Gavrylyuk playing Rachmaninoff and a conductor in Rossen Milanov who is steeped in Slavic music, and you’ve got a sure thing, right?

But even that can’t-miss formula held a taste of the novel. Gavrylyuk didn’t play Rachmaninoff’s Concerto No. 2, one of the surest bets in the repertoire, nor did he reprise the Third Concerto with which he electrified the Amp three years ago almost to the day.

Instead he chose Rachmaninoff’s infrequently played Concerto No. 1 in F-sharp minor, Op. 1.  Don’t let the opus number fool you; the revised 1919 version played by Gavrylyuk was published after its two better-known companions.

Rachmaninoff himself was puzzled that the concerto wasn’t more popular, and it’s hard to disagree with him. True, the melodies lack the sticky memorability and cinematic sweep of those in the Second and Third concertos. Still, there were enough sighing themes to decorate two or three Joan Crawford weepers, and more importantly, plenty of opportunities for the Ukrainian-born Australian pianist to flash his monster technique.

This is Gavrylyuk’s 10th Chautauqua season, and he’s come to receive a hero’s welcome on his annual returns. The mere mention of his name in Vice President and Director of Programming Deborah Sunya Moore’s pre-concert introduction provoked whoops of delight from the nearly full Amp audience.

After the work’s opening fanfare, there were some unlovely sounds from the CSO in the concerto’s opening Vivace, which might be expected in such rarely encountered music, and the orchestra didn’t always deliver the purple-velvet sonority in the sweltering Amp, but that didn’t much matter. This was Gavrylyuk’s show, and he did not disappoint.

In the massive cadenza that closed the movement, Gavrylyuk hurled the requisite musical thunderbolts, but more surprisingly, he also made a lot of the deliciously Tristanesque irresolution of Rachmaninoff’s harmonies.

The orchestra rallied in the moonlit Andante cantabile second movement as Milanov whipped up billows of rich string sound with his left hand. Gavrylyuk made the most of the tender solo part, which was full of an eerie, dreamy longing for an old Russia that was crumbling around the composer even as he was revising the work. It was the high point of the performance.

The pianist skipped through the frolicsome Allegro vivace finale with light-footed ebullience, but he was most persuasive in the sighing slower passages. In this most Tchaikovskian of Rachmaninoff’s concertos, Gavrylyuk summoned Chopin instead.

His ovation was rewarded with two encores. In the first, “The Great Gate at Kiev,” from Mussorgsky’s “Pictures at an Exhibition,” there was plenty of grandeur in the closing passages, but Gavrylyuk, a native of Ukraine, emphasized the touching, prayerlike quality of the quiet central section, a hymn to his troubled homeland, perhaps.

The second encore was Rachmaninoff’s Prelude in G-sharp. Here the Romanticism had a more theatrical edge as Gavrylyuk pulled threads of silken melody from the keyboard, silently finishing Rachmaninoff’s musical sentences with flourishes of his hands as they ascended from the keys.

To open the concert, Milanov led a Hitchcockian performance of Rimsky-Korsakov’s arrangement of Mussorgsky’s “Night on Bald Mountain” that was scarier for what was held back, than for what was revealed. The brass was not beautiful in the quieter moments and there were some ensemble lapses in the atmospheric music at the work’s conclusion, but Milanov directed a swift, purposeful performance that was free of the cheap theatrics that tempt some conductors in this music.

More than half the audience cleared out before Milanov and the CSO offered Stravinsky’s tragicomic ballet, “Petrouchka” after intermission. Were they just there to hear Gavrylyuk? Did the tropical conditions in the Amp get to them, or does the presence of Stravinsky on the program still inspire terror 115 years after the work’s composition?

Whatever the reason, it was their loss, because they missed a performance that was strongly characterized, vibrantly colored and beautifully alive.

Quickly striding to the podium and immediately giving a downbeat, Milanov and the CSO plunged us right in the middle of the rush and clatter of Stravinsky’s Shrovetide fair and for 35 minutes or so, delivered supremely pictorial music making.

Even if you didn’t know the story of the poor, doomed puppet, there was no mistaking the Moor’s glowering menace, the ballerina’s teasing flirtation and Petrouchka’s strange and touching apotheosis at the end.

The orchestra’s playing wasn’t flawless, especially in some of the cruelly exposed solo moments, of which there are a lot. And you could sense the players’ stamina flagging in the closing pages, but they were really going for it (pianist Claudia Hoca and principal flute Richard Sherman were particularly heroic), and with their conductor, gave us a “Petrouchka” brimming with the vividness and narrative charm of a child’s picture book.

Better yet, I came away from the performance laughing out loud with wonderment at what absurdly great music this is.

And that might be the best programming strategy of all.