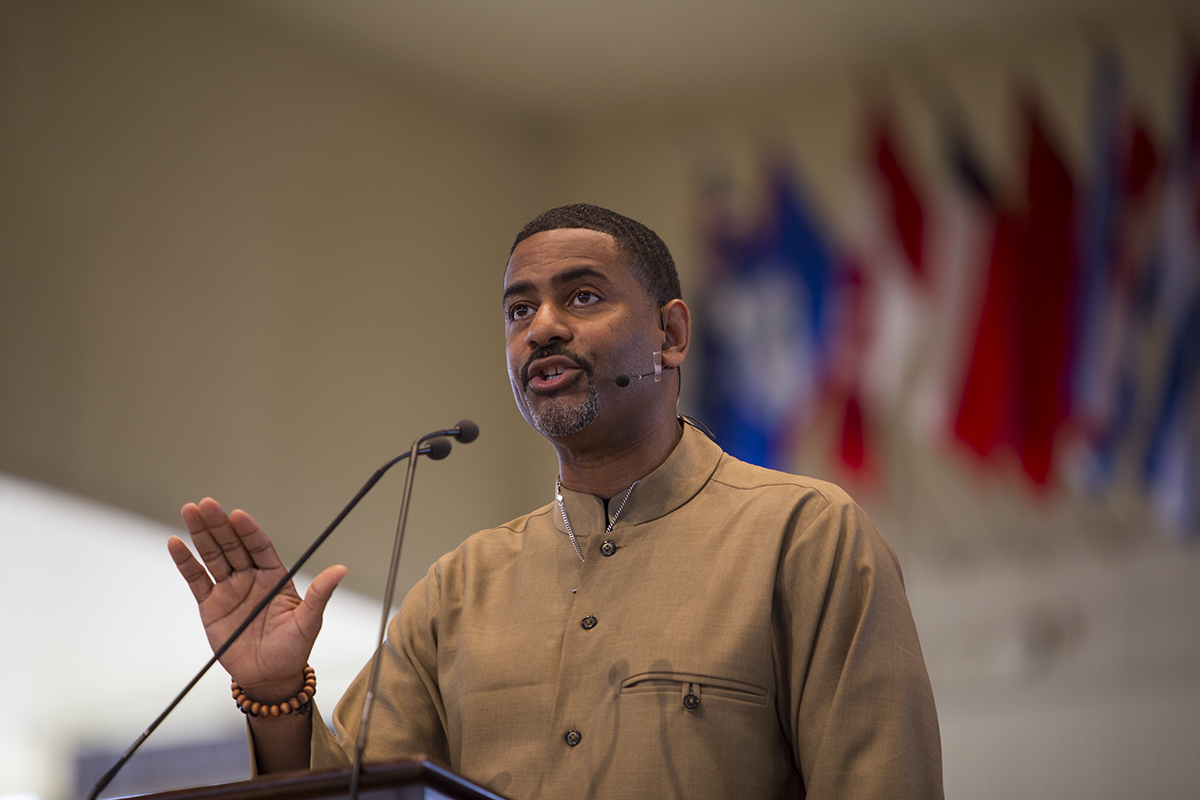 “God always gives God’s best. There has never been a mediocre sunrise, sunset or stars in the night. God never designed you to live beneath your call or your destiny,” said the Rev. Otis Moss III at the 10:45 a.m. Sunday Morning Worship. His sermon title was “Living Beneath Your Call,” and his text was Luke 15:11-32, the story of the prodigal son.

“God did not design us to be mediocre, average is not in your DNA. My father taught me that mediocrity is a sin,” he said. “God honors humility and there is no shame in failing if you are living up to your call.”

Familiarity with the story of the prodigal son creates tension and challenge, he said.

“I want to offer a different vantage point. As Dietrich Bonhoeffer said, this is a story about the scandal of grace, the depth of the father’s love without qualification,” Moss said. “It is about pure love and that is how God operates.”

Jesus was speaking to three groups of people: those who were marginalized, those who benefited from the current structures and those who did not approve of what he was saying and wanted to control what he was saying. In Luke, Jesus told two parables before the one about the prodigal son and gracious father.

The first parable was about a man who went looking for one lost sheep out of 100.

“He celebrates when he finds the one,” he said. “It doesn’t make sense in market ethics, but his heart breaks for the one.”

The second parable was about a sister who lost a coin and cleaned the house until she found it.

“She was excited because even though it was dirty, it had not lost its value,” he said. “God does not determine our value by externals.”

Moss said Jesus “broke it down so everyone would know about kingdom ethics, about grace. This is the story of a well-off family. The father had provided servants and a trust fund for his sons.”

The younger son demanded his inheritance.

“The son said, ‘I’m a man. I can handle things even though I am still living in your basement. Give me what is owed to me,’ ” Moss said. “ ‘The only thing I want from you is money in my pocket.’ He did not want his father’s values.”

“I like the way the father operates; he doesn’t fuss or curse,” he said. “Sometimes you get what you want but it is not what you need.”

The young man cut himself off from the older generation.

“There is an African proverb that says every time an elder passes, an entire library is lost,” Moss said. “There is something problematic when we cut ourselves off from wisdom.”

“He was putting Belafonte out of his own meeting, but Belafonte was gracious and left the room,” he said. “When you cut yourself off from your elders, you lose something; you don’t understand your history.”

To live beneath your call means you end up lowering your standards, he said.

“When you have money in your pocket you have friends; you are making it rain,” Moss said. “But in a famine, an economic downturn, you end up settling, end up lowering your standards, not doing what you are called to be.”

“I told him that’s what we do. He had only seen church on TV. Church on TV is only about material things,” Moss said. “I had to educate him that he come from a long tradition; his freedom came from people of faith. I told him people were praying for you before you were born.”

The church has settled, Moss said, and become known more for what it is against than what it is for.

“So many young people love Jesus but can’t stand the church,” he said. “The church has become the taillight, not the headlight.”

Moss gave an extended, dramatic presentation of the young man, hired to feed the pigs even though he was Jewish, about to eat the slop he is feeding them. He is “ankle deep in ‘minutiae’ [excrement] and what used to turn his stomach now smells good. He pulls up gray and green matter and it oozes down his arm.” Moss raised his arm to demonstrate the slime going toward the young man’s mouth.

“Then, suddenly, he shakes it off his hand and says, ‘I’ve changed my mind; I’m going home to my father.’ He is ready to be contrite but he does not know the depth of love of his daddy,” Moss said. “His father is sitting on the porch, like a Chautauqua porch. He waited for him all season and one day he sees a figure coming. He remembered the arrogant walk of his son but there is humility in this walk.”

That story is really about a father who loves his child, Moss said.

The Rev. Robert M. Franklin, Jr., head of the Department of Religion, presided. Alison Marthinsen, part of a six-generation Chautauqua family, read the Scripture. The Chautauqua Choir, under the direction of Jared Jacobsen, organist and coordinator of worship and sacred music, sang “Shed a Little Light,” by James Taylor with choral arrangement by Greg Jasperse in 2013 and Christine Micu in 2015. The Voices of Trinity Choir, from Trinity United Church of Christ in Chicago, sang “Give Us This Day,” by Edwin Hawkins. The choir was directed by Joi Buchanan-Johnson and accompanied by Byran T. Johnson, executive director of sacred music at Trinity, on the piano and Curtis McKenzie on drums. The response after the morning prayers was “Lord, Listen to Your Children Praying” by Ken Medema with choral arrangement by Jack Schrader. The joint choirs performed “Oh Happy Day,” by Edwin Hawkins, choral arrangement by Mark Hayes. The organ postlude as “Toccata and Fugue in D, S. 565,” by Johann Sebastian Bach. The Gladys R. Brasted and Adair Brasted Gould Memorial Chaplaincy provides support for this week’s services.