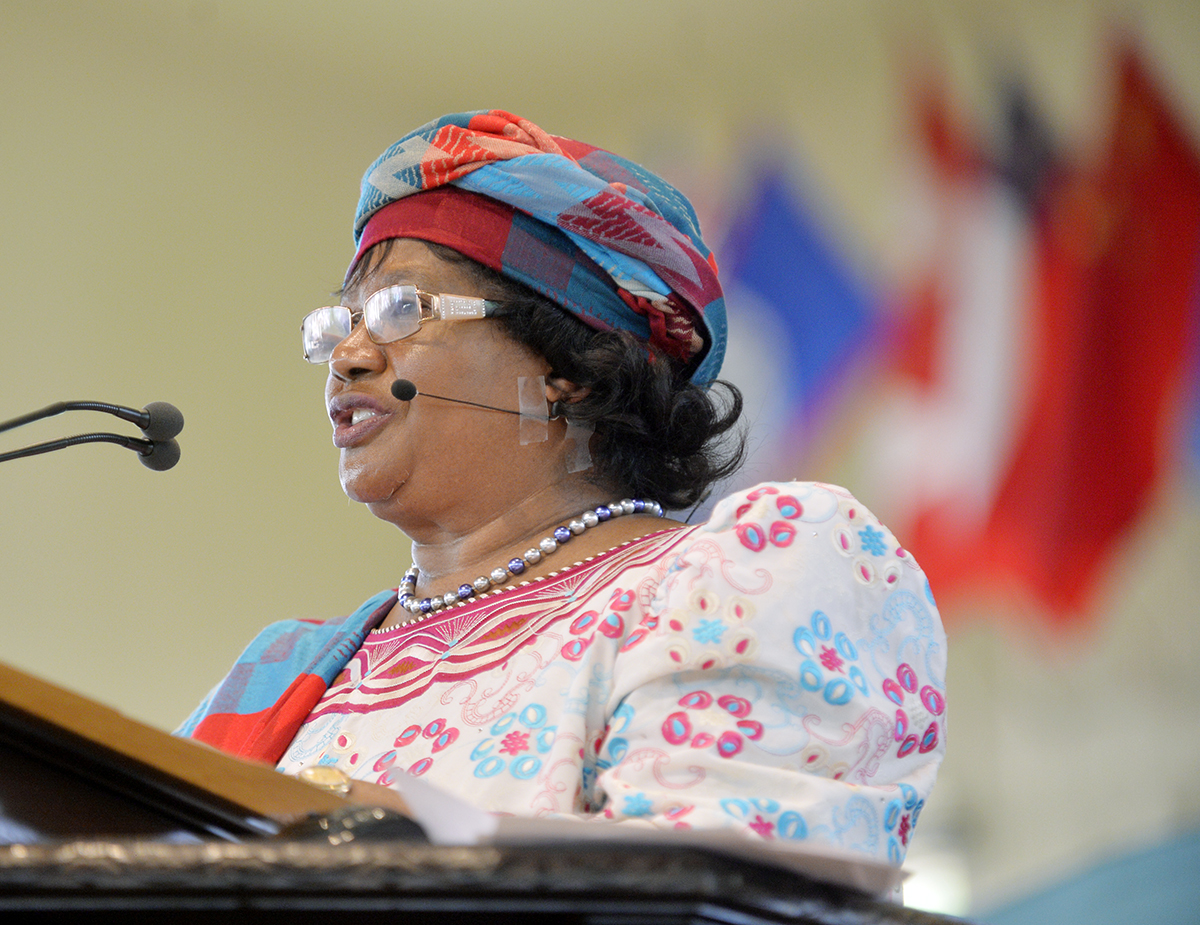 Banda continued the discussion of “Moral Leadership in Action” during the 10:45 a.m. Wednesday lecture in the Amphitheater by defining her own personal idea of moral leadership in conjunction with servant leadership. She incorporated her experiences as a political leader and as an activist for the rights of women and other marginalized groups in Africa.

“The economy had virtually collapsed,” Banda said. “I realized as president that I had to make moral and painful decisions to deal with the situation. Yes, these were painful decisions which could potentially make me unpopular. As a nation, we had to walk on the path of reforms, and, as a nation, we made a decision together to walk that path.”

Banda said she valued the “good of the nation” above her popularity among the citizens of Malawi. She said she felt it to be God’s will for her to fight corruption and vowed to follow His path for her.

Despite the difficulty of the goals she set for herself, Banda said Africa needed moral support and a leader who led with morality and servitude.

“It is not easy to fight corruption,” Banda said. “As you square up against very powerful people and they fight you back, they bring you down.”

To Banda, leadership should focus on the needs of the people even if it is not the popular path. She said she trusts in what the Holy Bible, specifically the Book of Proverbs, taught her: “The fear of the Lord is the beginning of wisdom and knowledge of the Holy One is understanding.”

Banda used that verse to define what kind of leader she would be during her presidency — a leader who bases her decisions on mutuality, the common good of the people and a shared vision.

Banda discussed the idea of servant leadership and the connection it has with being a moral leader.

Banda said the world has seen a shift in power from dictators to democrats and from leaders to the masses. She described this as an era where leadership is defined with a promise of political morality, which leads to the war against corruption.

“The general public has faith in their leaders,” Banda said. “Leaders who occupy political positions rather than using national resources to promote the well-being of their people, they use their political office and positions to [use] wealth of their countries for their personal enrichment.”

A member of the audience asked Banda what kind of political conflicts Malawi faces today. Banda said the nation faces internal conflicts between the various tribes living within its borders, instead of the countries who formerly colonized Malawi.

“What saddens me [is that] I have noticed that before I came into office, there were so many killings and crime increased, so that tells us that when poverty increased, when people are hungry, they go out and break the law,” Banda said.

Banda said part of the issue of corruption came from the transition from a dictatorship to a democracy. Corruption was not such an issue during the dictatorship because more laws and consequences were in place to prevent it. For example, Banda said if a politician stole from public funds, that individual would be sentenced to 13 years in jail.

“[Political leaders] had become part of the problem for communities and not a solution of the many problems communities are struggling with, especially corruption, abuse of human rights and tribalism,” Banda said.

Though Banda said she is not against democracy, the country did not fully understand what becoming a democratic nation meant when entering the new era.

“When freedom came, we misunderstand it and misused it and abused it,” Banda said. “We thought that meant you can do whatever you like. What we didn’t know is that human rights come with responsibility.”

Banda believes in transparency, and she let the people know where the nation stood before and after leaving office. She also believes in “sacrifice for the sake of the people.”

Banda said she felt the need to make some changes in the presidential lifestyle she inherited: She sold the presidential jet and the 60 luxury cars she owned. That money was then donated to people with disabilities. The economy grew by 6.3 percent by the end of her term.

For Banda, there was a clear guideline for how she would rule as president of her country: Malawi comes first.

“It takes courage for you to stand up for the rights of the people, and if it is true what I’ve said, that leadership is a love affair, then you would not allow your people to be exploited,” Banda said. “You will stand up for what is right.”