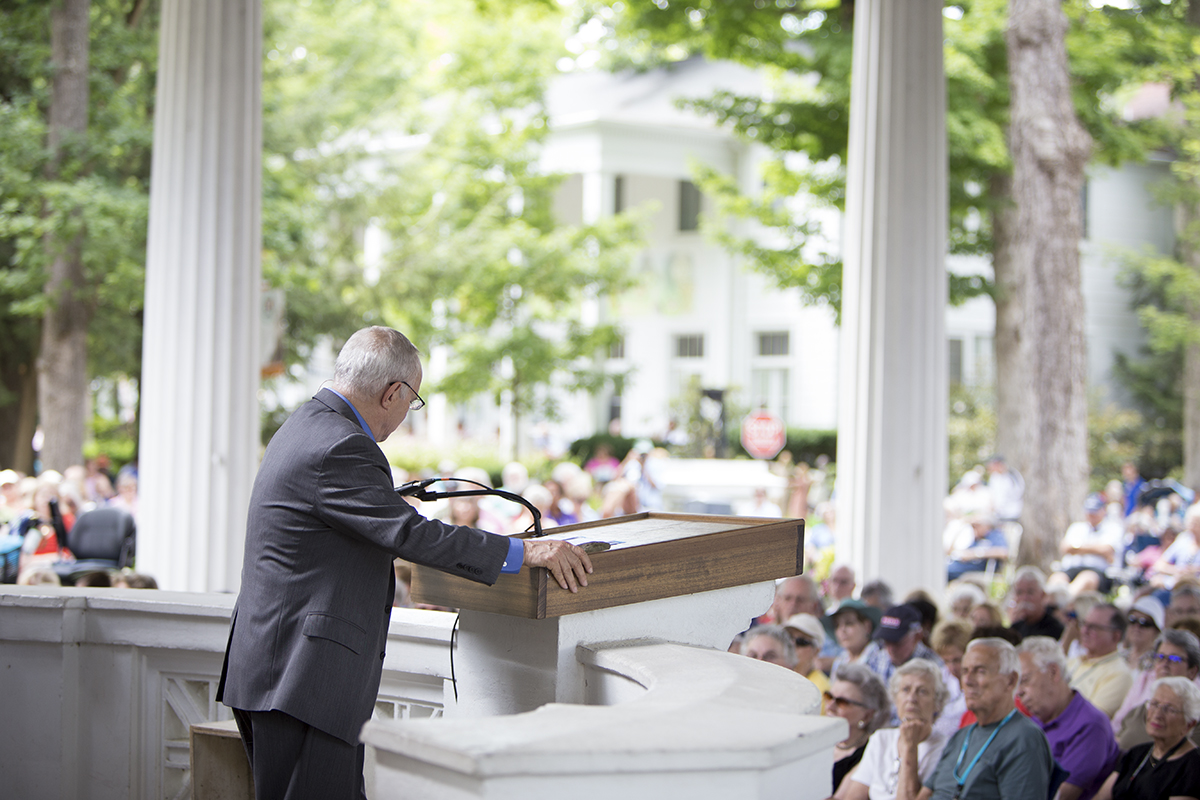 Speaking on the Interfaith Lecture platform Tuesday afternoon, Saperstein said religious freedom was an inalienable human right and the cornerstone of any peaceful and prosperous society. He recited tragic stories of religious oppression and conflict, and of leaders standing up against intolerance. He called for Americans to help set an example for how religious diversity can foster a prosperous society and improve the well-being and religious practice of all faiths.

“Despite all the challenges religious communities face, in every country I’ve visited — except the most repressive, North Korea — churches, mosques and other houses of worship are bursting with religious fervor, with piety, with song and with young families,” Saperstein said. “I became more convinced that without interfaith dialogue, there can be no democracy, no lasting security. But with it, anything is possible.”

That repression is not only immoral, Saperstein said. It is also dangerous. Religion can help serve as a moral compass in society and often provides much-needed services such as medical care and counseling, Saperstein said. But when states try to oppress religious groups, Saperstein said, the opposite happens.

“Such actions by a government drive religious life underground, makes it less transparent to the public and often fills the followers of particular repressed religious groups with anger, frustration and despair,” Saperstein said. “That produces fertile field for extremists who promise to change their government and allows them to sow their seed of hatred and divisiveness.”

For that reason and others, Saperstein said, the U.S. tries to encourage religious freedom and work with religious groups around the globe. Faith, Saperstein said, allows him and his colleagues to find common ground with those groups on important American foreign policy interests, including climate change, human rights and economic justice. When religious freedom is suppressed, those goals are harder to reach.

Yet the U.S. is not alone in this fight. In rapid succession, Saperstein delivered tragic tales of religious, local and political leaders around the globe working against the odds to ensure religious liberty.

In Pakistan, Shahbaz Bhatti, the federal minister for Minority Affairs, and Salman Taseer, governor of the Punjab province, were assassinated in 2011 for speaking out against blasphemy laws and in defense of Asia Bibi, a Roman Catholic woman sentenced to death for blasphemy. In 2015, the Supreme Court of Pakistan finally suspended her sentence. In a separate ruling concerning the bombing of a church, the same chief justice delivered a decision that established freedom of religion even for those who disagreed with dominant views of their faith. He also established a taskforce to protect religious minorities.

In England today, the first Muslim mayor of London, Sadiq Khan, has taken a strong stance against anti-Semitism, Saperstein said. Before that, Pope John Paul II spoke out against anti-Semitism, the Holocaust and religiously repressive communism in Eastern Europe. In the U.S., he said, almost every religious community has stood against the rise of Islamophobia.

And yet, in other cases, protest and interfaith actions weren’t enough. In China, authorities arrested a human-rights lawyer defending a Christian community against the government’s efforts to remove crosses from their city. They held him incommunicado for months and then coerced him into a confession on national television, Saperstein said. In Afghanistan last year,  a girl was falsely accused of burning pages of a Quran and a crowd beat her to death as police looked on.

“The stories of moral leadership I shared this afternoon should give us hope and inspiration but also remind us of the very challenges that we face,” Saperstein said. “And we have such a long way to go.”