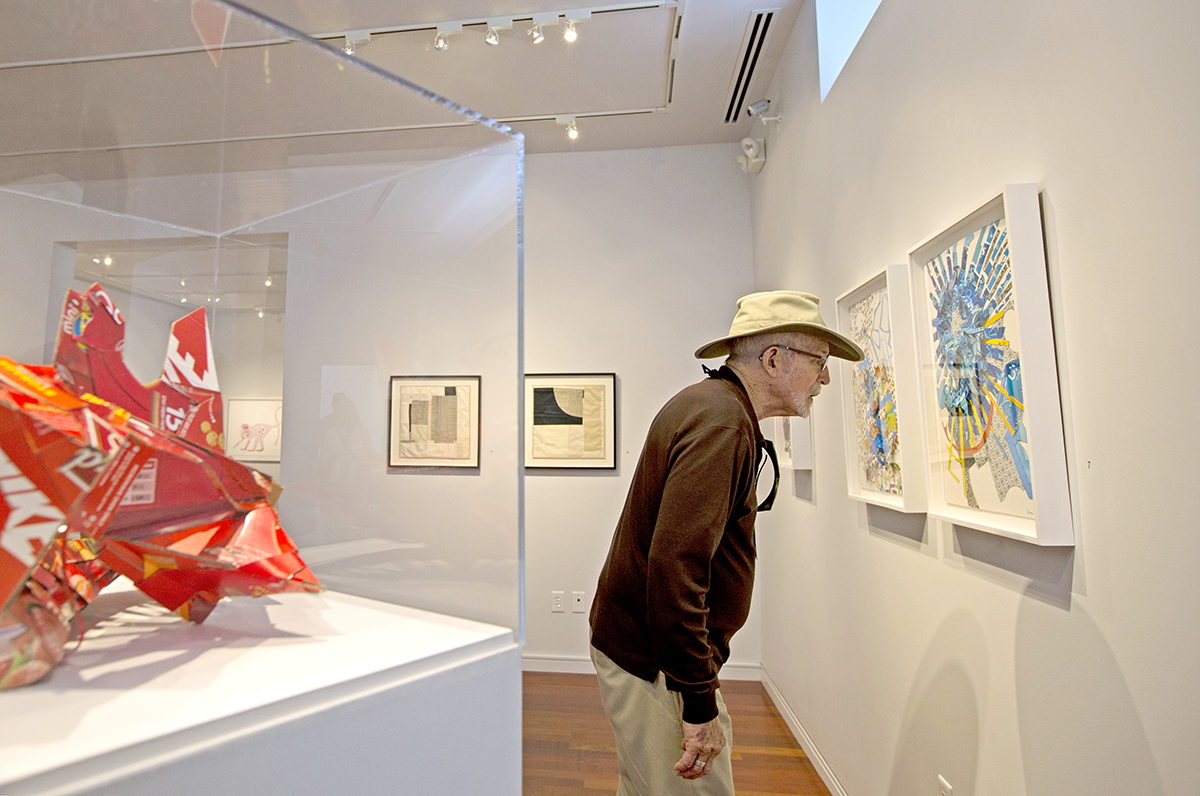 Collage is so widely accepted as a technique that it’s easy to forget just how radical its invention was a little more than a century ago. (Most art historians credit the first collages to Georges Braque in 1912.) But as simple as the notion of pasting a piece of found flotsam into a composition may seem today, it was the invention of fire as far as Modernism was concerned — the torch, as it were, that lit the way for cutting-edge artists in the 20th century. Collage breached the wall between quotidian realm of daily life and the rarified, idealized domain of fine art. And the form continues to surprise, as this spirited show at the Fowler-Kellogg Art Center clearly attests.

On view in the second-floor gallery, “The Art of Making Collages” features a group of artists who each in their own way take the technique in refreshingly inventive directions, running the gamut from abstract to figurative to somewhere in between.

First up is Lisa Hoke, a New York artist known for enormous wall reliefs and room-filling installations made from commercial packaging and paper goods sourced from supermarkets. Her contributions here consist of small sculptural pieces such as “Sunnyside,” in which she’s woven cartons for Cheerios, Nilla Wafers, Glad trash bags and Bayer Aspirin into something that looks like a terraced cliffside from one angle, a cubistic house (speaking of Braque) from another. The result is fizzy and eye-catching, and also oddly subversive.

Debra Smith majored in fiber art at Kansas City Art Institute and earned an associate degree in applied science at the Fashion Institute of Technology, and it shows in her serene abstract compositions made of stitched-together pieces of vintage silk. She borrows extensively from the lexicon of 20th-century formalism, especially in her use of geometric and linear elements. “Memory Trace 1” and “Memory Trace 2,” for example, feature patchworks of white and off-white rectangles in varying shapes and sizes as backgrounds for red intersecting lines that create the impression of an architectural plan, as if the artist were reconstructing a significant room from her past.

Much like Smith, Bill Miller uses a vintage material for his work — in his case, pieces of linoleum piled into 3-D relief. He uses the original linoleum colors for his palette, creating a wide range range of naturalistic effects, from landscape greens and browns to figurative flesh tones. Memory and reverie collide in those works along with references to art history and famous events: “The Dream of Bill,” for instance, pictures the artist asleep as the famous picnic scene from “Edouard Manet’s Luncheon in the Grass” hovers above his bed, and “Eager Children Cry” is based on the searing photo of a young woman wailing above the dead body of a student killed in the Kent State shootings of 1970.

Paul Klee and outsider art are some of the influences cited by Mary Jones, and both are certainly evident in the spindly lines and mismatched proportions she employs to depict figures. There also hints of Saul Steinberg’s New Yorker illustrations and the raucous, cartoon expressionism of Chicago’s Hairy Who movement floating about in scenes that center on portrayals of families or social situations. The imagery is dotted here and there with minute textual fragments — street maps, for instance, or bits of Arabic writing — that reinforce the surrealistic, off-kilter character of the work.

Chimerical creatures haunt drawings and digital prints by Patricia Bellan-Gillen, who in two monochromatic images marries fine renderings of animals with scads of tiny drawings pasted across them. One image in blue features a bear’s head atop the outline of a woman’s body draped in a dress covered in teardrops, each bearing a grimacing face; another in red pictures a baboon seemingly oblivious to a plague of anthropomorphized flowers subsuming its body. Both pieces are vaguely unsettling in the way they blend cheerful and creepy.

David Montano’s dense, intimately scaled collages on discarded book covers are cobbled out of old engravings and other illustrations. Culled from antique catalogs, architectural tracts, encyclopedias and random bits of Victoriana, many of the works are centered around images of baroque theatrical prosceniums. One crowns a teetering patchwork tower of building elements (gables, window frames, dormers) in the ornately titled “Final Epistle to God Via Abandoned Makeshift Sky.” Meanwhile, “Proposed Cover for Frank Norris’ ‘Vandover and the Brute,’ ” which pictures a wolf-headed Edwardian gentleman in a drawing-room setting, suggests a combination seance, magic show and satanic ritual.

Chaos emerging from order seems to be the underlying theme of Kent Rogowski’s recombinant jigsaw puzzles, in which idyllic images — mountain landscapes, floral bouquets, horses grazing in meadows — are jumbled into a visual mess. Perhaps that may be overinterpreting the artist’s intent, but if you were think of his puzzle pieces as a pixels, you might discern a cautionary tale about digital technology within his errant forays into an otherwise prosaic, rainy-day pastime.

Collage revolutionized 20th century art for the simple reason that no other medium was as flexible or open-ended. For proof that the same remains true today, look no further than this smart, tightly organized show.