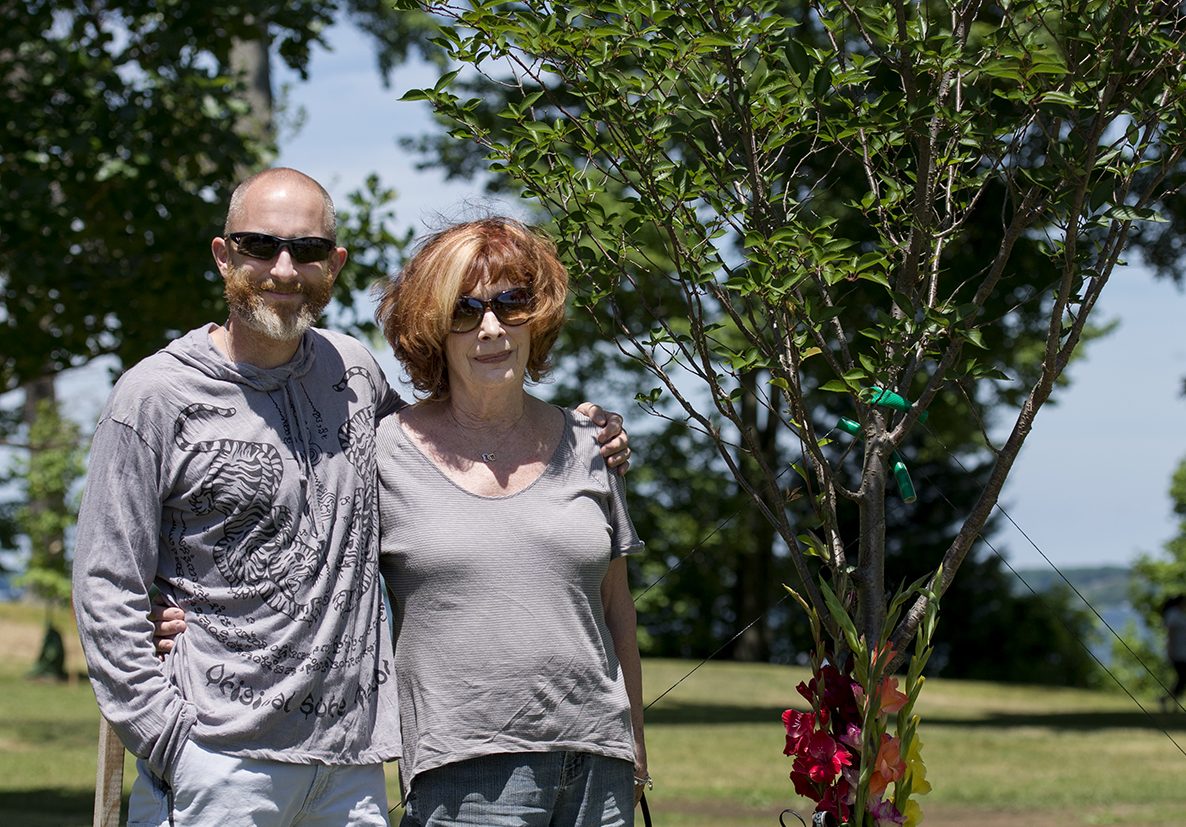 Who was Jerome C. Hackett?

His family would describe him as a loving father and admirable husband. Exceedingly kind and clever, he never hesitated to unleash his sharp Irish wit. Preferring a life both empirical and simple, he was a born teacher with a knack for exceptional storytelling, though not so much mechanical handiwork.

He was also a man of conflict and contradictions, harboring a tortured soul, his thoughts tending to cling to the cynical. Having forged a truant disposition from an early age, his feet and mind perpetually wandered. An adopted son of Chautauqua, he was foremost a citizen of humanity.

On June 4, 2015, at the age of 78, Hackett passed away quietly in his sleep. He had ultimately succumbed to congestive heart failure brought on by complications from chemotherapy, previously suffering from melanoma that had metastasized on his ear.

Four months later, on Sept. 30, the Hackett family planted a Sargent’s cherry tree in memory of Jerome at Miller Park with the help of the Chautauqua Foundation.

Dusty Nelson, director of gift planning, and Betsy Burgeson, supervisor of gardens and landscapes, played integral roles in the development and completion of the mission, assisting in tree recommendations, location scouting and physical plantation.

“Betsy and Dusty have been so engaged in terms of staying in communication with [us],” said Jon Hackett, Jerome’s youngest son. “Just really great people making us feel like that’s a really special tree and project. Hopefully this will inspire other people, particularly since we’ve lost a lot of trees here around the Institution.”

The Hackett family said Jerome was inclined toward the Thoreauian lifestyle, indulging in the modesties of life. As he was neither a man of pomp nor extravagance, a quandary was presented for the Hackett family: Jerome had specifically requested he did not want a burial. Instead, he chose to donate his body to science, and was later cremated. The Hackett family thought the Sargent’s cherry would be an appropriate commemoration, in line with Jerome’s sensibilities.

They elected to take it a step further and truly make it Jerome’s tree. Given Chautauqua Institution’s prohibition on tree plaques, the Hackett family, with special permission, placed a Pelican box — a waterproof storage case — in Miller Park as well. Acting as a type of time capsule, it also utilized itself as a summation and token of Jerome’s life. On the off chance that the tree was ripped up or removed, the family wanted assurance there would still be a shadow of Jerome present.

Some of the container’s contents are coins from 2015, a brief written biography, a folio of pictures saved by both the family and Jerome, and Jon’s Bronze Star Medal. Jon had recently retired from the United States Marine Corps. Jerome had been unable to witness his son receiving the decoration, so Jon thought it fitting to include it among the emblematic memories of his father.

Of all the pieces in the collection, there is a picture of Jerome that Jon is partial to: a black-and-white family portrait of Jerome, a toddler with his parents. It was Jerome’s impish, sullen countenance that struck Jon as his father sat propped on his grandmother’s lap, bundled in what would presumably be a doubled-breasted woolen coat.

“The look on his face that young, that expression could have been Dad at 30 years old,” Jon said. “It just somehow captures his essence and spirit. I’m sure he wasn’t happy to be there wearing that ridiculous suit. As early as that picture is, it captures his personality completely.”

Jerome had an arduous upbringing, saturated with strife. At the age of 5, and then at 7, Jerome’s mother and father died, respectively. Jerome would go on to live with grandparents and aunts, all short-lived. That feeling of potentially being orphaned was a fearful concept for Jerome.

“In terms of always trying to find that sense of belonging, that sense of family, desiring a place of his own where he could throw down his roots, I think Chautauqua was that anchor point for him,” Jon said. “That place where he finally found contentment. A place he could call home.”

It took Jerome some time before he stumbled upon Chautauqua.

Raised as a Roman Catholic, faith was an important facet of Jerome’s being. But as time passed and outlooks changed, those deep and pious roots became harder to wrench out, later adding further conflict.

After high school, Jerome won an engineering scholarship to Clarkson University in Potsdam, New York. Following one year as a student, Jerome shifted gears and enlisted in the Army, serving for four years. St. Bonaventure University came next. However, a shade of disillusionment with the church swept over Jerome. With the original intention of becoming a friar, sometime in college, Jon said, “he figured that girls and drinking were a lot better.”

After academia, Jerome would go on to Chicago working at Philips Publishing Company and meet his wife, Joan Marie Hackett. They would go on to have two children, James and Jon. Jerome’s professional career became one of constant flux. Positions would extend from corporate personnel at Fisher-Price to assistant groundskeeper at Chautauqua Institution. But none of that truly distinguished his life. What defined Jerome were his sons.

“He loved his boys,” Joan said. “He adored his boys. And he put them on a pedestal of his life. They were his two fondest and most treasured things, his sons.”

Utilizing his encyclopedic knowledge, Jerome would pamper his children and friends with stories and witticisms. Jon and Joan said he was an engaging conversationalist and man of brevity, patient to contribute something of value.

“It was always different,” Jon said. “You didn’t know what he was going to say. He didn’t use a lot of profanity, but he wasn’t afraid to cross the line. He could spin a good yarn, and often times the story got better with the retelling. But there was a charm about the way he did it.”

Jerome would become a mainstay of the western New York region, moving between Chautauqua and Fredonia. His first season at the Institution, he worked as a groundskeeper. The rehabilitation of Palestine Park was put on his agenda. He would spend a month holding his resentful tongue as he replanted grass, shoveled tons of muck and disposed of decayed leaves and sludge that had clumped and dried over the years.

“It was a long project,” Jon said. “I remember him coming home at night, just cursing that thing. But then very proud of it once it was done. He worked so intimately with it.”

As time passed, Jerome’s physical prowess went its way, weakened by age and disease. Jon recalled the last lucid conversation he had with his father, four days before he died. Jon said his father knew his death was near, and was quite pragmatic about it.

But Jerome decided to ask his son the big question: what happens after death? Jon replied he did not know what to believe. But Jerome had his reservations. He thought it was “all over, lights out.”

“He was very courageous at the end,” Jon said. “I remember him very dignified. There was no fear there. He was certainly ready to go, but I think there was a certain curiosity. He saw that as the big mystery at the end. He asked the question to which he didn’t know the answer, and I think he was ready to find out the ultimate mystery of human life. It was really uplifting for me to see that level of courage and dignity.”

At the Smith Memorial Library, in place of plaques, people who donate or commemorate trees can log a tribute in what’s called the Tree Book. The remembrance written by the Hackett family for Jerome mentions his favorite poem, “The Road Not Taken,” by Robert Frost. The four-stanza poem also happens to be one of the most misinterpreted in American canon. Commonly viewed as a proclamation that aggrandizes independent choice, Frost, referencing both possible paths as equal in wear, intended instead for the poem to be viewed as a personal way to convince oneself that past choices in life, though maybe pertaining no seemingly special value at the time, have made people the assured individuals they are today. The Hackett family were certain Jerome saw the underlying meaning.

“It’s almost the flow of [the poem], that describes his personality and how he lived,” Jon said. “The rhythm of his life was very much the rhythm of that poem. He was that guy who lived a lot in the past. He was always relating through the lens of what had been or what had passed before. That sense of time and continuity. That underlying sadness my dad had, he was introspective his whole life.”

Unless people knew Jerome or the exact location of the tree, the Hackett family were aware that the memorial might not be recognized by everyone. But for them, that was still OK.

“[My father] wouldn’t want people to know that,” Jon said. “It’s a place for people to gather, for kids to play around. He’d derive pleasure from people just coming to sit under the tree.”

For information about making a gift to Chautauqua’s tree endowment and having a tree planted on these grounds in honor or memory of a loved one, please contact Dusty Nelson, director of gift planning, at 716-357-6409 or dnelson@ciweb.org.