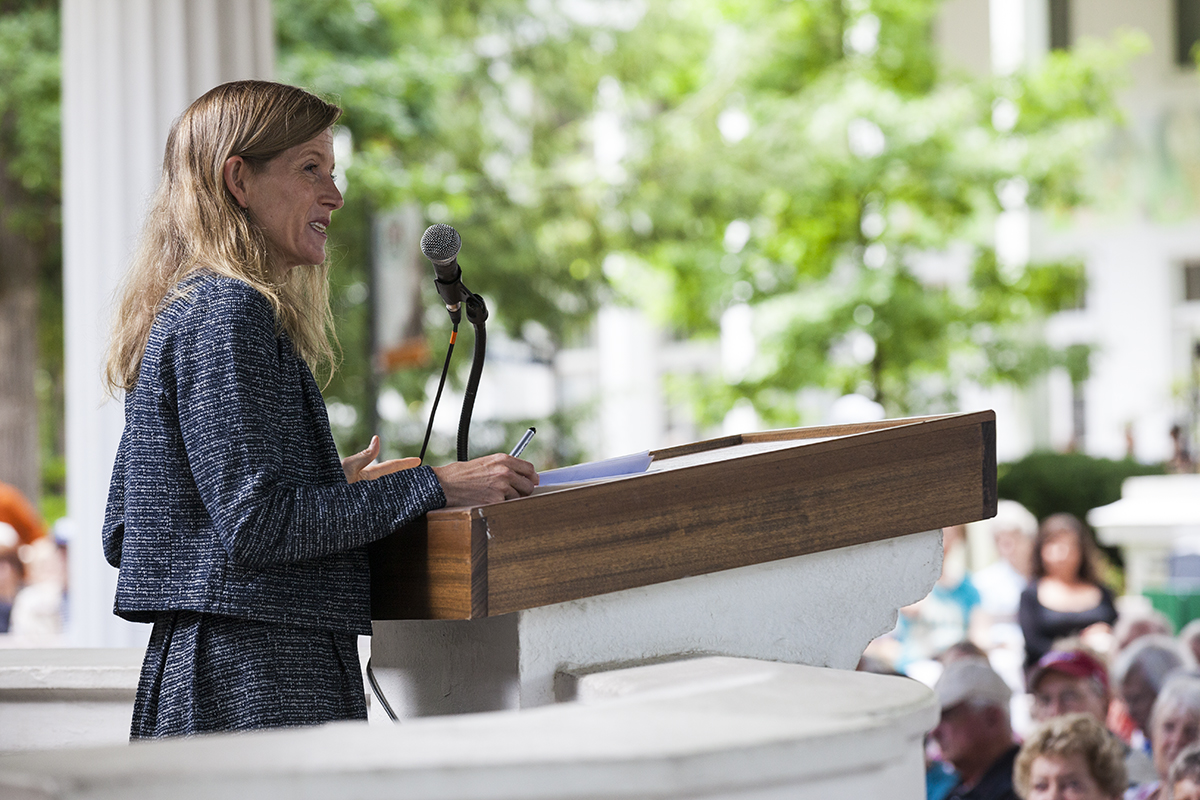 Gore has taken a different approach to carrying the family mantle than her vice presidential father, turning most recently to protests to stem the continued pollution of the natural world. On Monday at the Hall of Philosophy, she spoke about her work as the director of the Center for Earth Ethics at Union Theological Seminary, and called for a new understanding of humanity’s place in the natural world rooted in indigenous theology.

Gore said she never wanted to follow her father’s footsteps. Climate change was too daunting. A lawyer, journalist and political campaign chair, Gore even briefly showed cattle before graduating from Union in 2013 and landing a job there. That’s when things began to change.

“I realized that my own call to conscience at Union stirred by my classes and my professors was closely related to my emerging personal environmental consciousness,” Gore said.

By inviting speakers and planning programs for Union, Gore was at the heart of a growing movement. The world’s most powerful political and religious figures, President Barack Obama and Pope Francis, began to speak against climate change forcefully for the first time. And those within the theological movement, Gore said, began to turn a corner.

“More of us in theological seminary saw climate change as more than a scientific challenge, but as a fundamental moral challenge to the way we live our lives,” Gore said.

Answering U.N. Secretary-General Ban Ki-moon’s call for action on climate change, Gore organized the Religions for the Earth conference, inviting 200 religious leaders ranging from Bahá’í to Buddhist to organize against climate change. Since then, through interfaith dialogue with numerous religions, particularly those from Iroquois, Sioux and Navajo faiths, she said she began to realize that her Abrahamic tradition — the same Abrahamic tradition multiple speakers cited as reasons to protect the planet during Week Four — contributed to the continued depletion of Earth’s natural resources.

The Judeo-Christian tradition prescribes a human-centered morality, Gore said. In Genesis, an anthropomorphic God creates man in his image and gives him dominion over the plants and animals. Post-Renaissance Europeans then twisted that teaching into what Gore called the “doctrine of discovery,” she said, which they used to justify viewing indigenous populations as little more than flora and fauna.

Indigenous traditions, however, don’t draw such clear distinction between humanity and the natural world, Gore said. Otomi elders even have a phrase, “all my relations,” which refers not just to people but to the natural world from humans to rocks.

“It really hit me that it is possible to feel solidarity with other living beings and with the land itself, especially if you’re part of a culture and landscape that’s been devastated by invaders,” Gore said.

Colonization continues today, Gore said, in anything that prevents people from seeing that connection.

Gore called to mind another Native American phrase, “Seventh Generation,” or the Lakota idea that everyone should be responsible for the seventh generation after them. Lakota elders, Gore said, are beginning to fear for the survival and safety of that seventh generation.

That is more or less how the Ivy League-educated daughter of a vice president wound up in a trench in the middle of Boston staging a mock mass grave. Spectra Energy is building a natural gas pipeline there against the wishes of the community, Gore said, and at a time when the U.S. needs to switch to clean energy to meet their commitments in the 2015 Paris Agreement.

The idea of a staging of a mass grave in a trench, Gore said, grew out of an image her friend had seen of a farmer digging a trench of Pakistan for future lethal heat waves. The last one in 2015 reached temperatures of 113 degrees and claimed the lives of about 1,300 people. The farmer wanted to be “prepared” for the next.

Gore said those deaths are indicative of a larger trend in which communities of color and those least prepared to handle climate change are the most afflicted. That is not just true around the globe, Gore said. In the U.S., Gore said, a black kid is four times more likely to die of asthma than a white kid because they live closer to power plants and other polluters.

So what to do about it? Gore called for Western society to reorient its relationship to the Earth from one of plunder to one of co-existence.

Gross domestic product is flawed because it doesn’t measure important things like pollution or depletion of resources, Gore said. Oil spills, for instance, are counted positively in GDP. She recalled her childhood in Carthage, Tennessee, when old men would hang out in a town square. Now big box stores have replaced the family businesses and the old men are gone but the GDP is up and goods are cheaper.

Gore finished with an origin story of the dollar sign. The two pillars had once represented the Pillars of Hercules on the Spanish Coat of Arms, which, with the phrase non plus ultra (“nothing beyond”) symbolized the end of the world at the Rock of Gibraltar. However, after Columbus found America, the inscription changed to plus ultra (“beyond”). Yet as it was minted on Spanish coins mined by slaves, Gore said, those pillars became a symbol for something else entirely.

“In age of conquest and slavery it meant an empire could own everything on the planet, no limit to what could beyond to it,” Gore said. “Is this what we mean? Is this what we mean by the pursuit of happiness? Do we want to think about this symbol again? Maybe recognize that these pillars are grounded in the Earth from which they came and to which we will return.”