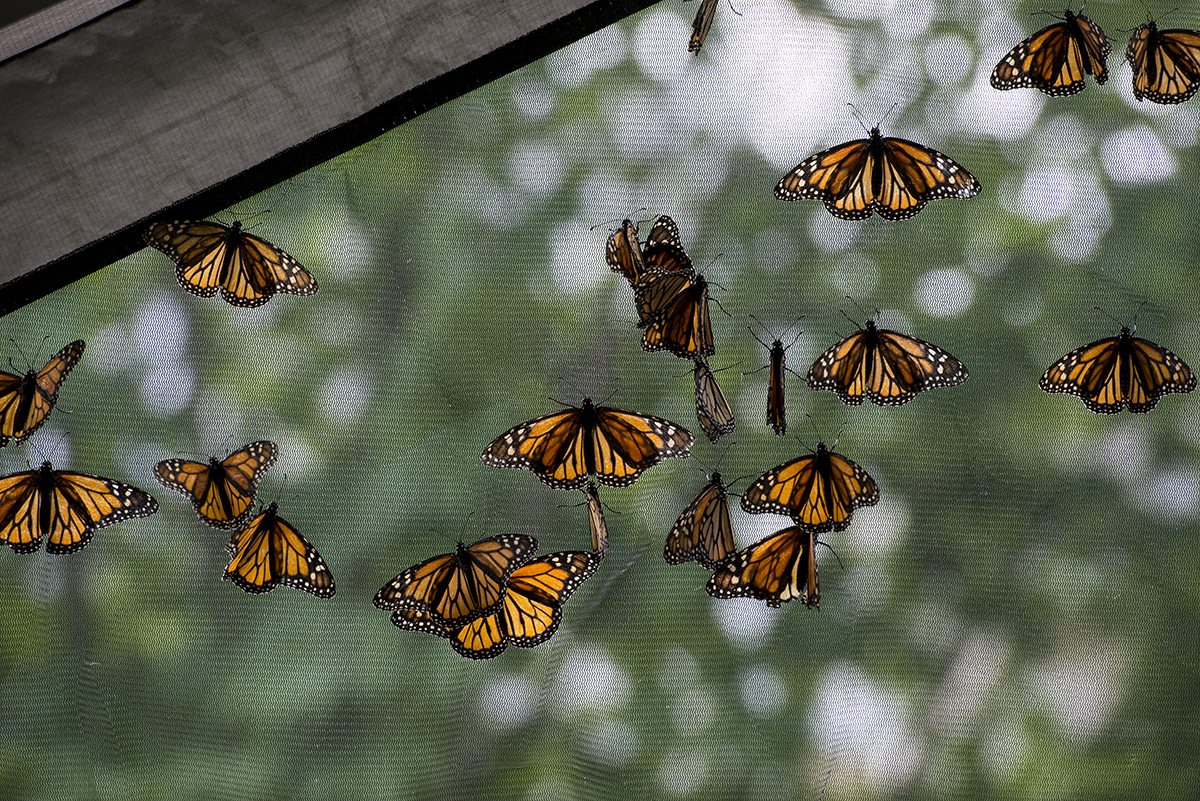 But bees, butterflies and hummingbirds don’t much care if your daylilies are orange or cream; there’s an ethics to gardening, according to Sharon Metcalf, and planting something just because it’s pretty can be selfish.

“Go buy some plastic flowers, but don’t waste your soil on that,” she said.

Metcalf has been coming to Chautauqua for more than two decades where she’s taught pie baking in the Hultquist Center and model rocketry to kids down by the lake. Today, for BTG’s latest “Monarch Moment,” the master gardener will speak at 4:15 p.m. in Smith Wilkes Hall about planting native and supporting pollinators. Her talk is titled “Monarchs, Milkweed and Native Gardening.”

Metcalf said that last bit, supporting wildlife, is the most important. She suggested thinking of gardens like a dinner table — a “Butterfly Bar and Grille” — where pollinators can drop in, drink some nectar, grab some pollen and move on to other plants.

In Chautauqua, that could mean planting milkweed to support the monarch butterfly or attracting birds with purple coneflower. Hummingbirds are fans of wild bergamot, too.

But pollinators are an itinerant bunch, Metcalf said, and as development eliminates naturally occurring sources of pollen and nectar, gardeners need to be intentional about creating way stations amid urban and suburban sprawl.

The monarch butterfly, for example, embarks on an annual cross-continent migration from Canada and the northern United States to central Mexico. Monarchs require milkweed and nectar-producing flowers to sustain themselves along the way. With that in mind, Metcalf said, planting even small pollinator-friendly gardens can help restore lost habitat.

And supporting those pollinators is important: At least 90 percent of wild plants depend on bees alone for pollination, although bees face a population crisis amid various threats. Monarchs have seen a similar decline due to habitat loss and pesticide use.

Instead of common gardening anxieties such as daisies wilting or slugs munching leaves, Metcalf said thinking about those vulnerable pollinators should be what defines gardening success.

“A successful garden is one that can sustain itself — that the flowers feed one another through their flowers, creating a community in your garden that can support the entire ecosystem,” she said.

Planting native and planting intentionally is key, although Metcalf said garden centers don’t always encourage that as an option. Ornamental, hybridized plants with their stunning blooms and “insect resistant” properties are featured more prominently than natives. And when it comes to milkweed, the flowering plant vital to the monarch life cycle, having “weed” in the name may deter buyers.

But Metcalf, whose day job at American University involves communication strategy, has worked with garden centers to rethink how native plants are sold. She described a new wave of consciousness about eco gardening, similar to the backlash surrounding junk food and cigarette smoking, that’s compelled garden centers to rethink strategy. Now it’s not uncommon to see native plants — which are commonly beautiful, Metcalf said — featured prominently at the end of garden center aisles. What’s left is for gardeners to plant more of them.

“Obviously, one individual cannot change the whole trend,” Metcalf said. “But I have watched over the last few years as the consciousness has been raised due to the headlines and the news reports and the gardeners talking to gardeners and people talking to people. It makes everybody aware they can do small things to make a difference if they have any soil and sunlight under their domain.”