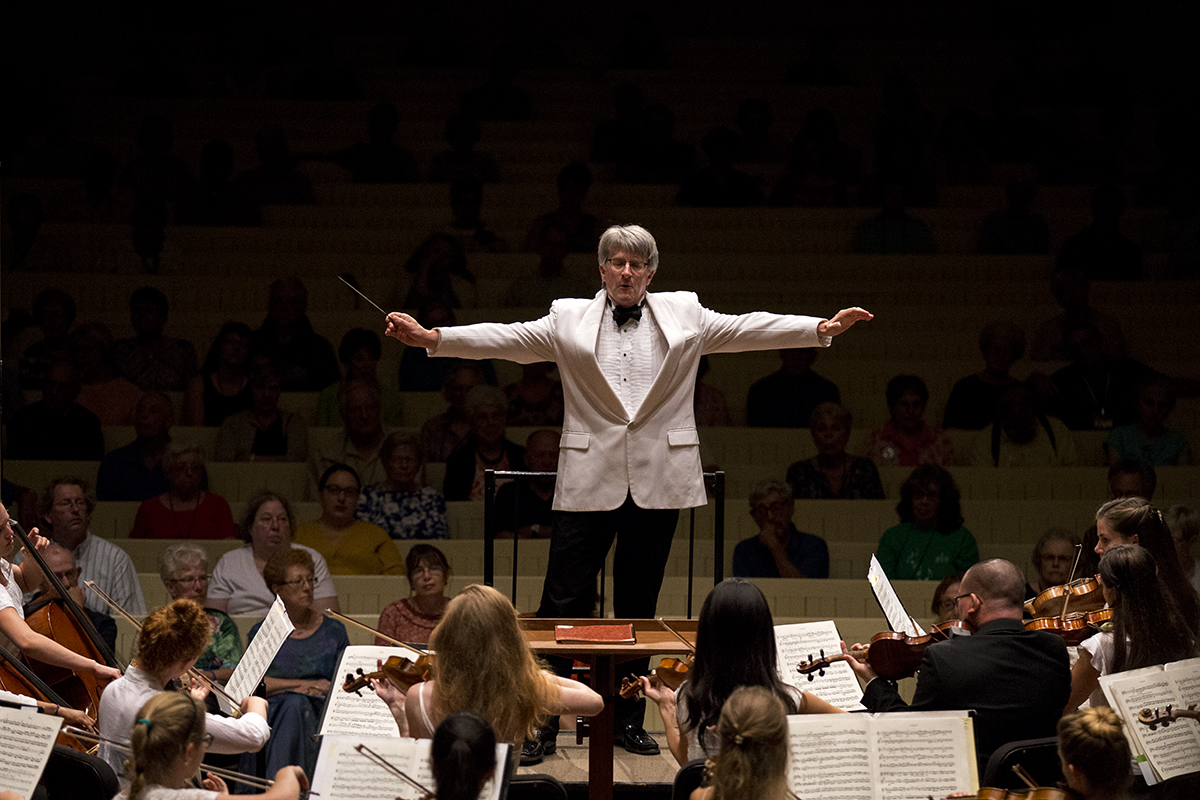 Annie Gosfield’s “Radio Moonbounce and Meteor Scatter” will have an out-of-this-world premiere when the Music School Festival Orchestra performs it for the very first time at 8:15 p.m. Monday in the Amphitheater.

Over the weekend, Gosfield worked with students and Timothy Muffitt, maestro and MSFO music director, to create a unique, nontraditional performance.

A collaboration with the composer and the orchestra was important, Gosfield said, because each musician can interpret her ideas differently. For the composer, that is more satisfying than dictating to them what someone else has done.

“[Gosfield] is a polystylistic composer,” Muffitt said. “And she brings a lot of really diverse elements into her music. This is a piece that is going to have a certain free-form quality to it.”

Gosfield said she gathered a lot of her inspiration for this piece from radio noise, and each musician may perceive that in a different way.

Gosfield, as a composer, has a history of working with radios, broken pianos, warped records and other unique instruments to create new music.

“What’s exciting to me, especially, is that she will be in the rehearsal and working very closely with the orchestra to put this piece together,” Muffitt said. “Largely because of the nature of her music, her involvement in the rehearsal process is going to be quite significant.”

He said extended techniques will be used to play instruments in ways that are unusual.

“I’m excited to get to watch her interact with the players,” he said. “It could mean what we call multiphonics, where the player sings through the instrument while playing it, to create two different pitches at the same time.”

He said other possible techniques could be used to explore notes that are either above or below what is considered to be the range of the instrument. It could even mean a partial disassembly of the instrument, leaving the performer to use just the mouthpiece. One clarinet player will have a different multiphonic sound than another.

“Because the piece [was] not finished, it’s more risky and exciting,” Gosfield said, adding that the score was finished, but the orchestra had to work out the details of every effect.

She said the idea is to come up with something as a group, and the fact that they had such a short time to work on the piece also makes it exciting. Gosfield is also writing a work for the Chautauqua Symphony Orchestra.

“It’s going to be a great opportunity for our players to get to know this composer very well,” Muffitt said.

Gosfield, who has been described by the BBC as a “one-woman Hadron collider,” said working with the players to create unique sounds will create an oral history with new music.

“The objective is always to create something different, new and good,” she said. “It’s so much fun to watch musicians play their instruments.”

Later on in the concert, David Effron Conducting Fellow Louis Lohraseb will lead the orchestra on Benjamin Britten’s “Four Sea Interludes” from the opera Peter Grimes.

Muffitt said the interludes have become a standard repertoire for orchestral performances.

“It’s remarkable music and highly evocative of both atmosphere, spirit and drama,” he said.