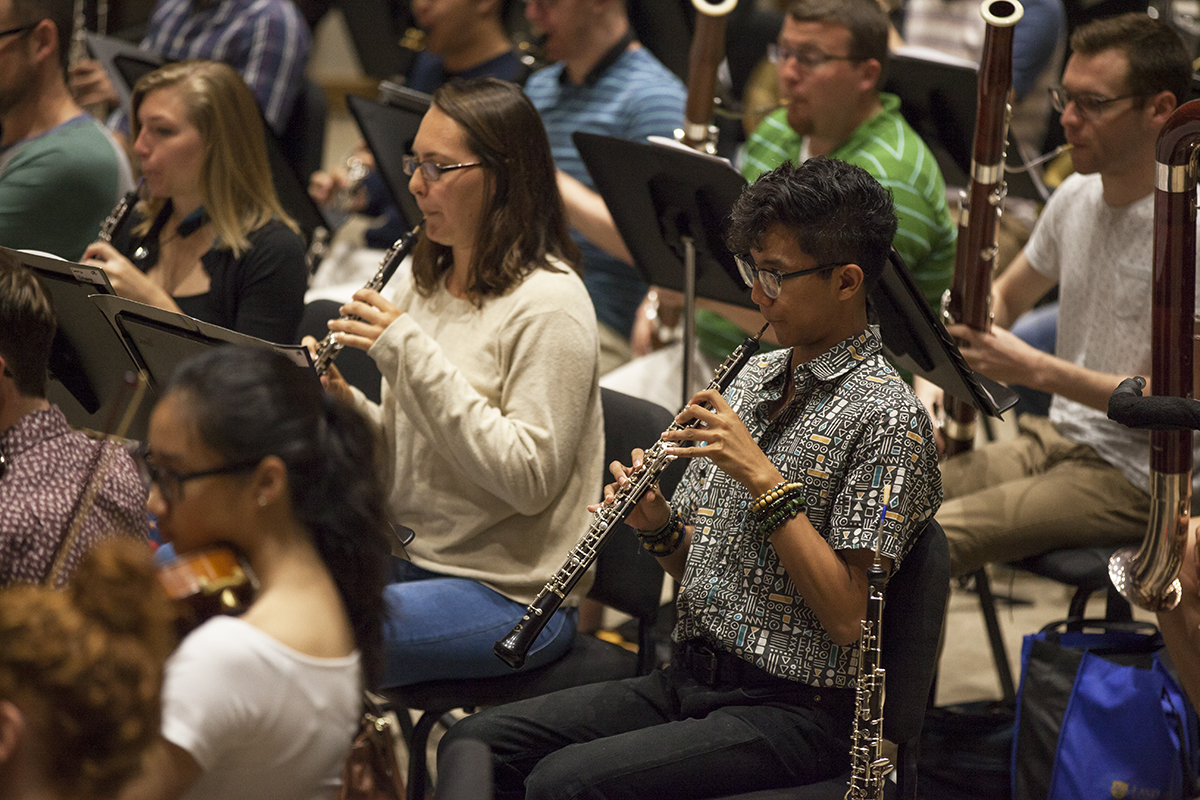 The Music School Festival Orchestra has had seven rehearsals to prepare for its debut at 8:15 p.m. Tuesday in the Amphitheater. Those rehearsals, and the performance, haveone goal, according to Timothy Muffitt: for everyone to get to know each other.

“We try to set the bar really high right out of the gate,” said Muffitt, conductor and music director of the MSFO. “I always try to choose a repertoire for this first program very specifically for the idea of bringing us together as an orchestra.”

This is violinist Rachel Stenzel’s second year with the MSFO, so she has seen that unity in action.

“I think when an orchestra really plays well together, they can anticipate how each person is going to respond,” she said. “So they are thinking ahead rather than reacting.”

She said that can be especially challenging for wind and brass players, because they play as a section. Every player’s style is going to feel a bit different, and everyone has to get comfortable with the way the conductor works.

“Last summer, as the season went on, every concert felt more and more comfortable, and we were able to play more easily,” Stenzel said.

The evening’s performance will include Franz Joseph Haydn’s Symphony No. 92 in G major, Hob. 1/92, “Oxford,” as well as Mark Edwards Wilson’s “The Phoenix” and Mussorgsky and Ravel’s Pictures at an Exhibition.

Because this is a group of more than 70 musicians who have not played together before, Muffitt said, every summer begins with a classical piece for the first concert. He said the Haydn symphony is on the program because music in the classical style is an effective vehicle for developing style, nuance and sensitivity in an orchestra.

“If an orchestra can make that music sound polished and refined, then that gives us the tools to approach other styles with equal levels of refine and polish,” Muffitt said.

Kevin Gupana, who plays the oboe, is excited to play the Haydn symphony because “it’s a great ‘get-to-know-you’ piece.” But it’s “exposed,” Stenzel said, and has to be “perfectly clean.” So, both said, if something does not go perfectly in the classical piece, it shows up right away.

Stenzel said although looking forward to the first concert is not particularly stressful, improvements will be observable in retrospect, at the end of the season.

Gupana is looking forward to his first Amphitheater experience because he said the Chautauqua program comes with a large audience of people who really love the arts.

“It makes me, and I think other players, want to prepare even more for them,” he said.

Stenzel said having a summer intensive in an arts-centered community like Chautauqua is pretty unique. Gupana agreed.

“I think we are encouraged to be more selfless and dedicate more of our work to allowing other people to enjoy it as well as have our own improvement,” he said.

In such an environment, Stenzel said, students “learn to listen to yourself and others better.” That, she said, will always help musicians improve.

Beyond the Haydn piece, the first concert will include a romantic piece by Mussorgsky and a contemporary piece by Wilson, an associate professor at the University of Maryland School of Music. Wilson’s piece will provide a contrast for the audience against the classical and romantic styles of the other two pieces.

“It uses a much larger orchestra, for starters,” Muffitt said, adding that it uses a much more contemporary musical language and provides an opportunity to explore issues of color that are more varied than in a lot of classical music.

“In the first week, there is exponential growth from the first rehearsal to the last,” Muffitt said. “We are already starting to see the orchestra start to really come together. Then for every week of the summer, the progress really continues.”