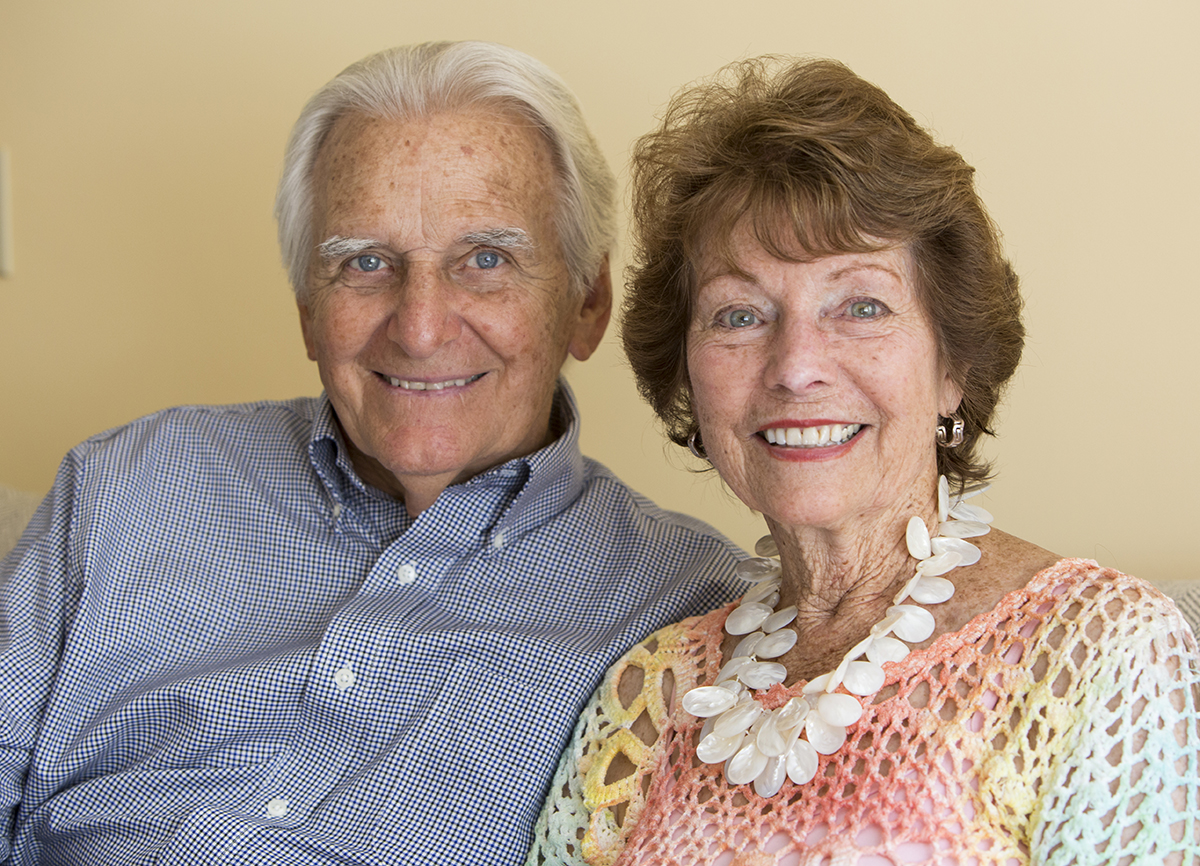 Patsy and Ed Garland were nimble and poised as they nestled next to each other on their couch. Married for almost 12 years, they give off an impression that they’ve been together since high school.

It was the way their voices transferred between one another, with such a delicate tenderness. Theirs is a sprightly love.

This summer marks Patsy’s 25th year attending Chautauqua Institution, and the 14th for Ed. But when they met for the first time 14 years ago, Chautauqua had the potential to become a major deal breaker.

“There were three things, and Chautauqua was one of them,” Ed said. “I had to like it. Second was doubles tennis. I had to be able to play doubles tennis without taking over the court on her. And the third one — which I think was a secret for years after we were married — she had a handwriting expert check my handwriting on a letter I had written to her, to see if we matched. I passed all three.”

Patsy wasn’t hedging her bets, as she had already made her decision on Ed before the handwriting confirmation. She said it was simply another way to know that he was the one.

The Garlands recently made a commitment to the Chautauqua Foundation and became new members of the Eleanor B. Daugherty Society, a decision they pondered over the past couple years. Joining a group of 530 or so individuals, ranging in age from 38 to 100, the Garlands will help in continuing the legacy that is Chautauqua Institution. For them, giving back was a way of showing their gratitude to a “place of serenity,” one that had been there when they needed it most.

“It’s a healing place,” Patsy said. “And when I first started coming here, I was in the midst of a divorce. I just needed to go somewhere and learn something. I felt like a sponge, that I needed to be filled up with thoughts. My friends suggested Chautauqua, and ever since then I’ve been coming full-time, every summer. It was very meaningful to me to come and to share it, and we just want to give a little something back. It’s personal for us.”

One of Patsy’s main attractions to Chautauqua was the idea of learning, how speakers open up thoughts and ideas and creative insights she’d never dreamed of. For Ed, it was a hole-in-one on the 13th hole of the Hill Course at Chautauqua Golf Club.

An aspect of Chautauqua the Garlands have grown fondest of are the unique friends they’ve made and continue to make, especially the ways in which those friendships are maintained.

“We have friends at home in [Tampa Bay],” Patsy said. “And you see them, you call and invite them to dinner or whatever. But here, you might see your friends two or three times a day. I think that is what cements the relationships because you see them often, usually. Coming and going. We consider our friends here as important as our friends in Florida.”

When they’re at the Institution, Patsy teaches yoga courses, a career tallying 30 years. Ed, a retired owner of a retail clothing store for both men and women, finds outlets of enjoyment in golf and tennis. Both attend the morning lectures together. But Ed also joins Patsy for yoga, which has helped in stymieing his past sciatic nerve issues and migraine headaches.

“There was some small writing in the marriage contract,” Ed said. “[It] said every time she taught yoga, I took yoga.”

In a bit of role reversal, Patsy, who had not been so accustomed to golf, joined Ed on the course. Sometimes though, she found she might’ve gotten a little more than she bargained for.

A few summers ago during a golf outing, they were approaching one of the putting greens when a swarm of bees began to tease and harass Patsy. She desperately tried to swat them off, but to no avail. In a last ditch effort, Patsy turned to Ed for help. Seconds later, Patsy watched as Ed’s putter came swinging toward her face.

The bees disappeared. But not without some collateral damage. Patsy agonized in pain as she held her throbbing head.

Her outburst of indignation didn’t last too long.

“She walked right over to the next hole and teed right off,” Ed said.

For information on how you can become a member of the Eleanor B. Daugherty Society, please contact Dusty Nelson, director of gift planning, at 716-357-6409 or dnelson@ciweb.org.