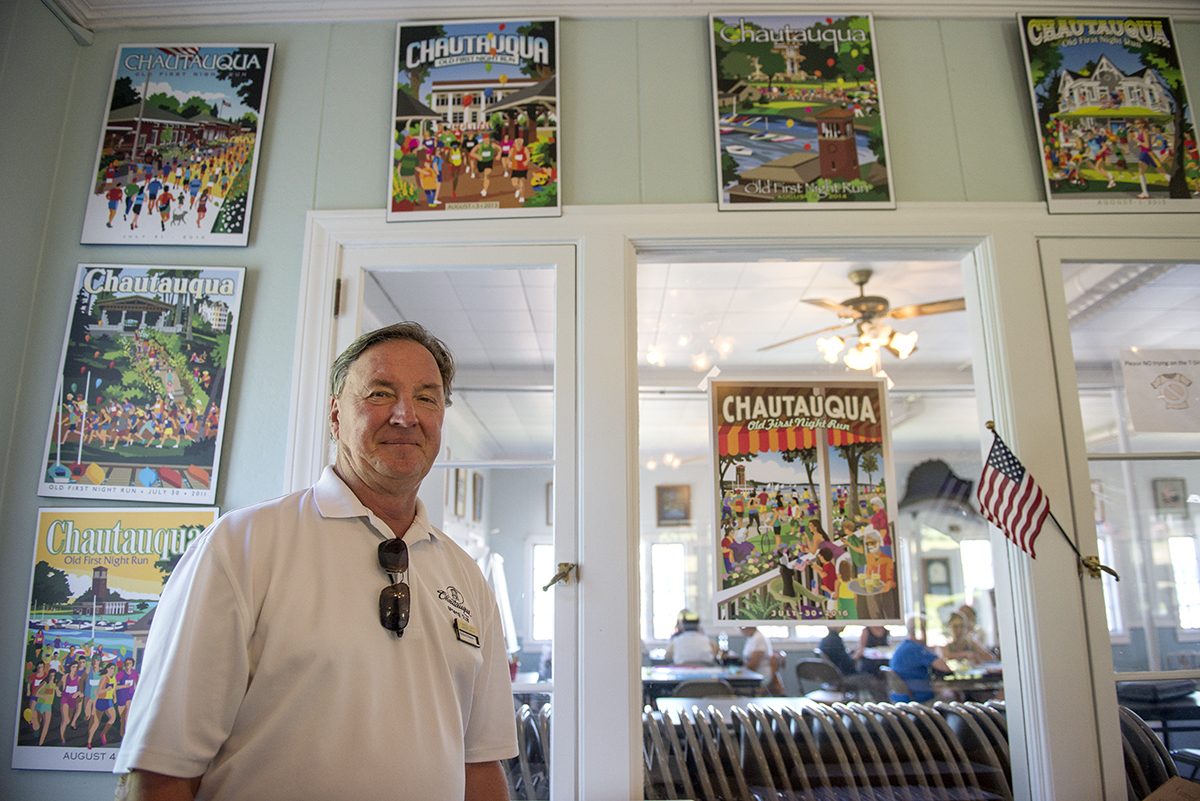 Sometimes, when she’s waiting for a performance to start in the Amphitheater, Peggy Ulasewicz will count the shirts.

“I think the T-shirt has become kind of like a collector’s-type thing,” Ulasewicz said. “People look forward to that every year, but it’s something I don’t necessarily look forward to because I can’t think of new designs. But I take a lot of personal pride in it because I sit down here and I’ll see many shirts everyday.”

When Ulasewicz arrived at Chautauqua in 1989, the annual Old First Night Run was already a tradition, though not the large-scale event it has become today. And the T-shirts presented to each participant reflected that room for growth.

Designs from Old First Night Runs in the 1980s were simple, often just a black shirt with “OFN Run” written across the front. During her first summer at Chautauqua, Ulasewicz said the race only drew about 50 people.

“We upgraded the shirts about five years after I started organizing the race, and I’ve been trying to keep up with that ever since,” she said.

Her initial designs featured the Miller Bell Tower, beginning a tradition that Ulasewicz has maintained throughout the years. Taking advantage of Chautauqua’s scenic beauty, incorporating a well-known landmark into the design became her goal before each Old First Night Run.

After five years of featuring the Bell Tower, Ulasewicz began using the Athenaeum Hotel and Sports Club as the backdrop for her increasingly elaborate designs. Every T-shirt since has featured a pack of runners jogging past a different part of the 2.7-mile course and a recognizable building on the grounds.

The Chautauqua Fire Department made an appearance in 2010, and the Packard Manor and the Colonnade have also been featured in recent years. In an effort to create something new every year, Ulasewicz has expanded her repertoire to include landmarks from all over the grounds.

“When I did the Hall of Philosophy a few years ago, that was the first time I had gone off the Old First Night route. But the real brains behind the creative part is a guy by the name of Dan Wintermantel,” she said. “He’s got a signature style.”

The Pittsburgh-based Wintermantel runs a graphic design studio and has worked on the design for years. His “signature style” helps tie together T-shirt and posters from Old First Night Runs throughout the years.

Ulasewicz said the shirts showcasing Sports Club are some of her favorites, including the design in 2008 that featured her and her husband, Sports Club Director Richard Ulasewicz. In an effort to make each shirt stand out, Ulasewicz said she tries to give each one a distinct color that’s easy to spot.

One of the most memorable T-shirts appeared in 2002, marking the first run after 9/11. Featuring a large American flag waving above the pack of runners, it’s tough to miss the design on the walls of Sports Club, where every Old First Night Run poster from Ulasewicz’s tenure hangs for posterity.

In a few weeks, this year’s design will join them.

The shirts will be neon blue with a view from the porch of the old William Baker hotel, overlooking the Old First Night Run starting line. In the background, the Miller Bell Tower makes yet another appearance.

In true Chautauqua fashion, there’s also a dog, a glass of lemonade and an American flag.

Interested runners can register for the 2016 Old First Night Run/Walk/Swim at http://ciweb.org/oldfirstnight. The Run/Walk portion of the event begins at 8 a.m. Saturday at Sports Club and the swim portion will be held from 7 a.m. to 12 p.m. Friday at the Turner Community Center. T-shirts are available for the first 700 registrants.