Imam Abdulaziz Eddebbarh is an environmentalist who has worked in both the scientific and social aspects of ecological activism. 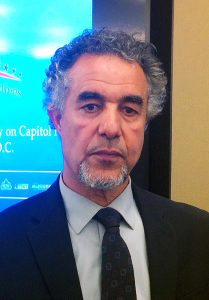 At 2 p.m. Wednesday in the Hall of Philosophy, Eddebbarh will give a lecture titled “Theology of Ecology, a Hope for the Environment: An Islamic Perspective,” during which he will explain his support of environmental activism from a Muslim perspective. Eddebbarh will give examples of ideas from the Quran that he argues support the morality behind ecology.

Eddebbarh grew up in Morocco in an area where he had plenty of access to nature. He said the experience caused him to always search for a harmony between people and the rest of nature.

“To see the harmonious relationship between man and his living environment, that is something that I think has been lost in Morocco since then,” Eddebbarh said.

Eddebbarh received his Ph.D. in environmental sciences from a university in Morocco, and later worked at Los Alamos National Laboratory. His scientific projects there aimed to fix nuclear contamination and waste disposal problems.

Eddebbarh’s faith, Islam, has always been an important part of his life. He said his choice to get into environmental activism was based on a religious and spiritual obligation.

After moving to the U.S. in 1979, Eddebbarh began to work with people of other faiths to raise environmental awareness in religious communities.

His work focused on Judaism because of the historical connections, and current political conflicts, between Judaism and Islam.

“We need to join hands and discharge our duty to nurture the environment and help as human beings, and I think the first step toward that is building relationships with other human beings in the world, and especially other people of faith,” Eddebbarh said. “We should find the common ground to work together, whether it be to improve situations of humans or to care for the environment, Earth and creation.”

Today, Eddebbarh is an environmental activist and leader of Muslim-American support for environmental issues. His lecture today will detail Islamic perspectives on ecology by using principles from the Quran to support environmentalism.

Eddebbarh said he will discuss four main principles from the Quran that outline ethical dimensions for protecting the Earth, including the unity of humanity, guardianship, accountability and responsibility to make Earth comfortable for all creations. He will also argue that the five objectives of Shariah, or Islamic law, actually dictate protecting the environment.

Eddebbarh said the stewardship of the environment is at the hand of the economic and scientific forces that affect it. But he believes that spiritual support for environmental work is important because it helps define human values.

Eddebbarh believes this religious impact on values is not limited to the environment. He said it’s applicable to all aspects of human life and is necessary because humans are losing their moral values as a species.

“Because religion has been absent from being the foundation for these world values, we have let the market dictate what our moral values are,” Eddebbarh said. “The moral choice has been replaced by the market choice — people want things cheap; [they] don’t care if in the process [they] are destroying the environment.”