As a little girl, Sara Seager was fascinated by the moon. She remembers watching the round, silver moon as it followed her father’s car. Wherever she went, it went, and Seager wanted to know more about that mysterious sphere in the sky.

Seager, a professor of planetary science and physics at the Massachusetts Institute of Technology, will continue the discussion on “Our Search For Another Earth” at 10:45 a.m. July 20 in the Amphitheater.

Seager is known for her research on exoplanets and their atmospheres, which led to NASA’s PlanetQuest referring to her as an “astronomical Indiana Jones.”

Seager said she plans to talk about her exploration of space and exoplanets, or planets that orbit a star other than Earth’s sun. She will also discuss the process of finding new planets, the function of different telescopes and what information scientists know about those planets so far. 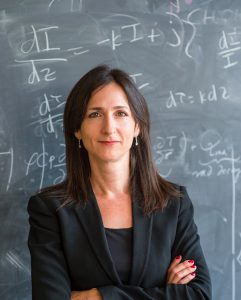 “I know that the best thing is still out there,” Seager said. “The best discovery is the next discovery. Just like if you’ve read a good book, there’s always something better out there.”

Seager said new astronomical findings continue to happen with the advancement of technology. However, the development of telescopes and spacecrafts take decades to design and replicate. For example, the Hubble Space Telescope launched in 1990, though the idea was proposed as early as 1923.

In 2009, the Kepler spacecraft launch resulted in thousands of exoplanet discoveries. The telescope was designed solely for the purpose of finding new planets, which is one of the reasons it’s Seager’s favorite.Through Kepler, astronomers discovered the most common type of planet is not one that exists within our sun’s orbit. The planets’ masses and sizes are in between that of Earth and Jupiter. Though those common planets are smaller than Neptune, they are bigger than Earth.

To reveal more information about known exoplanets, scientists have been constructing an idea for a “starshade” since the release of the Hubble Space Telescope. Seager believes the starshade, which would attach to a telescope, could revolutionize astronomy because the telescope would block out the light of the star and absorb only the light radiating from the planet itself.

“I think it’s our first chance to find a planet like Earth,” Seager said. “The challenge right now is that our technology is limited. We can find information about their orbit or the planet size or the planet mass. We don’t know a lot more.”

The starshade would allow astronomers to study the atmospheres and properties of exoplanets. With current technology, Seager said, scientists can identify if a planet is roughly the same size and mass of Earth but cannot tell the planet’s properties to determine if it is habitable.

For example, if a life-form exists on another planet, scientists would not be able to determine the difference between Venus and Earth through today’s astronomical technology.

That is significant because Venus and Earth are very different, Seager said. Through Kepler, an individual could not see that Venus has a fiery, hot atmosphere while Earth has oceans and forests.

Seager said she cannot say if she believes there are alien lifeforms in other solar system — though she does not dismiss the idea.

“I think [another Earth] is somewhere out there, but it’s probably super far away [enough] that we can’t really identify it yet,” Seager said. “In my mind, there is no concrete evidence that there’s life out there, but that’s what why we’re looking.”