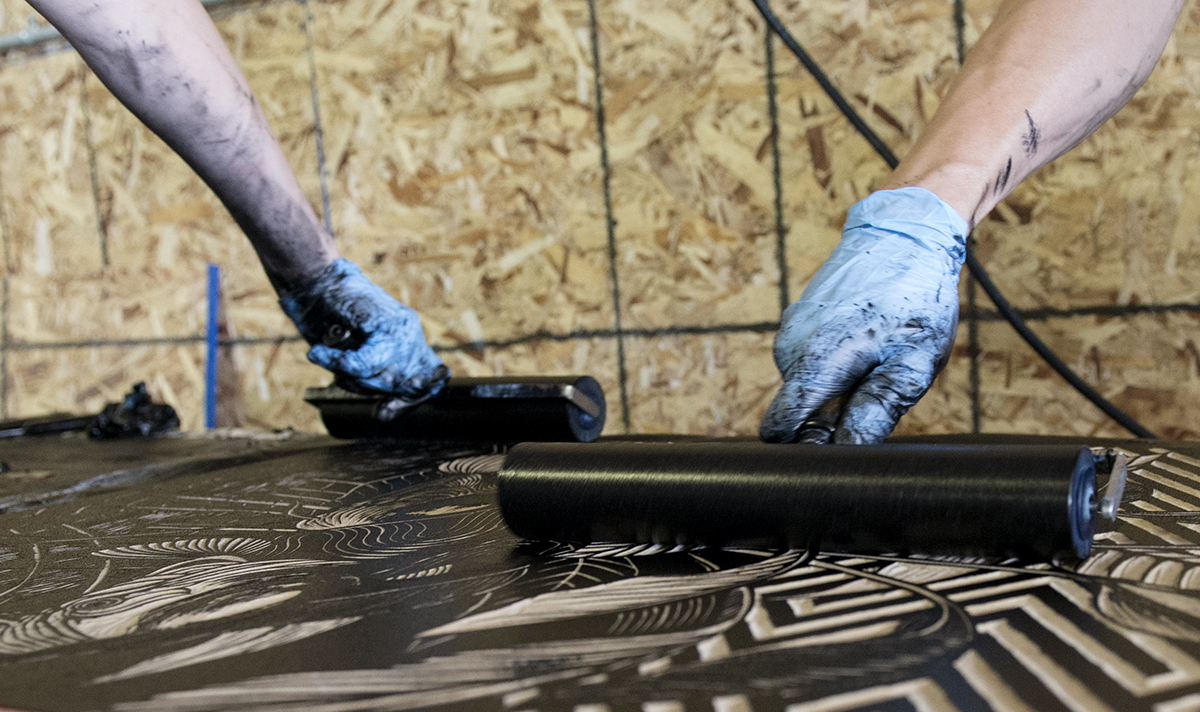 While considering ideas for art events ahead of this year’s fundraiser, VACI Partners President Betsy Vance didn’t know how to top the en plein air event the group did last year. But when VACI’s managing director Lois Jubeck told her that printmaster Tom Raneses wanted to make art with a steamroller, Vance jumped at the chance.

And Sunday night, 13 prints from the Steamroller Print Event on July 17, and another printing session earlier that month, will be auctioned off at the Stroll Through the Arts Gala. Starting at 5:30 p.m. in Fowler-Kellogg Art Center, there will be music, cocktails and appetizers, followed with dinner catered by the Athenaeum Hotel, a live auction and a silent auction at Strohl Art Center. All the money raised will go toward scholarships for School of Art students, said Leslie Renjilian, the chair of the gala.

Also up for auction are gate passes and pottery from Joan Lincoln’s collection, Vance said. Lincoln was a community member who passed away this year and whose family donated certain items from her collection, which includes thousands of pieces in total. Vance said tickets are available at Strohl Art Center, but people can still purchase them at the event.

Another new thing VACI Partners is doing this year is the scholarship paddle raise, Renjilian said.

“Twenty people can raise their paddles and say, ‘I don’t want a print, I don’t want a piece of pottery, what I’d really like to do is just give to the cause,’ ” Vance said.

The group realized that although many people would like to help young artists, fully sponsoring a student for the summer is expensive. Thus, at the auction, attendees will have the chance to pay for smaller expenses such as meals for a student or art supplies.

In 2015, the auction raised more than $10,000, Vance said, and out of the nearly 40 art students this year, about 30 received substantial aid. And for the first time, everyone who needed financial help received it, partly from the money the gala raised. Being able to offer scholarships to people who need it means the School of Art can take in more diverse students, which then makes for more interesting art, Vance said.

Among the different items up for auction, Renjilian said she is most excited about the steamroller prints. After Vance messaged the VACI Partners board about the idea, Renjilian said she was so enthusiastic about the event that she sent several excited, exclamation-point laden emails to Vance, before realizing she hadn’t sent anything with a complete sentence.

Although others were more reluctant about the event at first, Vance said it was important to her to find a creative, arts-based project for the auction.

“People did jump on board and say, ‘Let’s give it a try,’ because we try and look for something that is focused in the arts,” Vance said. “You can have an auction of vacation houses and things, but we wanted something that really connects to what we’re trying to do, and this was a great, exciting connection.”

Last summer, VACI Partners held the en plein air event, where it invited artists from the area to spend one afternoon on the grounds and paint a scene, Vance said. Although she isn’t sure how the group can continue to push the envelope, she said artists are so creative and there are so many new things happening in the art world that an interesting project is bound to come out next year.

“What’s amazing, we didn’t know what we were going to follow the en plein air with and ideas just come out,” Vance said. “In fact, two or three people that are artists on the grounds, established artists and well-known artists here, have already come to me with ideas of things we could try or do … they see things, they bring them forward and you just give it a try … I’m always open to the new and different.”