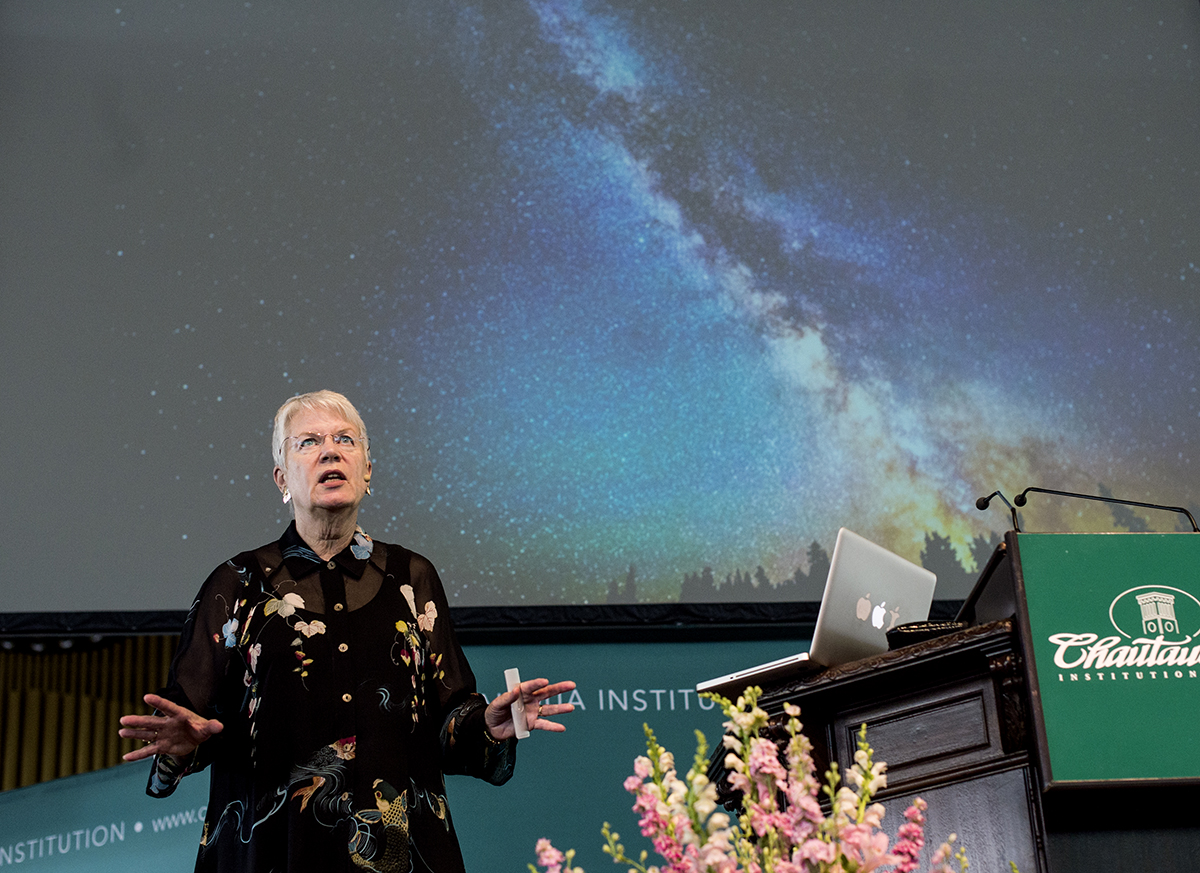 Tarter discussed extraterrestrial life and the quest of scientists to find life on other planets during the Thursday morning lecture in the Amphitheater. Tarter said she is confident the 21st century is the era when other life will be discovered.

“You and I, we’re made of stardust, and amazingly we’re capable of contemplating and studying the stars,” said Tarter, Bernard M. Oliver Chair for SETI Research at the SETI Institute. SETI stands for Search for Extraterrestrial Intelligence. “We’re driven by curiosity, wanting to know what we don’t yet know about who we are and where we are and, of course, who else might be out there.”

Tarter said she considered the finding of extremophiles and exoplanets “game changers” in astronomy.

Exoplanets provide a vast opportunity of places where life could exist. Extremophiles are organisms that can live in conditions humans cannot tolerate, such as in ice or kilometers below the surface of a planet.

“This is a fantastic laboratory for us to understand the process of planet formation,” Tarter said. “It was a good lesson and a reminder that we need to be careful about the unknowing biases that creep into our attempts to predict from what we know to the yet unknown.”

The surface of Mars features miles of rocks and sand with temperatures reaching 80 below zero, a frozen desert. Tarter said scientists discovered a rocky structure they believe was a river delta many years ago.

NASA’s Mars rover Curiosity drilled into the delta rock, uncovering carbonates that suggested the possibility of life once living on the Red Planet.

In September 2015, NASA confirmed the presence of liquid water on Mars today. Tarter said scientists believe water flows intermittently on the surface of the planet after they detected hydrated materials on slopes of dirt. Those slopes contained streaks left behind by flowing water.

Tarter said evidence suggests at one point Mars’ atmosphere was warmer and wetter than the acrid, frozen desert it is today. To Tarter, that evidence reveals life could have existed on Mars in the early development of the solar system.

During the formation of the solar system, rocks and planets played a “ridiculous billboard game,” bouncing off one another, she said. Pieces of Mars can be found on Earth today, especially during spring in Antarctica.

“We know, therefore, that rocks were exchanged between early Earth and early Mars, and Mars may have been the place where life got started,” Tarter said.

Because of those findings, Tarter believes it is logical to ask whether life on Earth originally began on Mars before the change in atmosphere. It is possible life could have been transmitted to Earth on one of Mars’ rocks.

Tarter said statistically, astronomers have found there are more planets in the Milky Way than even the 100 billion stars known to man.

“That’s a different world than I was educated in, and now, because of what we’re learning about extremophiles, it may be that not only is there a lot of real estate out there, but a lot of it may be habitable,” Tarter said.

Current data strongly suggests there is another earth in the universe. Tarter said it is impossible to know what this “Earth 2.0” would look like from a vast distance.

One way to detect life on other planets is through biosignatures and technosignatures. Biosignatures focus on the gases surrounding the exoplanets and what those gases tell scientists about the probability of life.

Technosignatures focus on finding evidence of radio waves produced by technology coming from other planets. There are two types of programs looking for that kind of evidence: radio and optical.

“We are looking for signals that are artifacts,” Tarter said. “Signals that are obviously engineered, the kind of thing we don’t think nature can produce.”

Radio telescopes use different wavelengths to detect if technology on another planet is emitting waves that cannot be detected by the naked eye. Optical telescopes focus light from far distances to create magnified images viewable to the human eye.

Tarter described those telescopes as “windows into the cosmos” that can allow scientists and astronomers to learn more about the universe.

After 50 years, Tarter said she often gets asked why she continues to search for life if none has been found so far.

Tarter said that idea sounds ridiculous, which is exactly how she views her quest for life on other planets: she has only sampled a 12-ounce glass of the vast space in the universe.

“That’s numerically exactly where we are,” Tarter said. “That ocean is there, and we’re really motivated to search it. What’s great is that tools, new tools, are coming along that will allow us to search the ocean more glasses at a time.”

Tarter said out of the vast amount of the universe yet unexplored by humans, the probability of other life is immense. The differences between the Earth and other potential intelligent being out there minimizes the difference between human races as a species.

“I think SETI inevitably holds up a mirror,” Tarter said. “This perspective trivializes the differences among humans that we are able to shed blood over. The detection of an advanced technological civilization somewhere else in the cosmos might be the motivation that we need to get our act together and take care of life on this planet.”