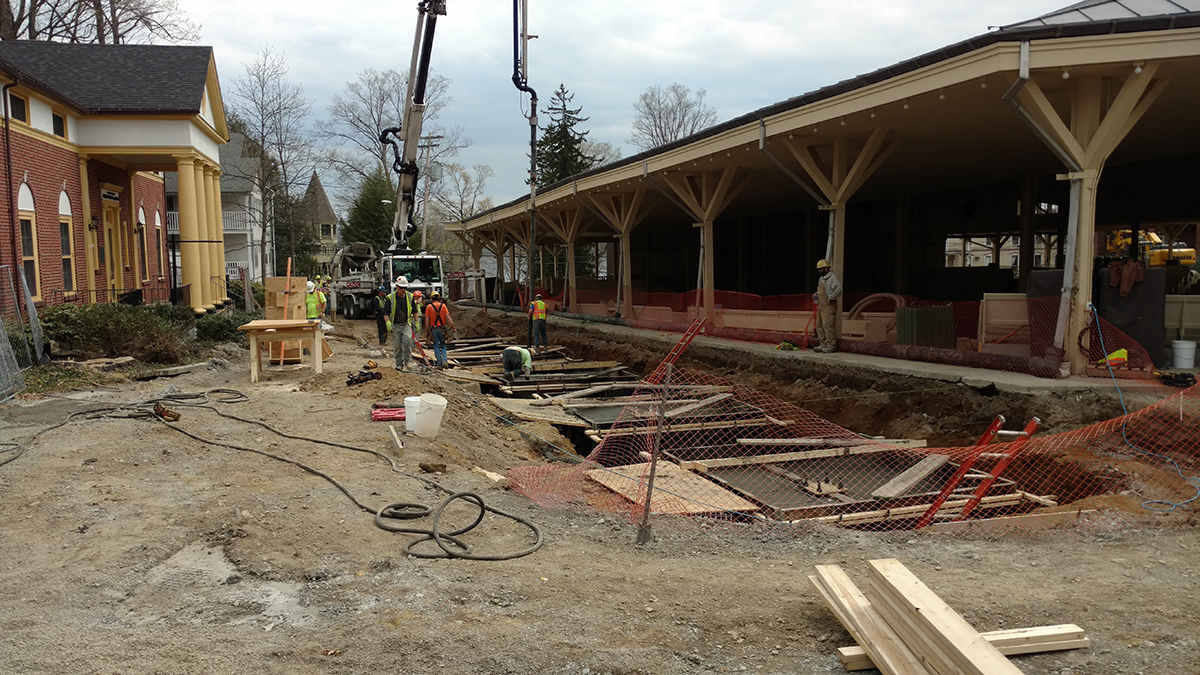 Chautauqua Institution’s Amphitheater has had an eventful off-season, evident in the visible external changes of the facility. Still, inside, the Amp feels quite familiar.

The Amp’s busy off-season began the last Saturday of the 2015 season, capping a summer-long dialogue punctuated by generally civil Friday open meetings. On Aug. 29 Chautauqua Institution’s board of trustees met on a humid afternoon to decide whether to proceed with the largest public works project in Chautauqua’s modern history.

The grounds were abuzz as anticipation built through the day. Many Chautauquans speculated on what seemed to be an unusually long board meeting.

During the summer, the Amp issue had attracted the attention of the regional and even national press. Accordingly, the Institution arranged a press conference to disclose and discuss the Board’s decision in the main entrance foyer of Smith Memorial Library.

Board of Trustees Chairman Jim Pardo, President Tom Becker, Vice President and Chief Marketing Officer George Murphy and Director of Operations and Administrator of Architectural and Land Use Regulations John Shedd all spoke at the press conference. Members of the Cohen Recording Studio staff recorded the session, which was posted too the Institution’s website. A detailed press release including frequently asked questions and answers was distributed.

The Jamestown Post-Journal and WJTN radio sent reporters, and “The CAT,” a local internet news blog was represented, along with the Daily.

Pardo announced that the board of trustees had voted to solicit bids for the Amp renewal project. He said the bid process would determine the actual cost of the project, and that the Board would review matters again at its November meeting with better cost information in hand. He said Institution staff had been instructed to get the necessary permits from the town of Chautauqua.

Pardo and Becker both reflected on the summer’s dialogue, but emphasized their feeling that the Amp project is, as Becker said, “key to Chautauqua’s long-term sustainability.” Both men spoke of the new Amp’s improved safety, accessibility and overall functionality.

“The board of trustees has allowed us to meet our vision,” Becker said.

Shedd responded to several technical questions, and, in response to a query, Pardo said, “a substantial and overwhelming majority of the board supported the current [Amp renewal] design.”

After 40 minutes, the press conference concluded. Outside, on the south end of Bestor Plaza, a big crowd had assembled. Estimates of the crowd ranged up to 500 Chautauquans.

Under a hazy sun at about 3:30 p.m., Becker and Pardo emerged from the library’s main doors and faced the gathering. Visibly moved, Becker thanked his audience.

“We are so grateful for your care of this place,” he said. “Thank you for being so engaged.”

The audience responded with applause. Pardo pledged “frequent and direct communication” with the community as the Amp project proceeded.

Over the off-season, Chautauquans have been able to follow the project’s course. An Amp camera was installed in late spring high on the west side of the Athenaeum Hotel to help the curious monitor events around the back of the house, and Murphy’s Marketing and Communications office has issued numerous bulletins over the winter.

The board of trustees met again in early November to review the Amp project. Afterward, Murphy reported to the community that “as is quite common when considering bids for large projects, these initial bids were higher than expected.”

The board sent back the bids for further review and to seek reductions without compromising the board’s objectives for the project, and to ensure that an achievable timeline was maintained.

“We have asked our construction manager to ensure that an aggressive pre-2016 season site-preparation plan is part of the bid package,” Becker said in a Nov. 12, 2015, letter to the community.

At a special Dec. 30, 2015, meeting, the board accepted a revised $41.5 million construction bid package and associated modalities. The Institution obtained permits for the work a week later from the Town of Chautauqua.

In late January, five Chautauqua residents and the Committee to Preserve the Historic Chautauqua Amphitheater filed suit Jan. 25 in New York State Supreme Court to halt work on the project, arguing the town and the Institution had not fully complied with town and state environmental laws before permits were approved.

In mid-February, New York Supreme Court Justice Frank A. Sedita III, who had issued a temporary restraining order to stop work during his review of the case, dismissed the lawsuit.

Work began during the second half of February and the first days of March. Much of the 1980 back-of-house building was removed, and crews graded and leveled the adjacent land. (Artist Village was installed in late May to replace the most essential functions of the back-of-house.)

As part of the spring work, crews also removed trees from the perimeter of the Amp, relocated utilities, removed permanent perimeter fencing and 1980s bleachers (both have been temporarily replaced for the 2016 season), installed a new stormwater management and diversion system, and removed Peters Bridge for possible relocation and re-use.

More than 140 concrete caissons were installed underground, anchored to bedrock. Those structures will support the perimeter of the new Amphitheater and back of the house. Finally, previously announced alterations to a few roads on the grounds were completed to permit passage by construction vehicles. Vibration monitors were installed along the construction route.

Several senior administration officials have publicly acknowledged that extending the timeline of the massive project to two off-seasons was one of the benefits to Institution planners from the extensive community dialogue last summer.

“The work this spring has greatly lessened the risk posed by our ambitious 2016–17 off-season timeline,” Murphy said. He expressed confidence that the construction team, led by LP Ciminelli of Buffalo, N.Y., will be able to deliver a renewed Amphitheater for a grand opening at the beginning of the 2017 season.

Work will commence again following the close of the 2016 season.

As part of his final sermon of the 2015 season, the Rev.  Robert M. Franklin, Jr. offered some words of perspective.

“Alas, our great Amphitheater will change. … New construction will appear, … but we will not change. … Chautauqua as an ideal is too important,” he said.

Morning Worship Column: ‘We have to learn to love the hell out of other people’