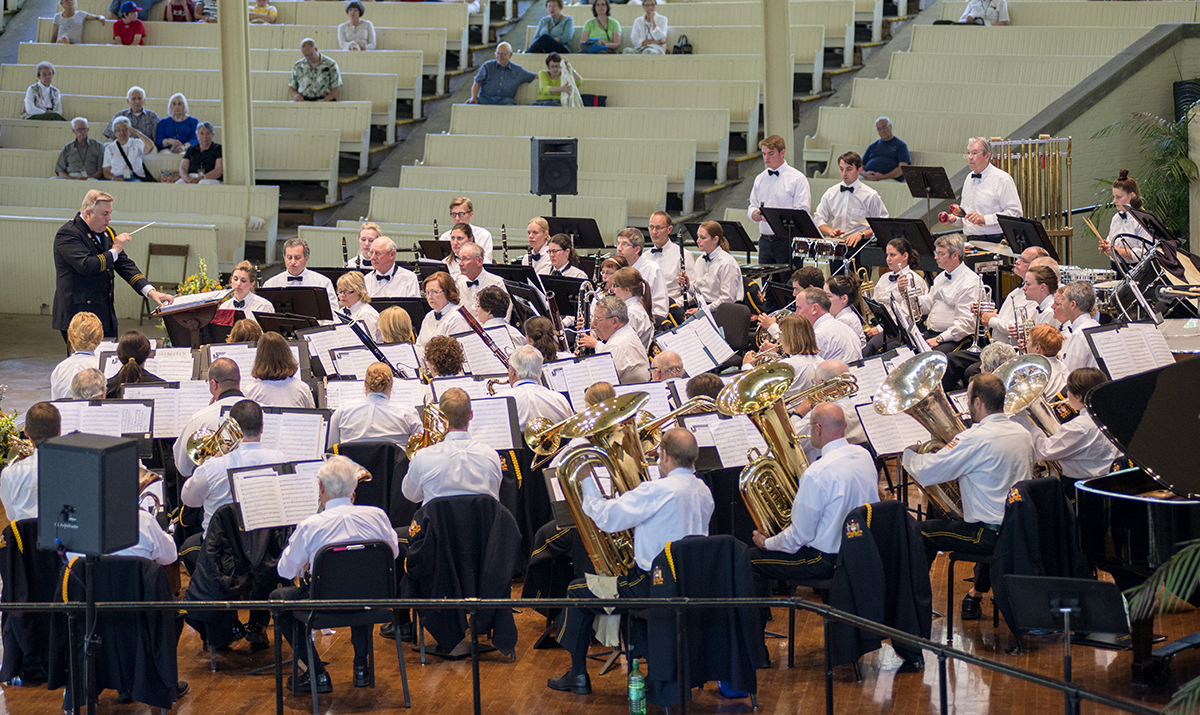 The American Legion Band of the Tonawandas has had many achievements in its 87-year history. Founded by World War I veterans in 1929, the volunteer music group has won 20 national titles and played at Carnegie Hall, the Sydney Opera House and, of course, at Chautauqua Institution, where it will be playing again 2:30 p.m. July 31 in the Amphitheater.

But for band president David Abrahamian, his favorite takeaway from his time in the ensemble might be of a more personal nature.

“My wife is the piccolo player,” he said. “We went to high school together and played in the high school band. [But] we didn’t really associate much in high school and went our separate ways to college and were reunited again through the band.”

Abrahamian said the camaraderie is a part of what he loves most about the band. Similarly, Michael Shaw, the conductor and music director, said because many of the players are also music educators, they will often show support by attending one another’s concerts at their schools.

Shaw said this energy in the 85-piece concert band partly stems from the diversity of members’ backgrounds and experiences. Age-wise, there are high school students, all the way to musicians in their 70s who have been with the band for decades. Abrahamian said he has been part of the band since 1969. And profession-wise, he said, there is also a spectrum that ranges from full-time musicians and music educators, to engineers, nurses and even a postal worker.

Musically, as well, Abrahamian said, there is a diversity in what the band plays. Sunday, it will open with a medley from “Star Wars,” then follow with a George Gershwin-type piece, a tribute to famed bandleader Glenn Miller and excerpts from The Phantom of the Opera, which features a vocalist, among other tunes.

Working through 60 pieces a year, and holding hour-long concerts comprising 11 to 13 pieces each time, the band has quite the variety in its repertoire, Abrahamian said. In general, it will play marches, show tunes and jazz pieces, featuring both instrumental and vocal soloists. When selecting pieces, Shaw said, it can be tough to find material that challenges band members but interesting enough to appeal to audiences, who don’t often want to hear complicated and avant-garde music.

Shaw, who has worked with students and church groups, said the band is both among the biggest groups he’s ever conducted and the most talented. Because so many members have music degrees and take playing seriously, he said he can choose more demanding pieces for the ensemble that he couldn’t for a high-school group.

One of the best things about playing at Chautauqua, Abrahamian said, besides the spacious Amp venue, is an audience that can appreciate challenging music. Having come to Chautauqua nearly continuously since 2006, the band looks forward to performing for people who value musicianship at a high performance level, he said.

Likewise, Shaw said he enjoys playing for people who want to stretch their knowledge of the arts. He also said it is an honor to be a part of the history of the Institution and join the legacy other performers have established here.

Week Six Column From the President