Turney Center Sail to the Future 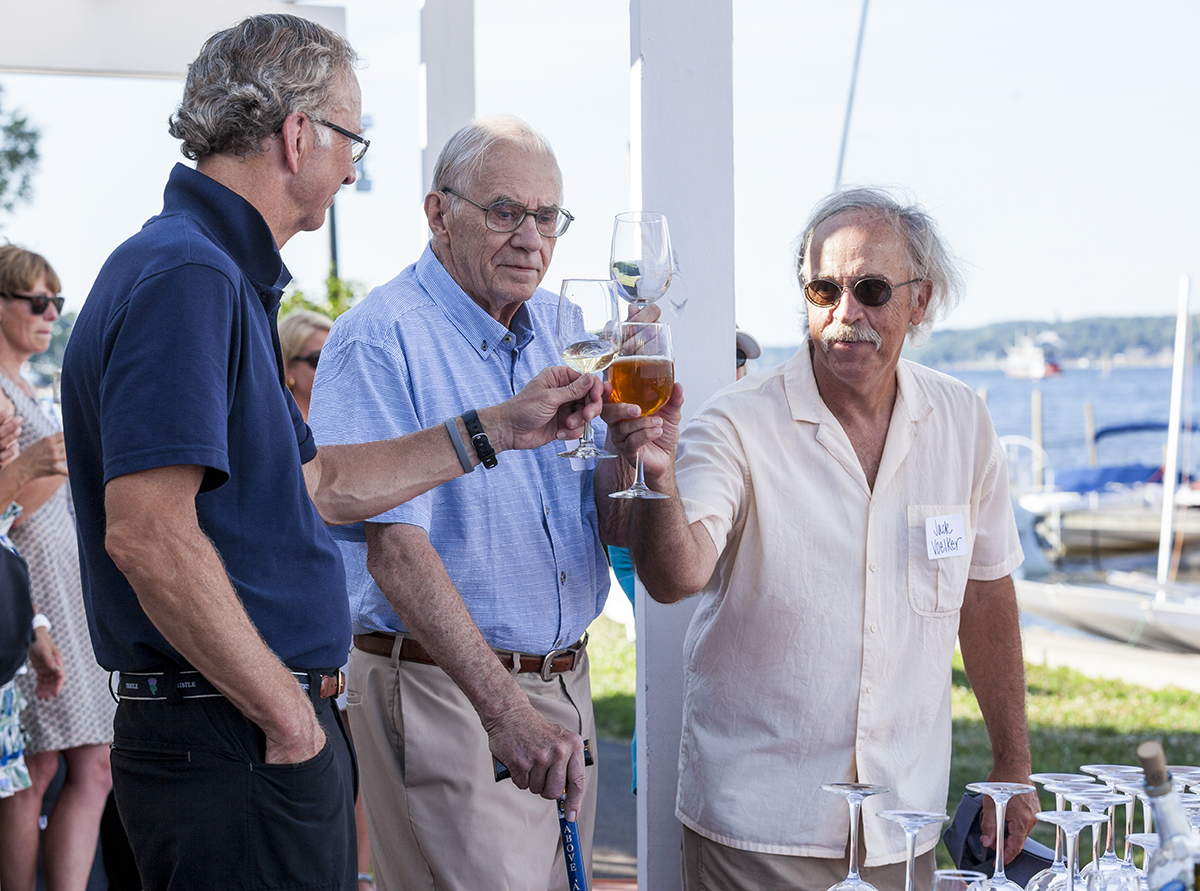 A blazing sun hung with fervor over the John R. Turney Sailing Center as the Turney family and their friends celebrated the facility’s 10th anniversary last Saturday. Due east of the domed pavilion, orange rays bounced between the dimples of Chautauqua Lake. A steady breeze corralled the attendants beneath available shade.

An idyllic day for sailing.

Before John R. Turney passed away from cancer at age 43, he would utilize days like these to take out a boat or spend time with his family. In many cases, it was both. Sailing for the Turneys was a family affair, and it all started with John.

But it also started with frustration. John’s father, Richard “Dick” Turney, shared that early sentiment, too.

Prior to the creation of the sailing center, sailing at Chautauqua Institution had been offered through Sports Club, Boys’ and Girls’ Club, and as a Special Studies course, but so many offerings left it lacking structure and direction.

“I felt that there wasn’t the level of instruction available at that time at Chautauqua,” Turney said. “I know that [my] son, I think, struggled with that a little bit at first because he didn’t have really formal instruction. It was just hit or miss and the mast would break, and there’d be some problems. I felt that we could do something with this wonderful location.”

So in March 1999, shortly after his son’s death, Turney discussed with Chautauqua Institution President Tom Becker the assemblage of a “Sailing Task Force.” Jack Voelker, formerly the director of recreation and youth services, helped in its authorization, along with many others. Conversation soon became a reality, and with the commitment to revamp and revitalize a sustainable sailing program at Chautauqua, a viable platform was determined and set. The sailing center officially opened July 8, 2006.

“The designs of that program are still pretty much in effect, and we think it’s improved over the years in terms of getting more equipment,” Turney said. “The Institution has been very forthcoming in helping provide funding for capital. Our aim is to continue and continually improve the program.”

John Turney’s infectious passion for sailing lives on with his sons, John Benjamin “J.B.” Turney and Fredrick “Ned” Turney. J.B. would go on to become an all-American collegiate sailor at Georgetown University. Ned took his talents to the Hobart and William Smith Colleges sailing team.

“My dad sailed here on Chautauqua Lake with his sisters for many years,” J.B. said. “He introduced the sport to my brother and myself and then spent a number of years kind of teaching us how to sail, getting us involved with different sailing programs. He thought it was a great way to spend time with family. Great way to enjoy life.”

As a racer at Georgetown, J.B. was exposed to sailing venues across the country. But growing up, he saw Chautauqua Lake as a unique and wonderful location to sail, one he thought may have been underutilized.

“For the Institution, right on the shores of the lake, to introduce the sailing center, it was just a great thing to bring more people through a formal program of instruction and take advantage of what’s here,” he said.

One of the individuals who spoke at the celebration was Geof Follansbee, CEO of the Chautauqua Foundation and vice president of Chautauqua Institution. Remembering a man and friend who had contributed much to the Institution, Follansbee began by steering toward the lighthearted. Recognizable for wearing his trademark bow-ties, Follansbee joked about his outfit and how John was one who had approved of his “goofy” clothing preferences.

Follansbee also reflected more somberly, reminiscing on the many happenings at the Mayville bar scene with John.

“If John was there, you knew you were going to have a fascinating and interesting conversation,” Follansbee said. “He was just damn fun to be with.”

But John was also capable of touching those he hadn’t met. Meg Pickard, director of recreation, was diagnosed with cancer in her late 20s. She said even though she’d never formally met John, she felt a “unique kinship” with him.

“The result is a very deep desire inside of me to see this facility and Chautauqua’s sailing program reach its full potential, and in so doing honor a man with whom I share the tether of understanding that bonds all cancer victims,” she said.

Also speaking was Becker, who was quick to acknowledge Dick Turney’s “tenacity” with the sailing center. He observed how what was once pain and loss had now turned to great pleasure, largely due to Dick’s execution, demand for quality and “labor of love, with an underlining on labor.”

Becker also emphasized the practical and invaluable applications that could be extracted from recreational activity, specifically sailing.

“There are lessons learned from an early age to adult in coping with wind and current, in contesting other boats,” Becker said. “There’s character. Critical thinking. There’s a bond in all that. There’s art in all of this.”

For the past few years, an element of the sailing program that Dick Turney, along with an informal group notoriously called Friends of Sailing, encouraged was the hiring of Level 1 sailing instructors.

To earn a ranking of Level 1, participants must successfully complete a four-day, 40-hour course. Turney was pleased to announce that this year, the Institution has hired a total of 11 Level 1 instructors.

“I’m very proud of that, [of] working together with the Institution and hiring qualified people because in our view, it’s probably the riskiest activity Chautauqua’s engaged in,” he said. “On the water, you got to be careful. Our predominant theme the last three years has been safety. We want safe boats. We want the right equipment. We want qualified instructors.”

Initially, when Turney and the task force set out the remodel the program, the underlying goal was to have young people learn how to sail properly.

Today, programs are available teach children, teenagers and adults. And with Club just around the corner, Turney confidently estimates that hundreds upon thousands of people, senior and junior, old and new, have all sailed at the center in the last 10 years.

“Anybody who wants to learn to sail should learn to sail,” he said. “We’re moving this thing ahead. We’re not going to sit still. We’re going to make it better.”

Week Six Column From the President