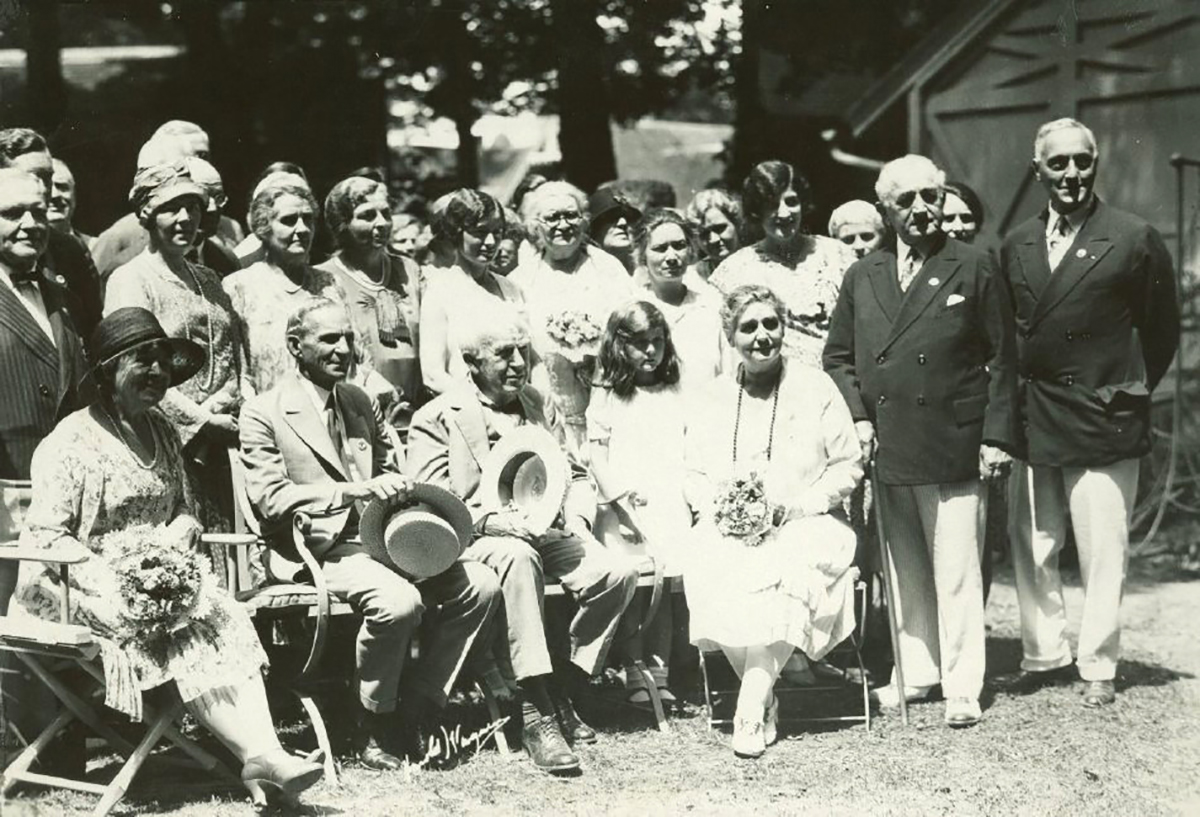 The Miller Cottage, one of Chautauqua Institution’s earliest and most historic structures, has hosted the famous and powerful since it was built in 1875 as the home of Lewis Miller, Chautauqua’s co-founder.

President Ulysses S. Grant was an early visitor in August 1875. Rutherford B. Hayes was a guest after his presidency. Thomas Edison spent summers there with his wife Mina, Miller’s daughter, and they entertained numerous dignitaries. One of the most unlikely gatherings at the house on Whitfield and Vincent occurred on July 24, 1929, the 100th anniversary of Miller’s birth.

In the exquisitely manicured garden that summer day, three of the most celebrated men in America came together to honor Miller. They were Edison, the country’s foremost inventor; Henry Ford, the nation’s leading industrialist; and Adolph Ochs, the publisher of The New York Times.

Ford was a close friend of Edison’s and a frequent guest. At the time, he was perhaps the richest man in the world. He had revolutionized manufacturing with the production of his automobiles. He was also known as one of the most virulent anti-Semites in America.

Ochs was arguably the most prominent Jew in the United States. Starting as an office boy at a newspaper in Tennessee, Ochs had built The New York Times into the nation’s most powerful and respected newspaper. For years, he had quietly, but relentlessly, fought anti-Semitism through the press.

Ford had also made a foray into the newspaper business. In 1919, he bought a small newspaper in Dearborn, Michigan, the headquarters of his car company. He used The Dearborn Independent to raise his profile nationally and as a megaphone for his own ideas. In a little more than a year, Ford embarked on what he considered “an educational campaign” by publishing a series of 92 anti-Semitic screeds with the theme “The International Jew: The World’s Problem.” Among the articles were reprints of “The Protocols of the Elders of Zion,” a concoction of the Russian secret police in the 1890s that purported to expose a Jewish plot for world domination. The circulation of his paper reached 700,000. The articles were compiled in book form and translated and sold throughout the world. The book was particularly popular in Germany.

Ochs, like many successful Jews of his time, tried not to make an issue of his faith, according to Susan E. Tifft and Alex S. Jones, the authors of The Trust, a book about the owners of the Times. The newspaper studiously avoided the perception of Jewish influence, they wrote. It came late to coverage of the Dreyfus affair in France and opposed the appointment of Louis Brandeis to the Supreme Court.

But in 1915, the paper vehemently protested the conviction and subsequent lynching of Leo Frank, a Jewish businessman, in Atlanta for the murder of a 13-year-old girl. Ochs was horrified by the flood of anti-Semitic letters that poured into the Times. Behind the scenes, he began a long campaign of writing to individual newspaper editors around the country to strongly oppose anti-Semitic coverage.

By the mid-1920s, Ford’s anti-Semitism was becoming a liability to him. There were boycotts of his cars and lawsuits were piling up against him and his publications. One such suit was filed for $1 million by Aaron Sapiro, a businessman whom Ford had accused of being part of an international Jewish cabal.

Through emissaries, Ford reached out to Louis Marshall, the president of the American Jewish Committee, to discuss how Ford might extricate himself from the bad publicity that was accruing around him. After an exchange of drafts, Ford issued a public apology that was carried in newspapers nationwide on July 1, 1927.

In his apology, Ford said he had been too busy to realize what was being published under his name and would not have allowed it if he had known.

“I deem it to be my duty as an honorable man to make amends for the wrong done to the Jews as fellow-men and brothers, by asking their forgiveness for the harm that I have unintentionally committed, by retracting so far as lies within my power the offensive charges laid at their door by these publications, and by giving them the unqualified assurance that henceforth they may look to me for friendship and good will,” Ford wrote.

Days later, Marshall responded with a letter that was likewise published nationwide.

“The statement which you have sent me gives us assurance of your retraction of the offensive charges, of your proposed change of policies of The Dearborn Independent, of your future friendship and good will, of your desire to make amends, and what is to be expected from any man of honor,” Marshall wrote. “You couple these assurances with a request for pardon. So far as my influence can further that end, it will be exerted, simply because there flows in my veins the blood of ancestors who were inured to suffering and nevertheless remained steadfast in their trust in God.”

In an interview with the Jewish Telegraphic Agency on July 17, 1927, Ochs supported Marshall.

“Louis Marshall’s reply to Mr. Ford was a classic, and should be read from every Jewish pulpit in America,” he said. “To forgive is human, but to forget is divine. The damage that The Dearborn Independent and its auxiliary publications have done can never be repaired; and like the ‘wise men of Zion,’ will make periodical, malicious appearance for many years to come. Nevertheless, Mr. Ford has shown superb moral courage in his wholehearted recantation, and has gained the respect and admiration of his fellow men.”

Ford closed The Dearborn Independent. He also refrained from making any anti-Semitic public statements for the rest of his life.

Two years later, Ochs and Ford were chatting with Edison and Arthur Bestor, the president of Chautauqua Institution. The four of them can be seen in a newsreel from the time, a copy of which is on file in the Oliver Archives at the Institution.

“It’s a great treat to be here with you at Chautauqua,” Ochs says to Edison in the newsreel. Edison, profoundly deaf, turns to Ford and asks what Ochs has said, and Ford tells him. Everyone smiles.

In 1938, Ford received the Grand Cross of the German Eagle from Nazi Germany, the Hitler regime’s highest civilian honor, ostensibly for his contributions to industry. The award reopened the old wounds of past statements and enraged many Americans.

When Ford’s grandson, Henry Ford II, took control of the Ford Motor Company in 1945, he began a lifelong campaign to support both the American Jewish community and the newly formed state of Israel, in part as a way to make amends for his grandfather’s legacy.