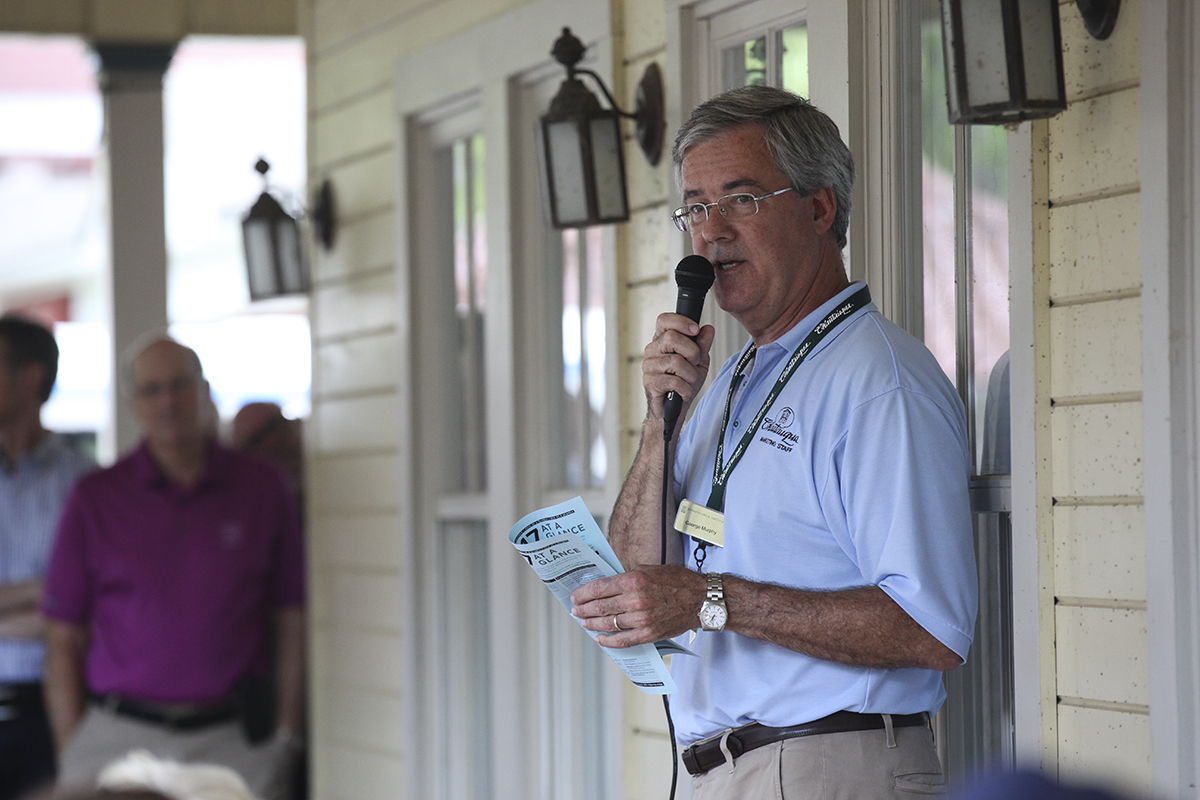 How can the Institution attract more people and keep them coming back? That’s the eternal question that’s always on the minds of Chautauqua’s staff.

George Murphy, vice president and chief marketing officer, spoke about his department and its work during the Trustee Porch Discussion Friday at the Hultquist Center.

Murphy was introduced by James Klingensmith, board member and chair of the board’s Marketing and Communications Committee. That committee is in its inaugural year and includes six board members.

Beginning with a flurry of statistics, Murphy ran through the demographics of the Chautauqua experience, focusing on how the marketing plays a role in bringing people to the grounds.

There are four groups of the 100,000-some attendees at Chautauqua: long-term visitors (one overnight to entire season), Sunday attendees, Friday-night entertainment attendees and attendees who come for any part of the day outside of the categories. Within those, 40 percent don’t return the next year. Two-thirds of the Chautauquans who attend are 67 years of age and older.

“When they invite their friends — and they are our best advocates for inviting people here — unfortunately it’s a ‘bucket list’ [item] for them,” Murphy said. “They come, they visit you. They’ve got their lifestyle outside of Chautauqua with their kids, with their community, … so they have a wonderful time coming here, but they don’t come back so they don’t add to the base.”

Murphy said the Institution is looking to grow that base. When deciding who to target within its marketing, he said there are four main groups, all presenting different challenges:

• Active elders: 66 years of age and up, financially stable, well-educated and come for the programming. They don’t typically add to the base of attendees and can be attracted through word of mouth.

• Educated middle: College-educated, from secondary cities and strong family and religious values. Their middle income is somewhat constrained and affordability is large concern.

• Young families: With kids who are infants to teenagers. Fewer families are coming and when they do, they come for less time. There is pressure of work and children’s activities. Some word-of-mouth marketing for Chautauqua had previously come through the kids telling friends about their experiences here.

• Emerging empty nesters: Either the youngest baby boomers or oldest Gen Y. Their kids are older and they’re looking to buy a second home or are looking for new experiences. The challenge is they are largely segmented.

Different ways people learn about and come back to Chautauqua include word-of-mouth testimony, titles of weeks, description and the content with experts in their field, Murphy said.

Accommodations play a large role in the experience for Chautauquans, Murphy said. Annually about $500,000 is put into the Athenaeum Hotel for improvements; about 5,500 people stay at the hotel each season.

“If you want to come here for less than a week, there aren’t that many options,” Murphy said. “If you’re trying Chautauqua for the first time, the entry door for you to this place is the Athenaeum Hotel.”

Other options for accommodations at lower rates include denominational houses and Bellinger Hall during Weeks Eight and Nine, Murphy said.

Other factors to help marketing and retention include improving dining, now having a Visitors Center and training employees with consistency.

Murphy’s discussion was about a half-hour, with the rest filled with questions and comments from the crowd. Most asked why certain groups weren’t being targeted and how Chautauquans can help spread the word.

Chautauquan Jack Coonahan said the conservative viewpoint is being left out of programming, or when it is included, it’s dismissed.

“There’s always an intent in every week to have opposing points of view,” Murphy said. “I think there have been some rude crowds actually with some of the conservative members that we’ve had [at the 2 p.m. lectures] which is something we’re trying to figure out ourselves. This ‘civil Chautauquan … behavior’ isn’t so civil when you have someone with a really opposing point of view.”

Murphy said the production value of Chautauqua’s recordings is not up to the same standard as other media outlets, and working with other outlets can get expensive.

“We have not been as aggressive in taking non-nine week content and creating more content outside the season and then figuring out how to get that online digitally,” Murphy said. “I think there’s a lot more we can do and we’re looking at different production executions in the new Amphitheater. We’ll have more capability from a filming point of view.”