At Strohl, a ‘Restrained Adventure’ in Teapot Form 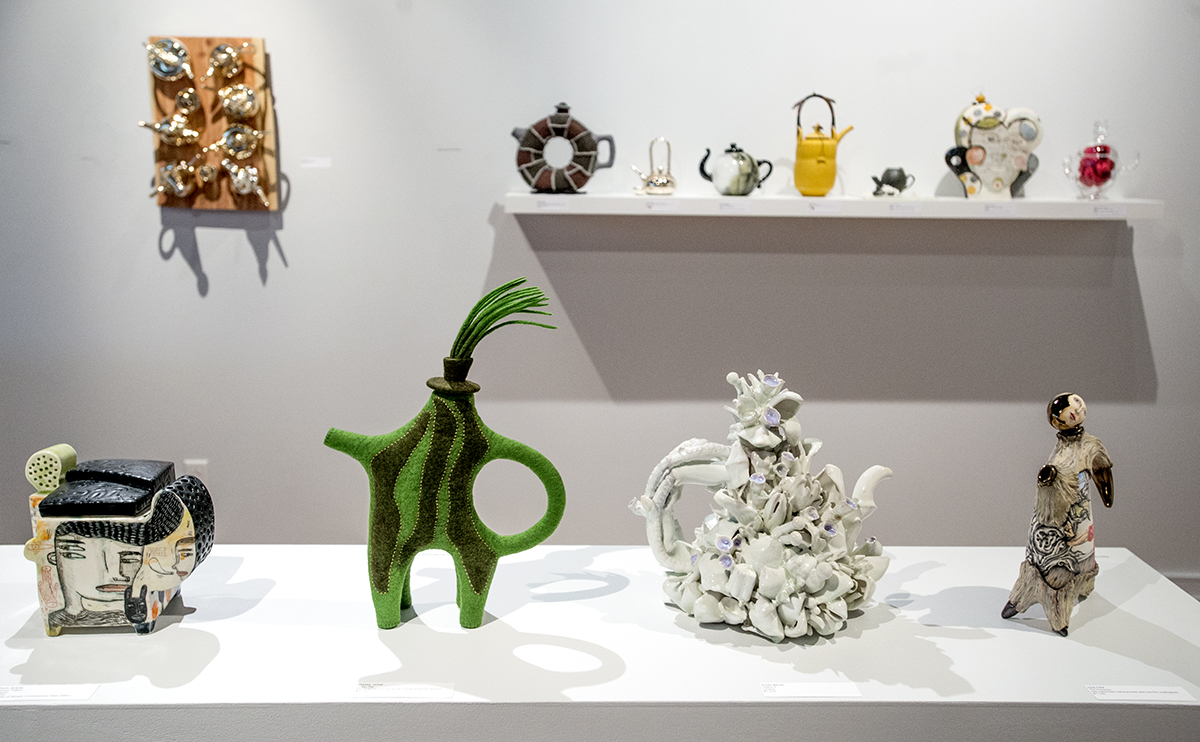 Strohl Art Center again takes its visitors by surprise with a crazy-wild and, yes, even elegant, small-but-commanding showcase of … teapots.

The teapot is a venerable instrument in cultural history, one with a hand in international chauvinism and mercantile opportunism all along the tea trail from China to England — and then onto radical surrealism with Pablo Picasso’s coffee klatch — to call out just a few of tea’s thousand-year-old aspects.

Brought to mind, too, are the colorful Chinese pots, the ceremonial grace of the Japanese, the class signifiers of the Victorian-era white porcelain pots.

And who since Andre Breton’s first exhibition of surrealist sculpture does not recognize the yearning of Meret Oppenheim’s “Breakfast in Fur” trio of symbol-laden, fur-covered cup, saucer and spoon?

Where, we wonder, is the furry teapot? It somehow was left out of the conversation in a coffee house, legend has it, among Oppenheim, Picasso and Dora Maar, the artist who was Picasso’s lover du jour.

One can only hope the absent furry pot appears someday, though it is not here.

Instead is my favorite, an encrusted cluster of coral creatures of all sea shapes and color, vividly asserting a pot, spout, bowl and lid. Doubtful is its ability to hold steeped water. It is by Susan Beiner of Arizona State University, who has had some play in major showcases, such as the Mint Museum and the Los Angeles County Museum of Art.

Hers is on the wild-crazy side.

The exhibition boasts 38 objects, some with multiple pots for variational enjoyment, and some are by artists represented several times. The show is another foray into the unpredictable, led by Judy Barie, the Susan and Jack Turben Director of VACI Galleries.

Barie’s selection also includes more subdued work, with a black porcelain bowl with a Spanish cedar handle and knob, an example of fine design elegance by Brian Ferrell from Greensburg, Pennsylvania. As well, on the elegantly conceptual ledger is Sean Donlon, who created an installation of glass pots, with slight variations, in the Japanese secular manner, with two tiny cups, all wall-mounted on board.

Now, here is a sample of the works in extremis, which dominate:

Julia Feld of Gilroy, California, whose hand-printed narrative imagery laid upon the pot bowl, is accented by strange shape and a doll-faced knob, along with antler handle.

Lisa Demagall of Cleveland, whose negative space pots can’t hold even air, do offer a glass form, in one case of a chandelier — and who would have guessed their shapes are related. Another of her pieces is shaped in glass to represent a fence and vine and blackbird sculpted into a non-functional teapot.

Ahrong Kim from Rhode Island School of Design makes a pot and calls it “My Warm-Hearted Stove.”

So, dear audience, come skeptically to the gallery and return dazzled. It will be not so much of a discovery, truly, as it will be a restrained adventure, and one might recall the long history of aesthetic concerns revisited through 20th-century museum-quality design — with such as the Bauhaus’ signature work of Marianne Brandt; the surrealism of Salvador Dalí; the modernism of Russel Wright and the postmodernism of the architect Michael Graves.

It is a small room, for small pots, and worth a visit. The show’s title, an ancient proverb, they say, is “The Path to Heaven Passes through a Teapot” — and upon pavement of good intentions.

Anthony Bannon is the director of the Burchfield Penney Art Center at SUNY Buffalo State. He was the art critic for The Buffalo News, and writer for the former American Ceramics magazine, among others.