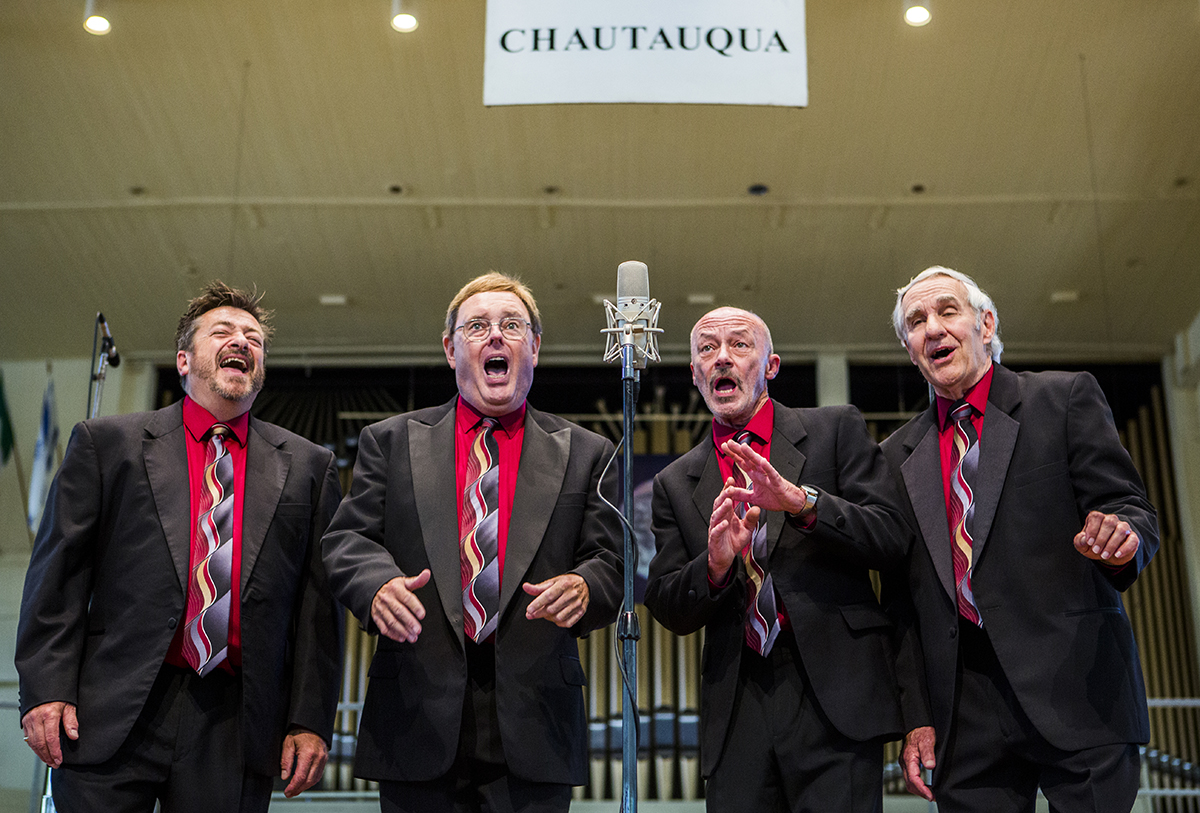 For more than half a century, barbershop quartets have been harmonizing in the Amphitheater. Before the venue is rebuilt later this year, the Barbershop Harmony Parade will perform one more concert on its historic stage.

“The variety will be appealing to almost every age of patron,” said Chautauqua Show Chairman George Jarrell. “Every barbershopper who crosses that stage is honored to be there.”

A style of a cappella music that has enjoyed a popular following since the early 20th century, barbershop harmony didn’t arrive at Chautauqua until 1950, when the Buffalo Bills performed on the Amphitheater stage. Although the group has no relation to the NFL team and were actually around well before them, the football Bills had to get permission from the quartet in order to use their name, Jarrell said.

Several years after their Chautauqua performance, the Buffalo Bills made their Broadway debut in the legendary musical The Music Man.

Sunday’s performance, although a parade in name only, will showcase the multitude of harmonies and styles that lend barbershop harmony its unique sound.

Barbershop harmony can trace its history back to the days of vaudeville, when the most popular place for men to hang out was, of course, the barbershop. Jarrell said if one person knew the melody of a popular song, then others could join in and supply the unique chord structure that has allowed barbershop music to endure throughout the decades.

“That’s how it evolved,” he said. “Not only in the United States, but we’re actually international. A lot of countries have quartets and choruses who compete every year.”

Chautauqua is able to continue a long-standing tradition by welcoming different barbershop quartets into the Amphitheater, but the partnership also has philanthropic aims. Many local barbershop quartets come together to form the Seneca Land District of the Barbershop Harmony Society, which devotes a great deal of resources to musical education.

Although the different quartets that perform at the Amphitheater are paid just like every other musical performer, Jarrell said the proceeds from the Barbershop Harmony Parade are devoted to helping others discover the beauty of barbershop.

“None of the performers that perform on the stage actually get paid,” he said. “They do it because they want to help the district provide education, mainly for youth, to be involved in and learn about barbershop harmony.”

More than anything else, Jarrell said he is excited to see how the performance is received by the Chautauqua community

“I think you’re going to be delighted with the harmony and the showmanship that is going to be displayed on stage,” he said. “I think that’s one of the reasons that Chautauqua has maintained this as part of their program. It’s all different every year.”