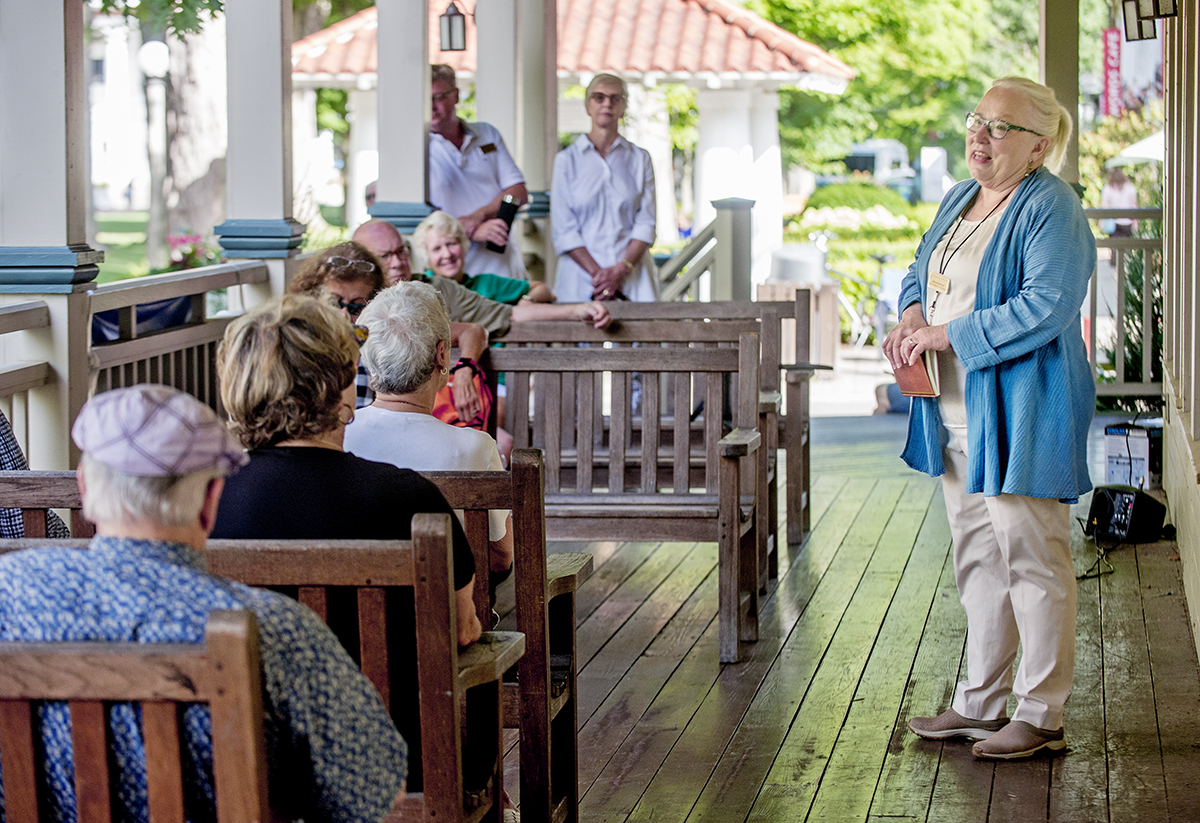 Sherra Babcock, vice president and Emily and Richard Smucker Chair for Education, wants everyone to take something away after their time spent at Chautauqua.

Babcock was introduced by trustee Sheila Penrose, who said there’s no better person than Babcock to talk about lifelong learning.

“One of the most important opportunities that we have — in terms of attracting people that come here or a particular theme — is the notion they have that they can take something home with them,” Babcock said.

Her discussion focused on a few key areas of her department. One focus was in partnerships.

She announced a new partnership that will be on the list for next year’s week on the Supreme Court. The Institution will partner with the National Constitution Center. The partnership, Babcock said, is one that is multi-level.

“They’re going to bring educational opportunities for children, opportunities for adults about how to viscerally feel, and those kind of things are expensive and are not the kind of things that we can develop on our own,” Babcock said. “We’re hoping by all of these partnerships and the ones we’re trying to develop for the more distant future, we give you more tangible material to take home with you.”

Other partnerships in the 2017 season include the National Comedy Center, National Geographic Society and the Center for Strategic and International Studies.

Babcock said she wants to see the work to which speakers devote their entire lives be passed on to Chautauquans, who might only have a week or less to be exposed to those topics.

Babcock also brought attendees through the developments of literary arts at Chautauqua.

“One of the things that [President] Tom Becker told me when he hired me was, ‘What I want you to do is take these disparate programs that we have in the literary arts and try to bring them together so that literary reputation of Chautauqua can be known, so that people can recognize what we do in the literary arts,’ ” Babcock said.

Now, the literary arts work together by providing classes through the Writers’ Center and programs with the Chautauqua Literary and Scientific Circle and CLSC Young Readers.

The importance of the inner-collaboration between the literary arts outlets allows the conversation about the topics to flow between all age levels on the grounds.

“Why am I talking about literature in a program where we’re talking about what we take home? Because the easiest thing to travel with is a book or a Kindle,” Babcock said.

Penrose prompted Babcock to explain a bit about the process to pick themes for the calendar. The team has a backlog of ideas, ready to revisit if they aren’t picked out of the nearly 150 ideas per year that are vetted based on details such as opportunities available and relevance.

When it comes to formatting lectures, Chautauquan Philip Kotler asked if debate formats would work or would be dangerous. Babcock said it’s being explored, but in the past, the platform has tried to give equal and separate time to explore their topics and opinions.

Chautauquan Hillel Weinberg asked if people could recommend themes or speakers as well. Babcock said yes, and only a few links and an explanation on the person is needed.

“Especially if you know them,” Babcock said. “That’s very helpful.”

The final Trustee Porch Discussion will feature Becker discussing “Looking Ahead to the 2017 Season.” It will take place at 12:30 p.m. Thursday at Hultquist Center.