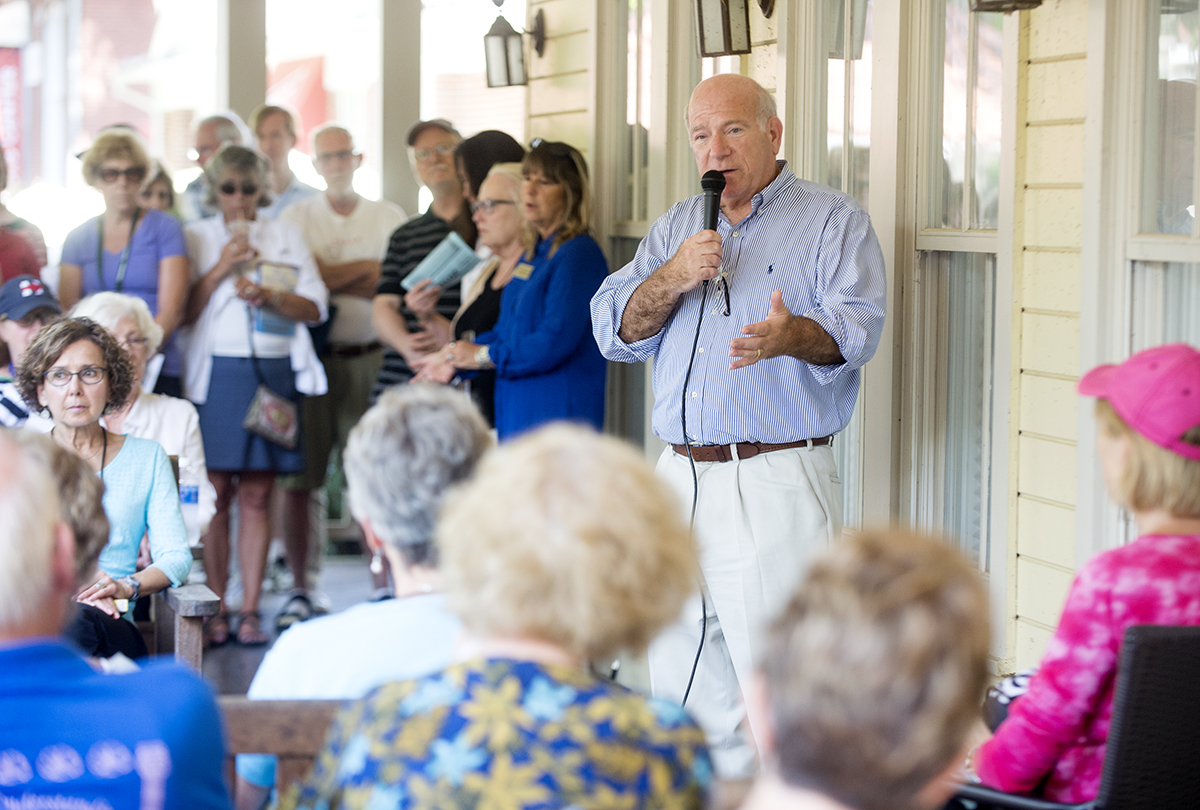 Becker spoke briefly about the process of nailing down the schedule itself, deferring to his vice presidents for programming specifics. Much of the season’s program is already available, which Becker said demonstrates an increased effort to finalize next season’s programming early so Chautauquans can plan their visits.

He added that community input is welcome and valuable for bringing prominent guests to Chautauqua.

“I’m guessing somewhere around 60 percent of the people we see on the lecture platform are there either because you identified them for us or you’ve told us how to get through the door to them,” he said.

Sherra Babcock, vice president and Emily and Richard Smucker Chair for Education, said her department focused on providing a road map of the season for Chautauquans to plan their visit.

“You will never have a whole season a year in advance, but we’re trying to give you as much as we can,” Babcock said.

She also noted the number of collaborations featured in the 2017 season. Chautauqua Institution will once again partner with the National Geographic Society, and new weeklong partnerships will take place with the Center for Strategic and International Studies, the National Constitution Center and the National Comedy Center in nearby Jamestown, New York.

Set to open October 2017, Babcock said, the Comedy Center’s facility will feature holographic appearances from deceased comedians and troves of materials from legends such as George Carlin. Chautauqua’s partnership will bring some of those resources for what Babcock said will be both a serious and funny examination of comedy before the center opens to the public.

“You will be seeing some things that no one else has seen yet that week,” she said.

Certain morning lecturers have been announced, but Babcock said many more are pending or contingent on future events. For example, Babcock said, actor Wendell Pierce, who delivered Thursday’s morning lecture on jazz and the musical culture of New Orleans, did not confirm his appearance until June because he was busy filming.

Deborah Sunya Moore, vice president and director of programming, later provided an overview of the arts at Chautauqua. Both Chautauqua Theater Company and the Chautauqua Opera Company have announced their full 2017 seasons, and portions of the Chautauqua Symphony Orchestra repertoire are finalized.

“We’re trying to stick with this common thread of balancing tradition and innovation,” Moore said, pointing to classic works such as CTC’s forthcoming production of Romeo and Juliet and more contemporary endeavors such as the opera company’s staging of Philip Glass’ Hydrogen Jukebox.

Popular entertainment groups usually announce summer tours just months in advance, Moore said, which means those events will be finalized at a later date. She did, however, say opening-night entertainment should be announced this fall and also confirmed an evening with Garrison Keillor.

During the Q-and-A period, one Chautauquan asked about the contract between the Institution and the CSO. Becker said the negotiations are ongoing and the Institution hopes to reach an agreement “sooner rather than later.”

“The idea that some of us in the administration are not interested in the continuation of a symphony orchestra is a pretty flimsy idea,” Becker said, pointing to the five-year contract with Rossen Milanov, music director and principal conductor of the CSO, as well as CSO-specific Amphitheater improvements as “obvious” signs of the Institution’s commitment.

Another Chautauquan asked whether beloved writer Roger Rosenblatt, who anchored this season’s Week One programming and received the President’s Medal, will return to the grounds. While Rosenblatt himself said at the end of Week One this season would serve as his valedictory, Becker did not rule out a smaller role for the writer — a single lecture or workshop, for instance. But Becker did say 2016 would probably be the last year Rosenblatt headlined a week of lectures.

“We’ve pretty much run the table on Rosenblatt’s friends,” he said.