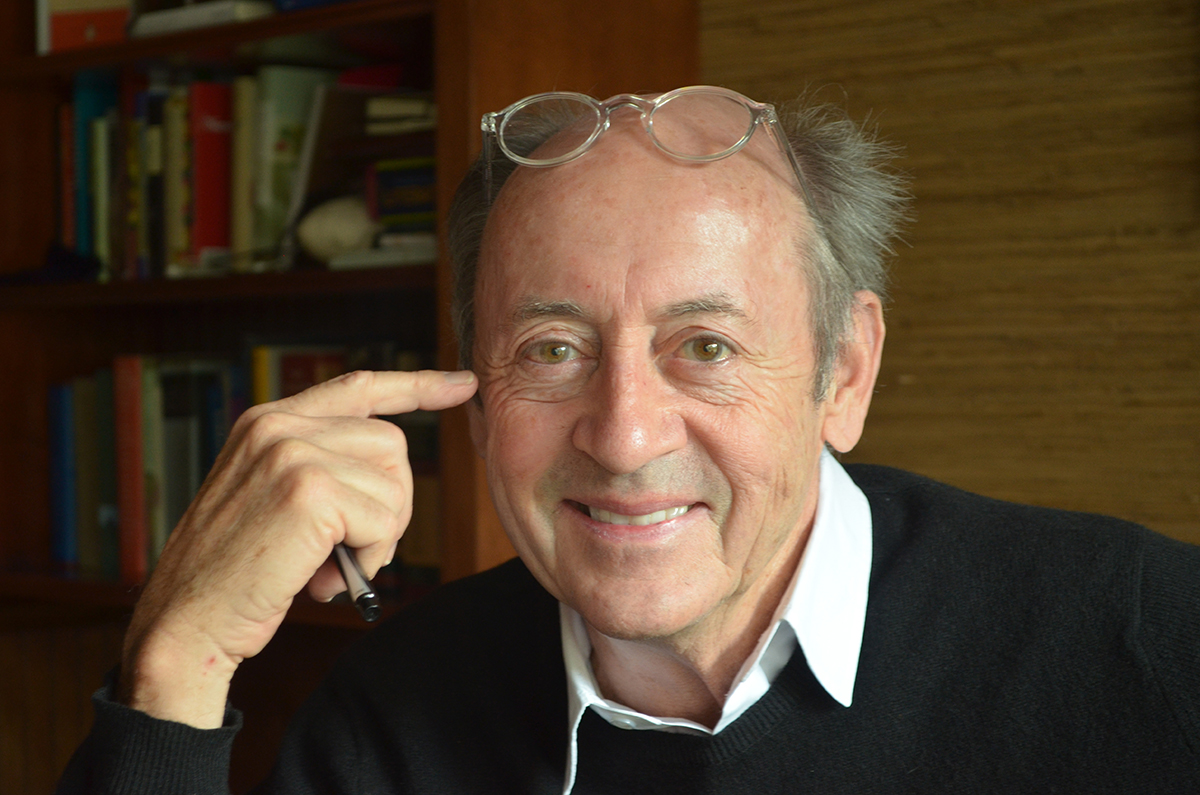 A little more than a decade ago, Georgia Court and President Tom Becker had a conversation.

As an active member of Chautauqua’s literary arts community, Court wanted to talk to Becker about how they could get authors on the grounds — something she knew Becker was interested in.

“I remember the conversation I had with Tom in his office,” Court said. “He said, ‘Well, if you can get Billy Collins here, that would be OK. We could do it.’ ”

They made it happen.

Collins has visited with Roger Rosenblatt and Paul Simon as part of the morning lecture platform and evening entertainment series, as well as with the Chautauqua Literary and Scientific Circle in 2012 for his poetry collection Horoscopes for the Dead.

Collins, the U.S. poet laureate from 2001 to 2003, returns at 3:30 p.m. in the Hall of Philosophy for Week Nine’s CLSC Roundtable, making him the last CLSC author to present during Becker’s time as president.

Collins’ visit comes during Week Nine, the theme of which is “America’s Music with Wynton Marsalis and Jazz at Lincoln Center.”

It may be a week celebrating music and jazz, but Collins thinks the connection often made between poetry and jazz is a little tenuous: He said it’s “romantic at best, and completely specious at worst.”

“Jazz is in my poetry in the same way that my dog is in my poetry, or the weather, or the three lemons on the table,” Collins said. “It’s just something around me a lot.”

Collins said he’s a big fan of jazz, but he’s not a fan of “jazz poems, per se.”

“They’re usually one of two kinds: They either try to imitate jazz in a mimetic way, like sounding syncopated, and of course, it’s not jazz — you can’t hear it,” Collins said. “It’s just notes on a piece of paper. And the other kind is, ‘You’re too hip, baby,’ which means dropping names and wanting to sound like jazz insiders. I find them both unreadable.”

He believes the more interesting connection between jazz and poetry is in their contrast, particularly when it comes to spontaneity. Collins said jazz thrives on improvisation, and while poetry can feel spontaneous, it’s often the result of a lot of work and revision.

“You can try to be as spontaneous as you want in poetry, like Coleridge, who could write on drugs, or the Beats in the same way,” Collins said. “You can take a bunch of Benzedrine, stay up all night and write and be spontaneous. But in the morning, if you have any sense, you’ll go back and look at it in the cold light of day and at least revise it, if not throw it out.”

Collins might not think much of the connection between poetry and jazz, but Sherra Babcock, vice president and Emily and Richard Smucker Chair for Education, said Collins and his work represent something quintessentially American, which made him a perfect fit for a week focused more broadly on America’s music.

“We’re trying to celebrate the rhythms of America,” Babcock said.

Babcock said Collins is a favorite of Chautauquans, and he seems to enjoy Chautauqua as well. The first time he visited the grounds, Babcock said 800 of his books were sold, which she thinks shows how much people appreciate his work.

“Billy is, quite likely, the most well-known poet in the United States,” Babcock said.

Aimless Love combines new and old work for Collins, an editorial process he said he enjoyed.

“It’s fun to go back and pick your best work,” Collins said. “That’s what selected poems really are: You’re really claiming, in a kind of poetic way, and saying, ‘These are my greatest hits.’ ”

Collins said it was nice to go back and re-evaluate his previous work and see what could carry the new poems he wrote for Aimless Love.

It also reminded him why he keeps writing poetry.

“I don’t think you’re ever satisfied,” Collins said. “I’ve written hundreds of poems, and there might be a dozen or so where I could look at them for years and never change a syllable. But usually, if you’re an artistic type, you’re never satisfied. If you’re satisfied with your own work, I think you’ll just repeat it, and you’ll probably stop writing at some point if you’re that satisfied. I think people continue writing — in my field, one is always trying to write the perfect poem, and every poem is a failure. You just continue to fail better, as they say.”

Part of that process of “failing better” has led to a new collection of poems for Collins, set to be released by Random House in October. It’s called The Rain in Portugal: New Poems.

“It’s supposed to be a hilarious title, but maybe it’s just an in-joke to me,” Collins said. “It’s sort of an admission that I’m not much of a rhyming poet.”

Collins said he’ll read a few poems from this collection for his presentation, which wraps up the CLSC programming for the season.

Collins said he was aware that this is Becker’s last year as president, but he hadn’t made the connection that he would be the last CLSC author to present during Becker’s tenure.

He said he’s flattered by the positioning, because he thinks Becker is “just a terrific guy.”

“He seems to run things and give a sense of effortlessness — he’s never sweating or popping buttons,” Collins said. “He seems to be cool, calm and collected, and he’s very reassuring in that way. I’m really looking forward to it.”