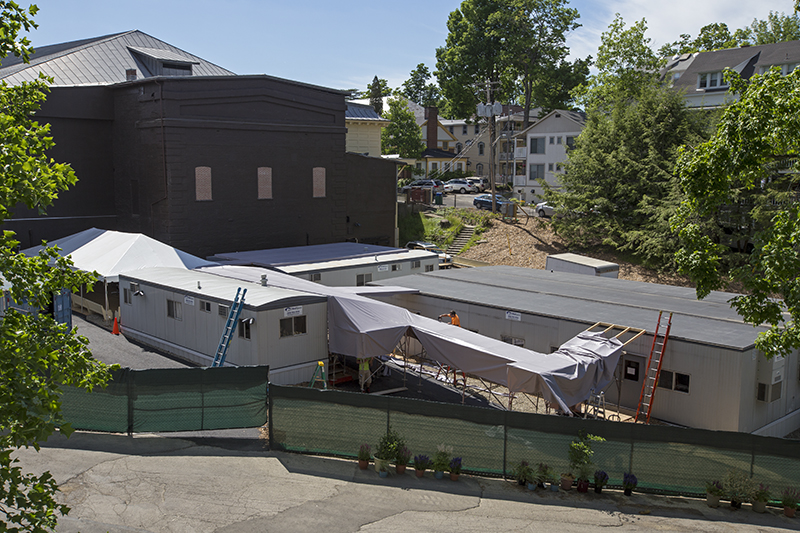 Work on Chautauqua Institution’s largest-ever public works project will resume Monday. After a series of intensive meetings last week involving the lead architect, construction manager and other key officials from inside and outside the administration, a detailed schedule for at least the next several months of work to rebuild Amphitheater has been developed.

While the $41.5 million project got a much-needed boost from the significant work that was accomplished during the last off-season, John Shedd, director of operations and administrator of architectural and land use regulations, said everyone involved is anxious to get moving again.

“While we’ve been continuing to refine the project and tinker around its edges this summer, it’s going to be real again starting next week,” he said. “It’s never been out of our minds, but now we get back [on the site].”

With the prospect of heavy work resuming Monday, the administration has scheduled a briefing for 1 p.m. today in Smith Wilkes Hall. The briefing is principally designed to continue efforts to keep property owners along the construction-vehicle routes and near the Amp apprised of news and developments.

“We know all the directly affected property owners will want the latest information,” he said. “All other property owners who want to attend are certainly invited. Smith Wilkes Hall can accommodate a few hundred people, so we think there will be room for everyone who wants to join us.”

Murphy will be joined by Shedd and project construction manager Rob Peters for the hour-long session, which will involve a few opening remarks before the floor is opened for questions.

Shedd said during the week immediately following the season’s end, the process of clearing out what remains of the back-of-house will be completed. Some minor work has been accomplished during the season, he said, and the Amp’s massive attic has been partly cleared. Crews will also be disconnecting  and removing the benches and prepping the rest of the bowl area for excavation. Shedd said the wooden stage materials will be saved.

“It will be reused in two places — in the choir rehearsal room in the new back of the house, and in the new green room for star guests,” he said.

Shedd said the Institution will also reinstall cross bracing to buttress the principal vertical support beams in the current Amp. The materials were first installed last off-season to protect the structure against winter snow and wind loads.

“We actually own these steel braces, so it makes sense to make the job site as secure as possible,” he said.

Also next week, the temporary trailers will be dismantled and removed from Artist Village, where they have housed guest artists, choir and orchestra music and administrative staff.

“The trailers were actually buried slightly in the ground to better secure them and connected to water, sewer and electric,” Shedd said. “Disconnecting and undoing all that will take a bit of time.”

Gas and electric for the entire Amp site will be shut down Aug. 31. Finally, crews next week will also remove the temporary perimeter fence around the Amp and the rented metal bleachers at its west end. No work is scheduled for Labor Day.

Beginning on Sept. 6, the remaining lakeside roof structure will be decoupled from the Massey Memorial Organ chamber, as part of completing the demolition of the old back-of-house. The lower-pitched, outward-most part of the roof covering the main bowl will also be decoupled.

Work will continue six days a week on the project, from 7 a.m. to 7 p.m. Sundays should be quiet.

During the second and third full weeks in September, the remainder of the Amp’s roof will be removed. Shedd expects that the roof will be gone by Sept. 21. Misting will be employed to keep down dust.

Also during those weeks, eight more heavy caissons will be installed along the Amp’s north and south sides, midway along each side. Each group of four caissons will form one large support unit.

“For various reasons, we couldn’t do this during last off-season,” Shedd said.

Concurrently, the organ chamber will be stabilized with the installation of an underground fence line of what are called soldier piles — concrete cylinders of poured concrete with reinforcing steel inside. These supports will be attached to and extend down into the earth below the pad on which the organ chamber presently rests, and will anchor it much more securely.

The schedule calls for removal of the choir loft area of the Amp during the last week of September.

Shedd cautioned that while no project of this size and scope can proceed without such detailed scheduling, weather and other variables may affect progress at stages during the off-season — positively and negatively.

Speaking in broad terms, Shedd said he expects the new Amp roof to be installed during the January to March 2017 period. Finishing and utilities should occupy the period from April to June.