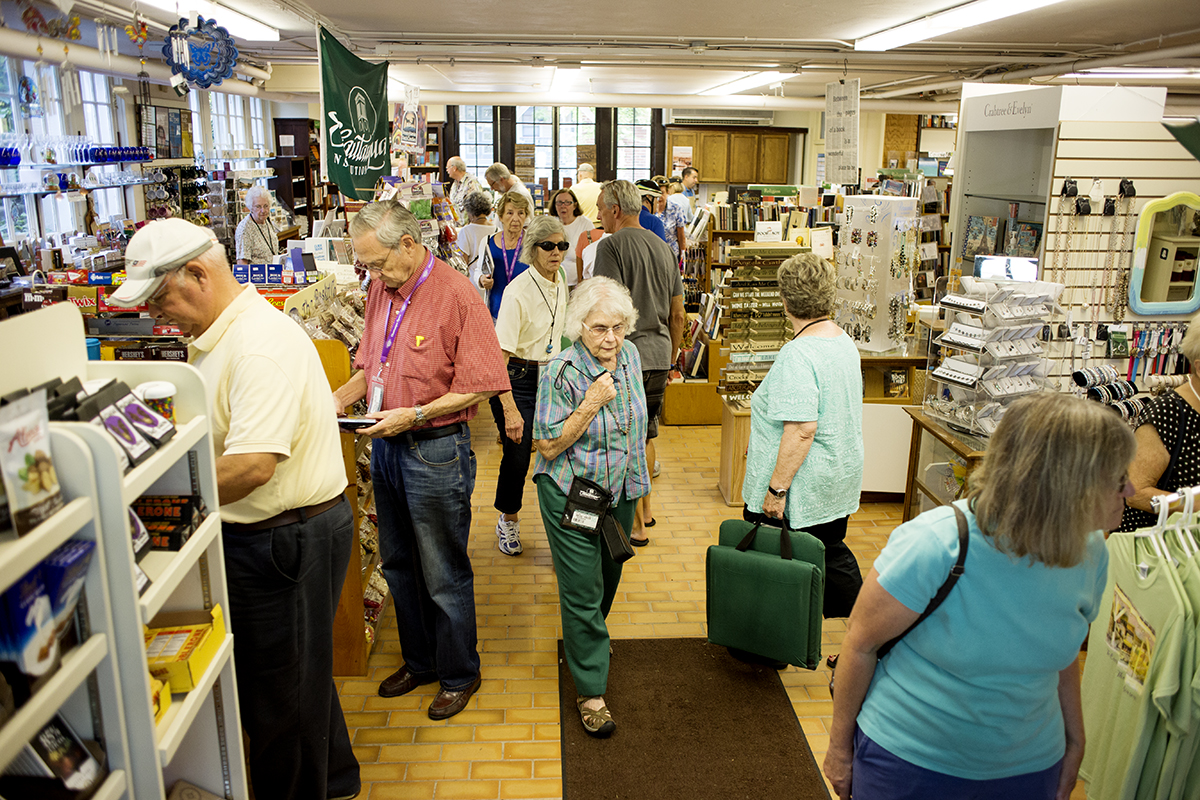 Stationery paper, a balsa wood airplane, a Richard Wagner action figure and a life mate: At one time or another, Chautauquans have found all of these things — along with books — at Chautauqua Bookstore.

“The bookstore means different things to different people, the same way Chautauqua does,” said Donna Dominick, assistant manager. “I think for a lot of them, it means home.”

The bookstore is in the early stages of a renovation plan that will address structural issues with the floor and front entrance and allow customers and employees to move more freely from one end of the store to another. In the current layout, certain fixtures, walls and shelves serve as an inefficient maze which both customers and employees must traverse in order to move through the length of the store. Large staff offices sit near the center of the sales floor.

“It’s so congested in here during the season that no one can move when it’s a busy day,” said Nancy Swanson, assistant manager. “It’s frustrating for customers. It’s very frustrating for employees trying to get from one place to another on a limited amount of time.”

Dominick said there have been times when she had to take the elevator, walk outside to the plaza and re-enter through whichever door was closer to the part of the store where she needed to be.

“We love having [Chautauquans] in here, and that’s why we’re here. Without them, there’s no us,” Dominick said, making clear that the problem is not with the customers. “But you need to be able to get where you’re going.”

General Manager Earl Rothfus said he thinks of the congestion of people in terms of energy.

“There can be a huge amount of energy in the front of the store, sometimes so much energy that other people want to come in and they get bounced out by that energy,” he said. “The energy really wants to flow through, but the way the store was designed and the way it’s laid out with the fixtures and these offices in the middle of it, you know, it really constricts that energy flow.”

Rothfus is consulting with design firms that specialize in the layout of independent bookstores. They visited during Week One, when “Doonesbury” cartoonist Garry Trudeau spoke at the Amphitheater.

“We had a couple hundred copies [of his new book Yuge!: 30 Years of Doonesbury on Trump] that sold out within 15 minutes,” Rothfus said. “[The designers] probably saw the bookstore as busy as it has ever been, so they got a very good sense of what sort of issues we’re dealing with in terms of the congestion and the crowds, and the need to find some better solutions for servicing people.”

Rothfus said his vision for the store is to move the main entrance to the center of the plaza, and to install a customer service island just beyond the front doors where customers can make special orders, pick up reservations or find help locating a specific item in the store. He hopes the project will be completed within two years.

Marilynn Oelsner has been at Chautauqua with her husband for most of this season. She visits the bookstore about once a week, and she said the renovation plan is progressive.

Even while big box stores such as Barnes and Noble or Books-A-Million manage to adapt and survive, independent shops have had a rough time of it.

“Bookstores are a dying breed,” Swanson said. “[But] as long as Chautauqua Institution is here, we will be, too.”