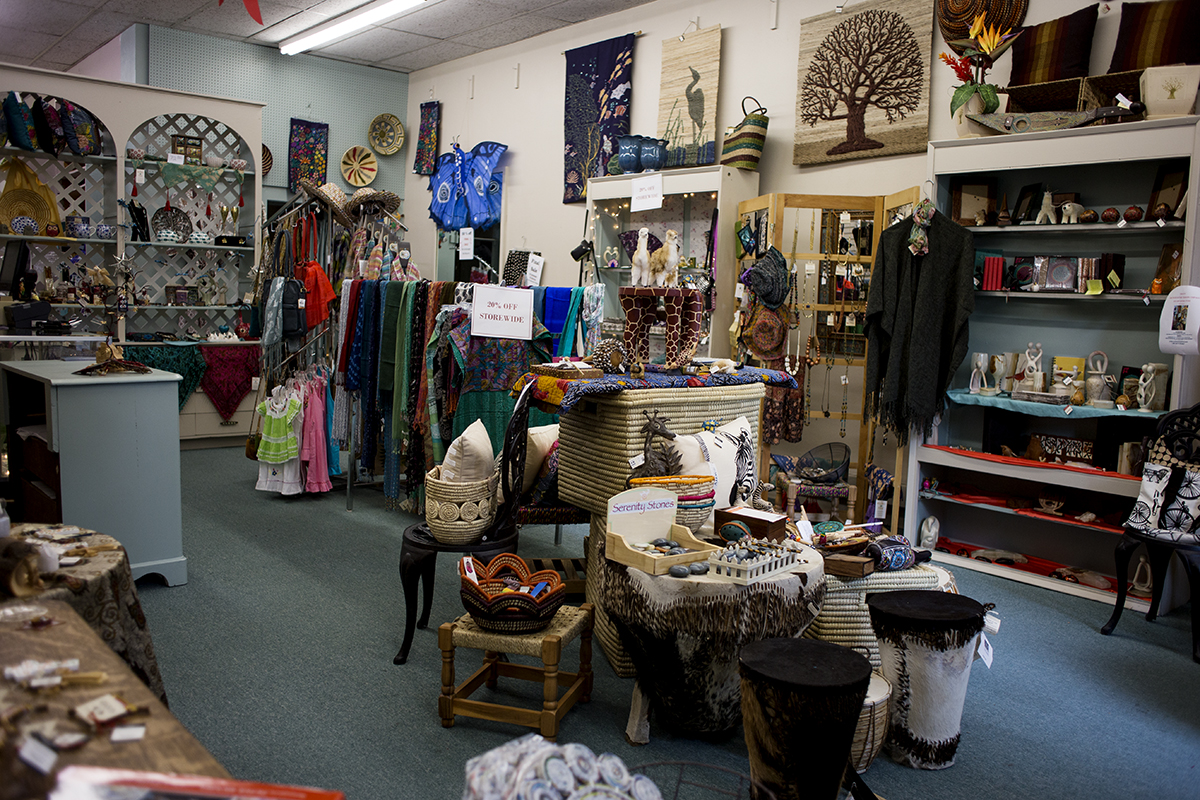 After relocating the Chautauqua Fair Trading Company to the first floor of the Colonnade last year, Earl Rothfus said he thought the change would be a “home run.”

However, that wasn’t necessarily the case, and although the more visible storefront did help business, it didn’t do so at a level that matched Rothfus’ expectations.

“This idea is almost ideally situated for Chautauqua, and when I first opened up the store, I thought that it would be like a zoo,” said Rothfus, who manages the Chautauqua Bookstore. “The problem is really with promotion and getting people to understand that it’s over there.”

Rothfus decided to start carrying products from the fair trade company, Ten Thousand Villages, in the bookstore in 2005, and in 2013 opened a satellite store called the Chautauqua Fair Trading Company in the basement of the Colonnade. Then in 2015, the store moved to a bigger and more prominent location in the first floor of the building to include larger pieces such as wall art and hammocks that couldn’t fit in the original store.

Ten Thousand Villages, created by by the Mennonite Central Committee in 1946, was one of the first fair trade companies dedicated to selling products made by people in developing countries and pay them livable wages and under sustainable conditions. Since then, the movement has taken off and many companies are engaging in the same trade to help producers around the world.

“The demographic that fair trade companies shoot for, the one that they expect makes up their core clientele is exactly the Chautauqua demographic: educated, well-traveled, socially conscious, aware of things that are going on in the world,” Rothfus said. “People here at Chautauqua are connected to the world more than most; that dovetails perfectly with what’s going on as part of the mission for fair trade companies.”

The store currently has products from about 20 countries, said manager Adele Thomas, such as chocolates made with cocoa beans from Ghana, prayer flags from Tibet, linens and tablecloths from India and other products from Peru, Zimbabwe, Vietnam and more. They mostly stock items from Ten Thousand Villages, but there are pieces from other companies such as Serrv and Rising Tide, Rothfus said.

Thomas said for the first time this year, the store started carrying local products such as jams and jellies made in Mayville and maple products from Falconer. For next year, Rothfus said he wants to include more local products and even add Native American-made or Amish-made pieces.

Although the prices at the store will almost always be higher than they would be for a mass-produced product, Rothfus said, it is because they were made in safe and sustainable environments instead of in a crowded factory.

“You might look at an earring and you say, ‘Wow, it must have taken somebody hours to do that.’ The same earring that would have taken seconds to make on some mass-producing machine and the price might not be that much different,” Rothfus said. “That gives you an idea of what their standard of living is that they need so little compared to what we do in terms of dollars and cents to actually have some sort of sustainable life.”

Similarly, Thomas said, the money will go toward a good cause, so people aren’t just spending needlessly.

“[People] are just happy to shop here and they don’t feel like they’re wasting money, just buying another item,” Thomas said. “That’s the big thing: They feel like they’re doing something to help other people and that’s really what we’re here for.”

People who visit the Chautauqua Fair Trading Company have always given supportive and positive responses toward the store’s mission of fair trade, and will even provide feedback to better that goal, Rothfus said.

“There have been a couple of times where I’ve had Chautauquans come to me and question some of the things that we’ve been doing over there because they have looked at some of the product and questioned whether or not that was in fact fair trade, and they’ve been correct to question me,” he said.

In the past, the store sold a skirt that was popular but turned out not to be fair trade, although the company itself sold other fair trade products. When Rothfus found out, the store stopped carrying it. Because of that, Rothfus said he is very careful to check for the label and inspect if each product is actually fair trade.

For Rothfus, the next step is trying to attract new customers, and in the next week or so, the store will be running sales. People who are already interested in fair trade will seek it out, and those who aren’t will not, regardless of store visibility, he said.

Despite some disappointments, Rothfus remains dedicated to the mission of fair trade. He said he is sure that Chautauquans are the right demographic for that type of store and wants it to be somewhere everyone stops in at least once during the summer, much like they do for the bookstore.

“In this country, Western society, developed societies, we have so much and it just seems like a really good idea that for everybody’s sake, we should find some way to share in a way that is voluntary and is a positive outcome for everybody,” Rothfus said. “It’s a very positive outcome to get something beautiful that you can put on your table and know it was made by somebody … and to know that you have this beautiful thing and that the person who made it is benefiting to some degree from their work. So it’s just a good thing.”