When the Chautauqua community converses with Fareed Zakaria today, they’ll be joining an exclusive club with the likes of President Barack Obama, former British Prime Minister David Cameron and the Dalai Lama.

Though it’s arguably his brand, Zakaria won’t be delving into politics when he speaks at 10:45 a.m. Tuesday in the Amphitheater. He thinks people would like a break from the topic. 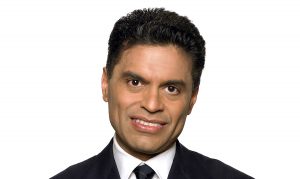 Instead, he’ll be discussing what he calls the “hyper-revolution” taking place in the world of technology and the definition of humanity in this new world.

Zakaria wants to bring that discussion to Chautauqua Institution because he thinks the forum is ideal for talking about it.

Some of the topics he’ll be discussing include the IBM computer system Watson, the Google self-driving car and medical diagnostic tools. He hopes presenting the topic at Chautauqua will help him learn how to potentially do it for a TV format.

“The world is a complicated place and we’re going through some tremendous very deep and broad changes. … We can’t understand it if we revert to slogans or, you know, to simple-minded ideas of us and them,” he said.

Zakaria is host of CNN’s foreign affairs show “Fareed Zakaria GPS,” or Global Public Square. In his eight years at GPS, Zakaria has interviewed politicians from all over the world, including two rare interviews in 2008 and 2010 with Wen Jiabao, the then-Chinese Premier. Chinese leaders do not usually grant interviews to Western media.

“I would like to [think Jiabao chose us because] we have built a program here on CNN that … has a wide reach, that, you know, has a large audience but also that has a reputation for really dealing with the biggest, most important issues of the world,” he said.

Zakaria, who is also a columnist for The Washington Post and contributing editor for The Atlantic, has authored and co-authored more than five books, including The New York Times best-seller The Future of Freedom and last year’s In Defense of a Liberal Education.

He said what he’s attempted for the past 30 years is to help people understand the world.

“I think I have that ability to maybe understand what the world looks like from the outside and yet to be strongly and deeply rooted in America and its interests and its ideas,” said Zakaria, who grew up in India. “I’ve always tried to bring that perspective to bear as a way of helping Americans understand the world.”

Zakaria has been called a political centrist and doesn’t necessarily deny that label. He doesn’t believe he needs to pick a political team.

“There is no monopoly of virtue on one side or the other. … I think on many issues the Democrats have some very good point,” he said. “The Republicans have some good points, too, and ideally policy would almost find a way to take the best from both sides.”