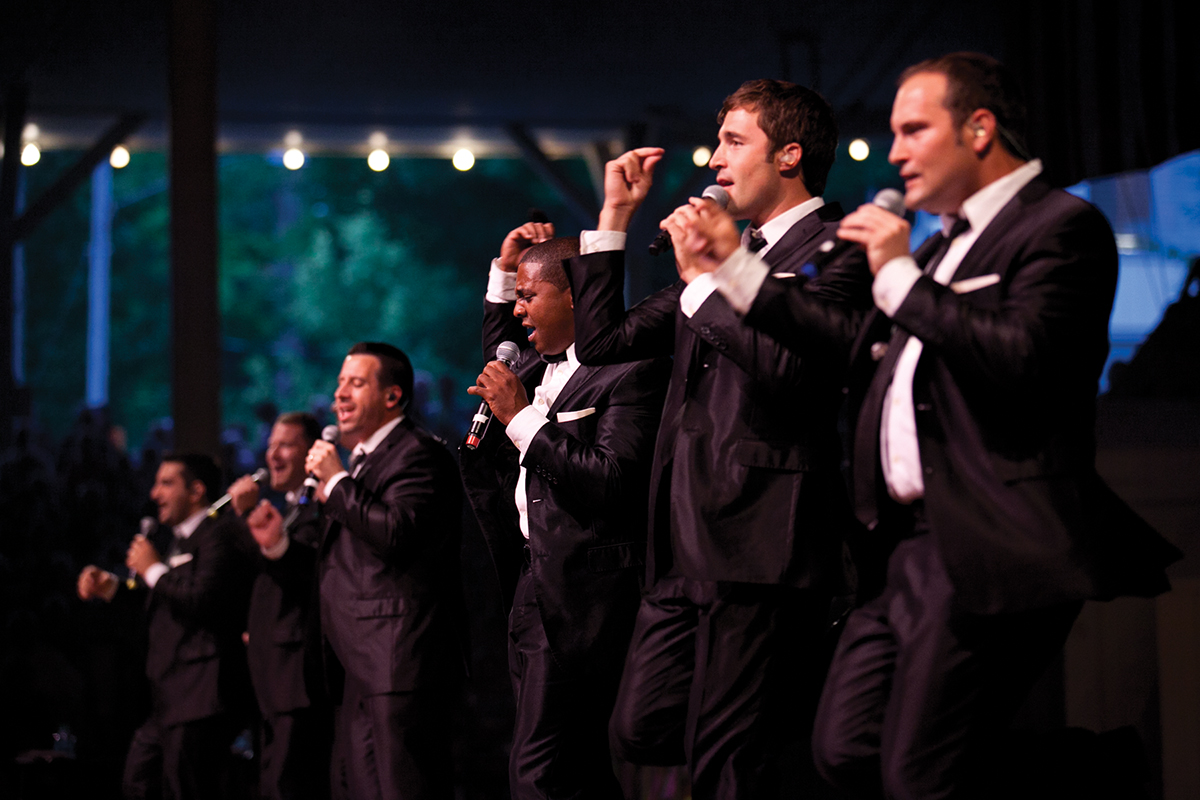 Straight No Chaser is now performing for sold-out crowds and singing in recording studios, but there were two original motivations the a cappella group sang for in college: food and girls.

They started out at Indiana University and have now created a career out of creating 10-man harmonies. The group will showcase its vocal talents at 8:15 p.m. Friday in the Amphitheater.

This is Straight No Chaser’s fourth time performing at Chautauqua. The band previously performed in 2011, 2012 and 2013, said Lisa Gierszal, performing arts coordinator in the Institution’s Program Office.

At Indiana University, they were a break-off of the show choir “Singing Hoosiers,” said tenor Steve Morgan. For the group’s 10-year anniversary, one of the members, Randy Stine, uploaded a video to YouTube of them singing “12 Days of Christmas.” The video went viral. Today, it has more than 19 million views.

Morgan said Atlantic Records reached out to Stine and asked if the band wanted to reunite. It sounds like the dream of any person trying to make it in the industry, but for the members of Straight No Chaser, they’ve seen a world outside of the fame.

“That’s what separates us from other groups,” Morgan said. “All of us have done other jobs in our lives and realized how lucky we are to be able to do this full-time now.”

“We’ve just had so many pinch-me moments in the last few years,” Morgan said. “Getting to sing back home again in Indiana at the Indianapolis 500, getting to tour Europe, getting to play sold-out shows at so many incredible venues — the outdoor venues that are just huge places like Chautauqua, like Wolf Trap at Vienna, Virginia. And you walk out and there’s just a sea of people and you go, ‘They’re coming to see us. How cool is that?’ ”

“A lot of people’s preconceived idea of a cappella is a bunch of guys in blazers with beanies and singing barbershop harmonies and the old songs,” Morgan said. “We cover it all; we put some movement in there. We put a ton of humor into a show. It’s one of those things where the audience is totally in on everything with us and everyone is having a good time together.”

With so many voices to create music, Morgan said, they “can put a bunch of different textures onto every song,” without the use of any instruments. That can be difficult.

“When we go into the show, we do about an hour and a half every night, and sometimes two-show days,” Morgan said. “With an a cappella show, you’re up there singing the entire time. It is vocally demanding, but I feel like the reward is greater, too, because you are just so connected with each song and you have to figure out almost what character each song gets to convey the overall emotion that you want the audience to have.”

All of their songs are arranged by members of the group, Morgan said.

“While they’re putting the songs together, they know who the soloists are going to be and they have in their head what it’s going to sound like with each guy singing their part because we’ve been working with each other for half our lives,” he said. “The construct of arrangements is just different if we were just buying stock arrangements from someone else.”

Morgan said he and the band are excited to come back to perform in the Amp.

“It’s really fun because we have to think about the show in a totally different way,” Morgan said. “We can’t just perform in one direction or do everything like we have in the past because some people would be looking at your rear end the whole show. So it’s fun to put on a different hat and say, ‘OK, how do we change the show? How do we make it more engaging more interactive with people being in a 360-[degree] environment?’ ”

Morgan has two children; with seven fathers in the band, Straight No Chaser hope their passion for singing and the band is conveyed to their kids. He said they all value time at home but can take more than just their singing talents with them on the road.

“When we have to pack up luggage, dads are notoriously good packers, so we’ve been really good at packing the bus with all of our luggage,” Morgan said.