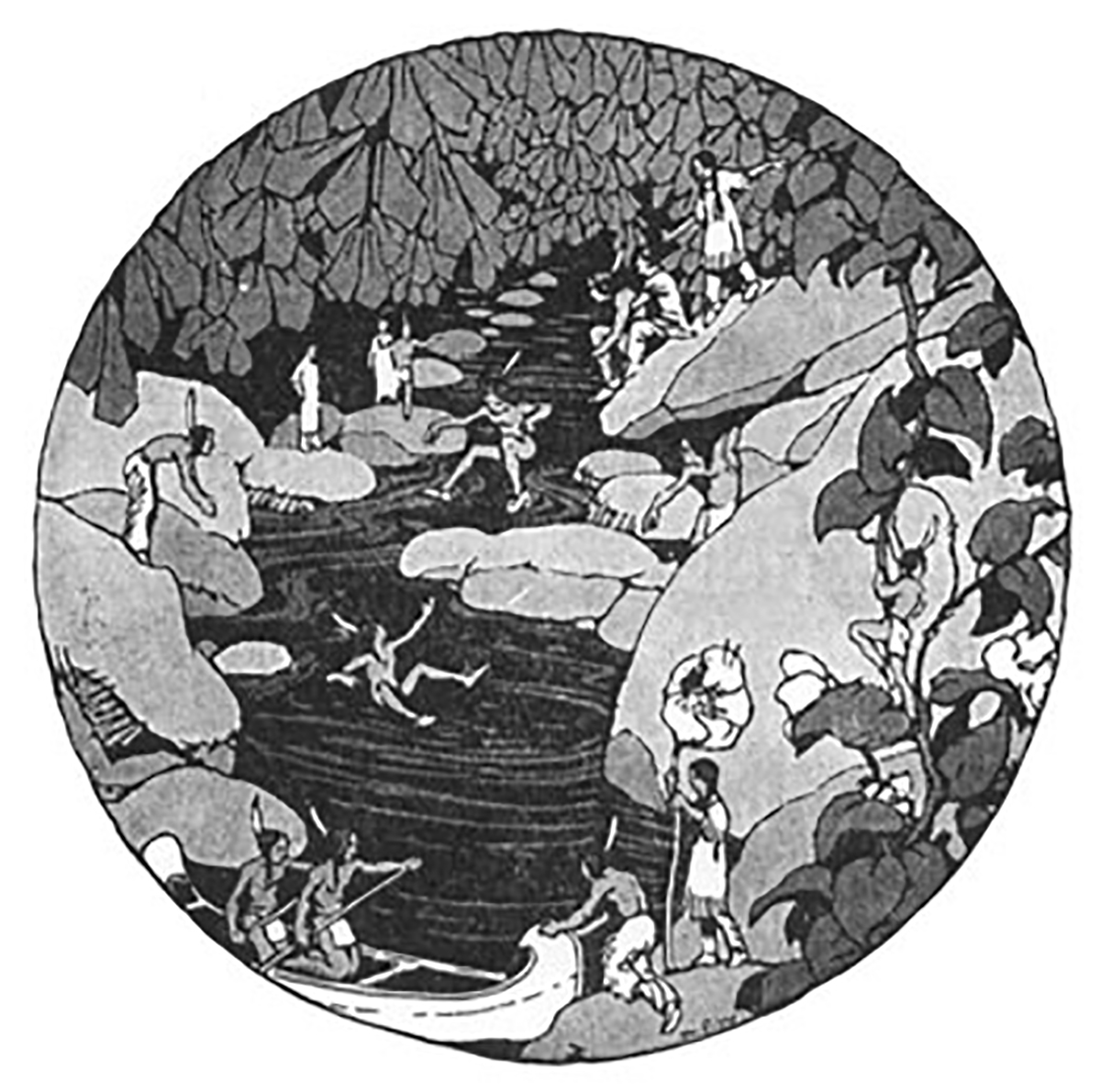 Mabel Powers was a woman both ahead of and behind her time.

A writer, lecturer, feminist and pacifist, Powers was best known as an advocate for Native American history and culture, particularly that of the Iroquois. From 1915 until her death in 1966, she appeared on various platforms at Chautauqua Institution more than 130 times. Arthur Bestor, the longtime president of Chautauqua, is said to have called her his favorite Amphitheater performer. She wrote dozens of books and articles, some of which are still in print. Her stories of Western New York were compared to Washington Irving’s tales of the Hudson Valley and to James Fenimore Cooper’s stories of Central New York.

Yet, today she is largely forgotten. Which is a shame, because her ideas and her life are just as relevant and fascinating now as they were during her long lifetime.

Ella Mabel Powers was born in Hamburg, New York, in 1872 to Richard Franklin Powers, a preacher, and Lydia Post Powers. Called Mabel, she attended East Aurora High School and Buffalo State Normal School and later studied elocution and drama in Philadelphia. Her interest in Native American culture began in her childhood, and she made many Indian friends. By her 20s, she was publishing articles about the Indian way of life in newspapers and magazines. She also wrote extensively about women’s rights and world peace, but she had little success in getting that work printed.

“If this is civilization,” she said in frustration at the time, “then let me be a savage.”

In 1910, Powers was invited to participate in the Green Corn Ceremony held on the Tonawanda Seneca Reservation near Akron, New York. There, she was adopted into the Snipe Clan of the Seneca Indians, one of the six Iroquois nations.

An article by Susan Hanks Singleton in the Chautauqua Sampler of March 1998, quotes Powers’ description of the event.

“After holding a long council, the members of the Seneca Nation agreed that I should be called ‘Yesennohwehs’ (the One Who Carries and Tells the Stories),” Powers wrote. “I did not then think that I would ever do much speaking and writing for the Indians, but I have found so much valuable information and truths for living among the people by whom I was adopted, and from other Indian people, I am eager to pass on the knowledge to others that they may come to know the Indians as I have known them.

“One of the most essential requirements of peacemaking today is an appreciation and understanding of people differing greatly in their traditional beliefs and racial backgrounds,” she wrote.

By 1915, Powers had made telling the stories of the Indians her life’s work. She lectured widely about Native American culture at universities and institutions around the country. She dressed in Indian clothing and wore her black hair long and braided, often with a headband with a feather in it. She published her first book, Stories the Iroquois Tell Their Children, in 1917.

In it, Powers tells stories she learned from the six Iroquois nations — Seneca, Onondaga, Oneida, Tuscarora, Cayuga and Mohawk. The tales of Iroquois living in harmony with fairies, animals and nature are attributed to individual members of those tribes in the beginning of the book. An introduction is written and signed by the chiefs of each tribe. The book was a success and remains in print nearly 100 years later.

“They are mostly legends of animals and men in their relations to each other and to the Great Spirit — why the hermit thrush is so shy, why the woodpecker bores for his food, why the eagle defends Americans, are some of the subjects,” Reedy’s Mirror, a contemporary magazine, said in its review of the stories. “The Indian is shown as possessing much the same traits of man as any other race, though he differs in being sensibly grateful for the bounties of nature, which the white man accepts as his due.”

That summer, Powers appeared at Chautauqua for the first time on June 29 and 30. Her lectures at the Hall of Philosophy dealt with the ongoing war in Europe and touched on Native American life, feminism and world peace. The Chautauquan Daily reported on it.

“It was the coming of the war that drove Miss Powers to the trail of the Indian,” the Daily’s correspondent wrote. “There was nothing in savagery that was comparable to the terrible war. Nature was allowing civilization to kill itself, and when that was so nearly done that only a remnant was left, she was ready to take that remnant and bring it back to herself.”

“The Indian has more to give us than we have to give him,” Powers told her audience. “I have met nature-trained men and women the like of which, for spiritual power and reality, I have not found among the Paleface. I have learned from the Indian that we are all the children of Mother Earth and it is only when we have found our common mother that we learn the great lesson of brotherhood. All that we white people know of nature is that it is a place where we hike or bike or motor through.

“The woman’s place among the Red Children was one of preeminence,” she continued. “The destiny of nations lies in the hands of woman. This war is upon the world because woman the peace queen has proved untrue and has failed to teach her men the great lesson of love.”

Powers loved Chautauqua Lake, and recorded how the Seneca had named it from the Iroquois words “rajah,” meaning fish, and “gadahgwah,” meaning taken out. The name Jahdahgwah means “the place where the fish were taken out.” (This story may disappoint people who have grown up thinking that Chautauqua means “bag tied in the middle,” but as Jon Schmitz, the Institution’s archivist and historian, points out, Native Americans did not have airplanes or balloons from which to see the lake from high above.)

Powers built a bungalow on the Jahdahgwah’s shore in Wahmeda, about mile north of the Institution. She stayed there, later constructing a larger lodge which remains. There, she began a tradition which continued until recently: the fire circle. The fire circle was a large fire started by, yes, rubbing two sticks together, and around which people sat to listen to stories. Over her five decades at Chautauqua, Powers became famous for the stories she told and songs she sang around the fire circles.

The Bird, Tree & Garden Club constructed an area in the ravine on the grounds known as the Mabel Powers Firecircle, where Yesennohwehs’ performances were recreated for subsequent generations of Chautauquans. Joan Smith, the former director of Children’s School and a champion of Powers’ legacy, said the practice was gradually abandoned and the site given over to the Boys’ and Girls’ Club. The last Powers-like fire circle was held there in 2013, with the storyteller and author Paul Leone weaving Iroquois tales.

Powers spent her life in and around Chautauqua (in later years, she lived in The Ramble on the grounds) until her death in August 1966. But throughout the first half of the 20th century, she traveled widely, extolling the virtues of Native American culture and advocating for women’s rights and world peace. In 1924, she was invited by Jane Addams to address the conference of the Women’s International League For Peace and Freedom in Washington. That same year, she published The Portage Trail, a history of the route the Indians blazed from Lake Erie to Chautauqua Lake, which contains her story about how Chautauqua got its name.

In 1932, Powers came out with The Indian as Peacemaker, a book describing the Great Law of Peace, a 1,000-year-old Seneca philosophy on how to achieve peace based on a treaty agreed to by the five Iroquois nations before they were joined by the Tuscaroras.

“Believing that the most essential factor of peacemaking is the study of backgrounds of peoples differing greatly in racial and traditional life, together with the recognition of the peculiar good and genius of each, I have attempted to record the peace story of the Red Man,” she wrote in the book’s introduction. “Every race has its own contribution to make to peace. Each nation must bring its own beautifully colored and carved stone to place in the great Temple of Brotherhood where foundations are being laid.”

From then on, Powers dedicated her life to promoting what she came to call “The Original American Blueprint for Peace,” writing articles that were translated and published around the world.

Today, most people have never heard of Powers. Most of her books are out of print. Others that remain in print are hard to find. Bookstores in the area she called home do not carry them. The Chautauqua-Cattaraugus Library System stocks only one of her books, The Portage Trail, although the Patterson Library in Westfield has a collection in its archives, and the McClurg Museum in Westfield houses her papers.

When she died in 1966, at 94, Powers was buried alongside her parents in a cemetery in Springvale, New York. Her name did not appear on any monument, however, until Smith led an effort in the 1970s to make sure she was honored there. The fire circle named for her in the ravine at Chautauqua no longer burns.

In her last lecture at Chautauqua, on July 29, 1961, at the age of 89, Powers returned to the theme that consumed and defined her all her life. (Her words were recounted by the Rev. Bill Lytle in a lecture sponsored by the Chautauqua Historical Society at the First Presbyterian Church in Westfield in 2000.)

“We love the Indian,” she said then, “because he brings to us the joy, freedom and peace of the waters, the beauty of the woodland, the power, poise and endurance of natural rhythmic motion, and most of all, the kinship and oneness of life.

“The Indian has held in trust for us the Soul of America. While we have been wandering in the far country of commercialism and materialism, he has kept the guide fairs burning until we Americans would arise to claim our heritage. There is a place in the sun that belongs to the American Indian.”