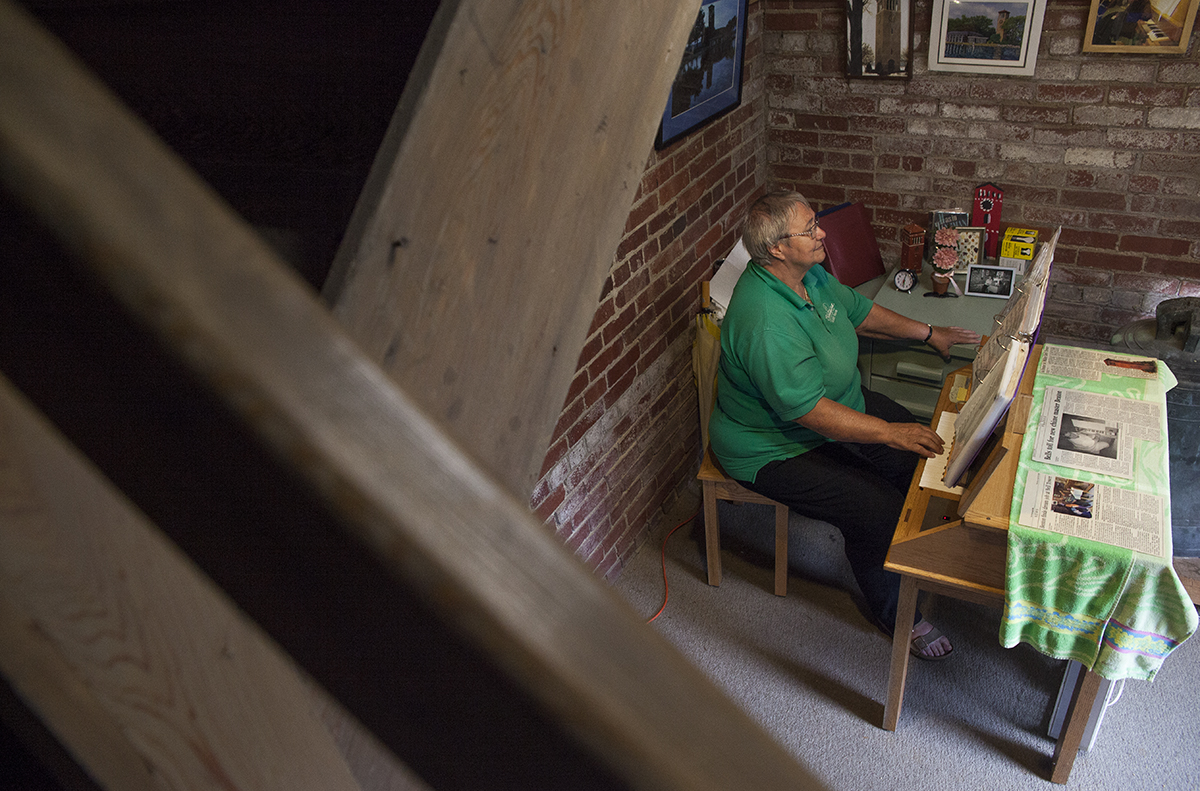 Every morning during Weeks One through Nine since 2002, chimemaster Carolyn Benton has woken up and taken a ride on one of the Institution’s buses to the door of Miller Bell Tower, where she plays a concert three times per day for 14 and a half minutes.

But since the installment of a new brick walkway this year in Miller Park, the bus hasn’t been able to bring Benton to the end of her commute, and with some limitations in her mobility, that nearly brought her to the end of her chiming career.

“I tried to retire, but they gave me an offer I couldn’t refuse,” she said, dangling an elastic lanyard with a small key waving at the bottom of the loop. “They asked me what it would take for me to stay, and I said, ‘A scooter would be nice.’ And it is.”

But, she said, if she had retired, she could not imagine that there was someone waiting in the wings to take the job.

“I don’t know who would do it,” she said. “The schedule is interesting. You’re sort of chained to this clock tower for 65 days. But I love this job.”

Benton believes that anyone could play the part of chimemaster, as long as they love the tower and don’t mind coming down three times per day.

“As long as you have 10 minutes of instruction, you can play this,” she said. “But [the bell tower] has a mind of her own.”

She said playing the bells is a challenge for people who play the piano, because the tower does not allow for certain techniques.

“You have to bounce every note, no matter how long it says to hold it,” she said. “And one key will not play two notes in a row. Certain harmonies don’t go together. You have to learn what she will or won’t do.”

Since she leaves the door open while she plays the bells, visitors are a common occurrence. Even dogs know to charge into the bell tower at 8 a.m. to grab a Milk-Bone treat from one of Benton’s free hands.

“I’m a big multitasker,” she said.

Chief among her reasons for not turning in her badge is the mark she gets to leave on visitors and residents of Chautauqua.

She recalled one time last year when Charles Bestor came down to see her in action. She keeps a brochure with his signature on it near where she plays. Bestor, son of longtime Chautauqua president, Arthur Bestor, died a few months after his visit, but Benton will always remember the 90-year-old man who obliged when she asked if he’d like to press a key.

But whomever visits her, Benton’s greeting is always the same.

“Would you like to play a note?” she said.

It’s something she does mainly for the younger kids, but older visitors or even performers from the Amphitheater are always welcome.

Benton grew up coming to the Institution, but due to her family’s finances during some of those early summers, she would only come for free Sundays. Decades later, Benton is still on the grounds, lulling everyone to sleep at 10 p.m. Sunday with Brahms’ Lullaby.

“It’s the most beautiful way to end a night in Chautauqua,” she said.

On a recent morning, while chatting and inviting a guest to play the final note of 14-and-a-half minutes of music, Benton looked up toward the ceiling of the tower’s first level.

Morning Worship Column: Be Ready to Get on the Train of Faith and Freedom, Andrews Says