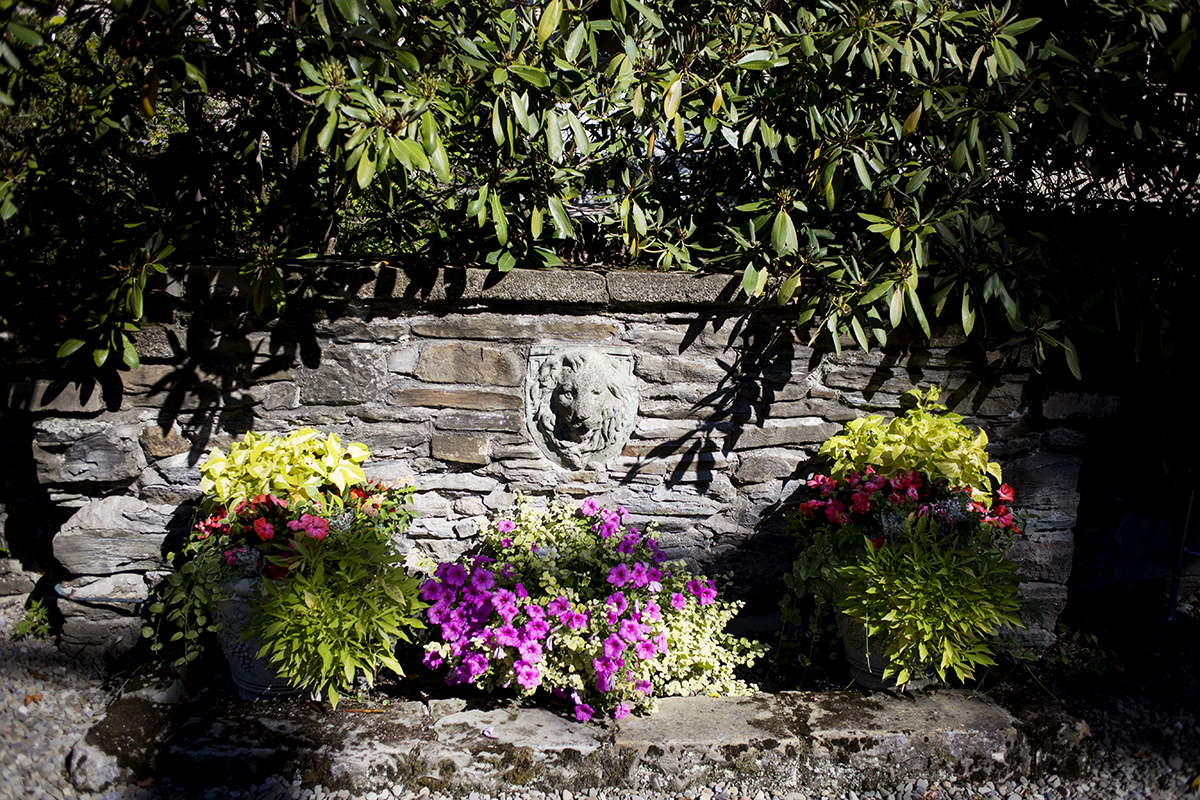 At 1 p.m. every Thursday, all summer long, Supervisor of Gardens and Landscapes Betsy Burgeson has held court near the gazebo by the Amphitheater. Armed with her comprehensive knowledge of native and invasive flora and an illustrative rendering of landscaping planned for around the new Amp, she has fielded questions and heard impressions from 30 to 50 interested Chautauquans every week.

“Talking with Chautauquans each week has been a treat,” Burgeson said. “They are attentive and very eager to learn about the Institution’s plans for further beautifying the grounds and more specifically, the area around the new Amp.”

But there’s more to it than that, she said.

“I got questions about hose bibs for watering the new rain gardens on the lake side of the Amp. I checked on our master drawings and sure enough, there were none,” Burgeson said. “They have been added. Also, people asked about permanent benches and bicycle racks on both the east and west sides of the new Amp. Again, they weren’t in the plans, so we added them.”

She said that 42 trees have been removed from the Amp area, but that 53 will be planted in their place as the Amp project proceeds. About 1,600 shrubs and perennials will also be installed.

Burgeson said native plants had been used in restoration and development of rain gardens in Miller Park and at the base of University Hill during the past couple of years.

“We haven’t watered them at all through the drought we’ve had in the past several months,” she said. “Look at them. They are flourishing. We plan for a similar outcome in the 10 rain gardens we will install around the Amp.”

When it comes to stormwater runoff, Burgeson has a simple approach.

“Slow it down, spread it out, soak it in. That’s our mantra,” she said.

“I think most Chautauquans know that we have been completing a comprehensive tree map showing every tree on our grounds and in our canopy,” she said. “Our arborist consultants have done surveys and examined our trees.”

As a result, more than 600 trees have been taken down. Another 159 have been identified as future problems.

“We have used all the information we have to basically reload and rebuild our tree population and canopy with younger, healthy trees,” Burgeson said. “The fact that this activity comes at a time when the Amp project is proceeding means a lot of disruption at one time. But as the new Amp comes on line next year, trees will be in place for the long term and our gardens will have been prepared to beautify the grounds again.”

The Amp gardens will be laid out at the beginning of next season, but Burgeson added a cautionary note.

“There are a couple of variables over which we will have little or no control,” she said. “First is the weather. Ideally, I’d like persistent light rain in March and April. Then the air and ground warm up in May. In June, rain, best at night, and warm and dry days. That will be important for plants and grasses. But we’re going to be planting a lot of trees, many of them quite young. The weather will be key.”

The progress of the Amp construction will also impact the gardens staff efforts.

Burgeson then led the way to the rear of the overflow parking lots across Route 394 from the Institution. Stacked in orderly piles were stone pavers from the Founders Glen area on the north side of the back-of-house at the Amp. Nearby were the engraved bricks which have for 40 years formed part of the west perimeter wall of the Amphitheater.

Next to these stones and bricks was Peters Bridge, the iconic red structure which became a sentimental symbol last summer for what would be lost in the Amp renewal project. Stacked in neat sections, the familiar red painted wood did not look too much the worse for its off-season wear.

“The bricks and pavers will be appropriately reinstalled,” Burgeson said. “We’re planning to erect at least part of Peters Bridge to carry the new woodlands trail behind Bellinger Hall across a stream as it meanders through a woods toward the wooded playground and toward Turner [Community] Center and a connection to the Highlands neighborhood. We were looking hard at erecting Peters Bridge across the creek on the south side of the Girls’ Club grounds, but there might not be sufficient elevation for the bridge to be installed there. We’re still looking at options.”

An additional complication for Burgeson and her staff in the coming off-season will be the periodic tree inspection on the grounds by National Grid.

The power company will often top off trees to clear its lines. Burgeson said the Institution will engage with National Grid on this, and will mostly recommend that trees be taken down instead of topping.

“Topping off trees is not good for them, especially in the longer run,” she said. “We think it is better to remove them and plant replacements in better locations relative to the power lines.”

Another busy off-season beckons for the gardens and landscape staff. Then will come the 2017 season so full of promise and unpredictability.