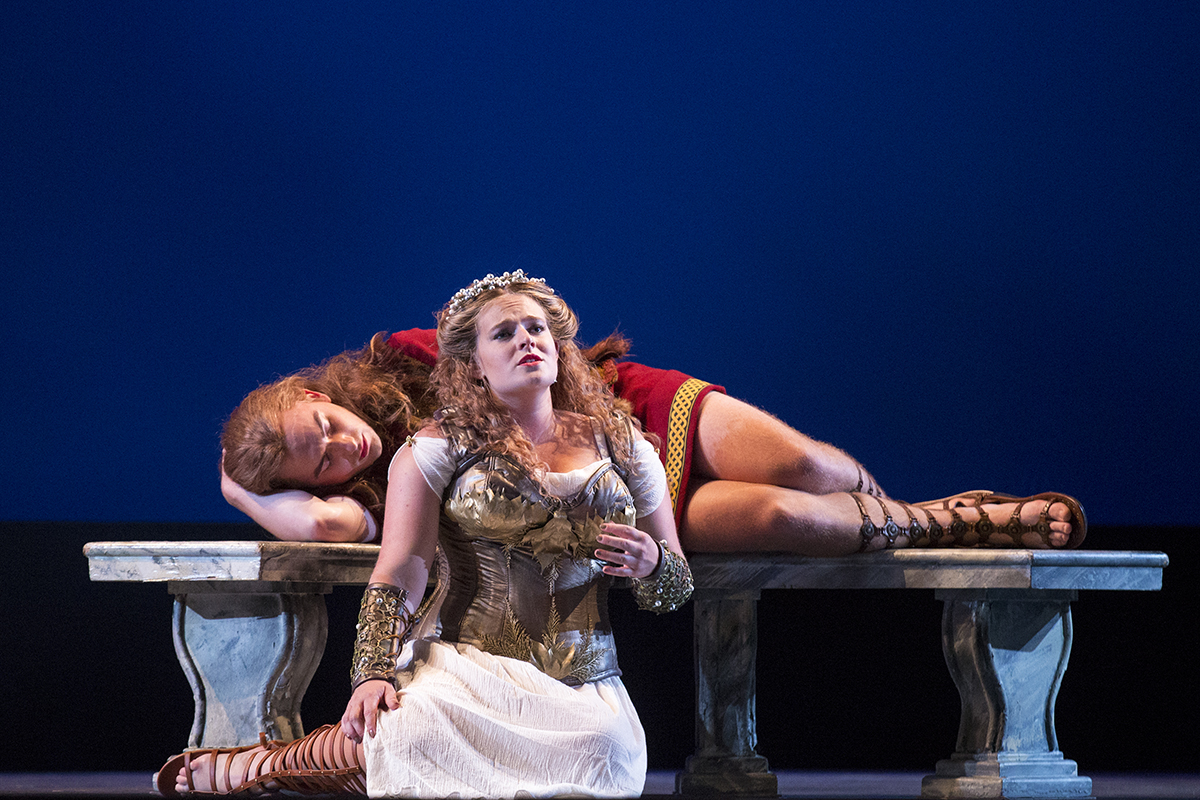 Don’t tell an opera singer not to cause a scene. It’s what they do best — on stage, at least.

At 4 p.m. August 5 in Norton Hall, the Chautauqua Opera Company Studio Artists will perform an array of fully staged and costumed scenes from classic and contemporary opera.

“It’s an opera sampler,” said Kathleen Smith Belcher, who is directing the show with Cara Consilvio. “It’s a combination of things that people will definitely know, and then there’s some stuff that’s a little off the beaten path.”

The program will begin with “All’idea di quel metallo,” the Act I recitative and duet from Il barbiere di Siviglia by Gioachino Rossini. Tenor Vincent Festa will portray Count Almaviva and baritone Heath Martin will sing as Figaro.

“This is when Figaro comes up with all his ideas about how to get the Count in the house, that he should be a drunken soldier,” Belcher said. “It’s a fun little duet.”

Belcher’s name may sound familiar to those who attended The Mikado on Friday or Monday. She is married to baritone Daniel Belcher, who played the role of Pooh-Bah in the production. An established opera professional in her own right, she has served on the directing staff for the Metropolitan Opera for 15 years and mounted productions with Los Angeles Opera, San Francisco Opera and Lyric Opera of Chicago, among others.

Consilvio said the scenes program is a favorite among the Studio Artists because it gives them a chance to stage their individual repertoire.

“The duets are eight minutes long and it’s a different type of energy than in the mainstage shows, where most of them have been in ensemble and chorus and small feature roles,” Consilvio said. “This is really a chance for them to shine and work on putting it all together, which is always the hardest thing in operas.”

Belcher described the Act I Finale of Così as a whole story in and of itself.

“Pretty much from start to finish, it’s an entire chunk of drama,” she said. “You’re not missing too much. If you walked in and saw it [without the rest of the opera], it would be a complete story.”

The final selection will feature all 16 of the Studio Artists in “Make Our Garden Grow” from Leonard Bernstein’s Candide.

“The finale is the one that is not being staged as if it were in the [full] opera,” Consilvio said. “We are changing it and adding voices to it, and it’s done in such a way that it’s just a wonderful chance to have all of the Studio Artists sing together.”

Consilvio and Belcher will briefly explain the context of each excerpt, and the entire program will last about an hour.

“It’s short, and you can go before Straight No Chaser,” Belcher said. “Go to ‘Opera Scenes’ and then go to a cappella.”