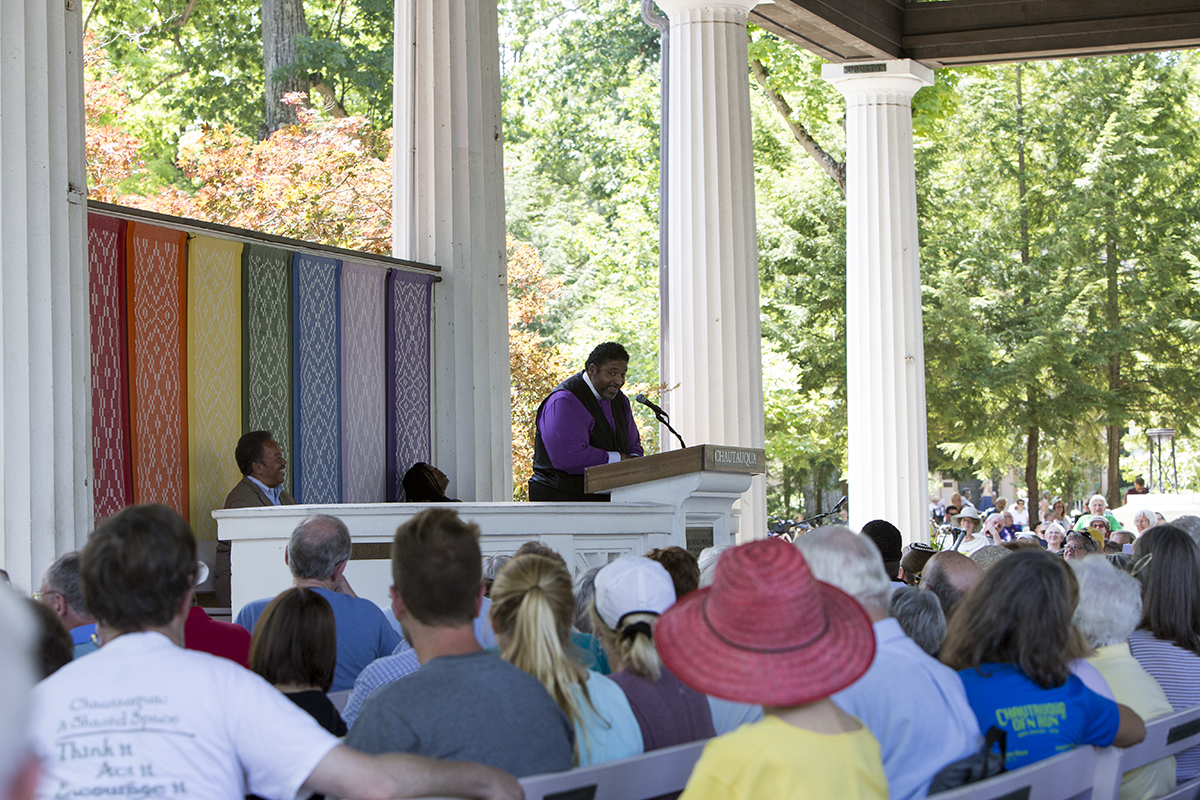 In 2016, the hymns of the civil rights movement were  being sung at Chautauqua. The anachronism came out of the Moral Monday movement, where Allen sings almost monthly with thousands of protesters.

Allen and the historic hymn prefaced the message that Rev. William Barber II would expound upon for the next hour: The United States is entering a new civil rights movement, and Americans will need to take a moral stand for it to reach fruition.

“Progressives [are] finally getting their backbone to stand up and declare some issues are not liberal vs. conservative but right vs. wrong,” Barber said. “I really believe we are in the adolescent stages of a third reconstruction in America, and if we can fully grasp the power of a moral fusion intersectional movement, we can see it come to full adulthood.”

Barber captured the attention of the nation a week before coming to Chautauqua Institution, when he “dropped the mic” at the Democratic National Convention, as The Washington Post put it. The founder and leader of the Moral Monday movements, Barber implored people to look beyond politics and take a moral stand.

It was also an argument about American politics, at least in the last 150 years. The Southern strategy and Republicanism were racism refined and the defining political fights — from welfare to tax policy — have all been debates about race and how to keep black Americans at the lowest rungs of society. Trump is George Wallace reincarnate, Barber said, but neither of them are particularly unique.

To transcend those politics, Barber said Wednesday and at the DNC, America needs a moral revival.

Barber began with the original Reconstruction, the period in the South right after the Civil War. From 1865 to 1868, he said, moral alliances between whites and former slaves managed to take over the legislature of every state in the former confederacy. Before the federal government passed the 14th and 15th amendments, those states rewrote constitutions to guarantee not only fair treatment and voting rights, but also fair wages and support for the poor.

In 1868, there were more blacks in the North Carolina legislature than there are today, Barber said. The backlash, however, was almost immediate.

Many southern whites found any association between whites and blacks to be inherently sinful, Barber said. The KKK was first founded not to attack blacks, but whites who worked with them, Barber said. Those KKK founders, who Barber called “deconstructionists,” launched anti-tax campaigns, knowing that without those taxes, state governments could not rebuild the post-Civil War economy and give former slaves all that was promised to them.

It would set the tone for more than a century and a half of anti-tax policies that undermined programs to help blacks and poor whites, Barber said.

Slowly, deconstructionists took away the right to vote from the ground-up, gaining control of the courts to do it. In 1875, the federal government passed a civil rights act making it a felony to discriminate in publicly owned business. But in 1877, Republican presidential candidate Rutherford B. Hayes lost the popular vote but was allowed to take office on a tricky electoral count (“Sound familiar?” Barber asked) in exchange for withdrawing soldiers from the South. By 1883, the Supreme Court had struck down the civil rights act with only one dissenter, and Jim Crow laws were starting to take shape.

Barber said like today, those deconstructionists used moral language to justify immoral acts. He read from a text of the time: “Their goal was ‘to take back and make America and make America great and redeem …,’ ” Barber said, trailing off as the crowd began to laugh. “I’m just reading history.”

When civil rights activists began to try win back the lost gains of Reconstruction in the mid-20th century, they framed their struggle in moral, rather than political, terms, Barber said. He quoted Martin Luther King Jr., who said that if the marchers were wrong, then God was wrong. That constant moral appeal created the climate for politicians who long opposed civil rights legislation to vote for it, Barber said.

“The languages in the streets and pulpits matched … and even in the halls of power, congressmen and presidents and governors and newspapers and poets began to talk about the moral urgency because any other language was too puny, as I believe ‘left’ and ‘right’ is too puny for us today,” Barber said.

Often forgotten in the decades since, Barber said, is the fact that the civil rights movement was intricately tied to Lyndon B. Johnson’s War on Poverty. Johnson withheld Medicare funds from hospitals that refused to desegregate; the result was better health care for both blacks and poor whites, as well as drastic reductions in childhood and elderly poverty.

But then King and Malcolm X were shot. Those opposed to the civil rights movement first used the same terror of Jim Crow and then the same anti-tax, anti-government policies of the post-Reconstruction era to signal anti-black sentiment without using the N-word, Barber said. They called it the “Southern strategy” and it won Richard Nixon two elections.

“Guess what the mantra of Southern strategy was?” Barber said. “Hmm, ‘We must take our country back, make it great and redeem it.’ ”

The message was that blacks were getting unfair advantages — free stuff — Barber said. Their goal was to prevent whites and blacks from ever forming the type of moral coalition, Barber said, that rose after the Civil War and that is needed again.

To prove the similarity between many politicians today and those who opposed the civil rights movement in the 1960s, Barber excerpted a speech from a politician who deplored insiders. That candidate said “our system is under attack,” there is “anarchy in streets,” that he will “get jobs back” and that this is not about race because he has “black folk with me.”

The speech is from segregationist Wallace, not Trump, Barber said. Today the voter-suppression of Jim Crow is alive in Voter ID laws that disproportionately impact low-income people and communities of color, and in leaders who continue to attack entitlements and aid programs. Like the deconstructionists who took over the courts to eventually win the entire South, the Koch brothers have spent billions to implant ultra-conservatives in state legislatures across the nation.

Yet after five decades, Barber has hope that a third reconstruction can arise, if only people can reclaim the moral high ground of the 1960s.

The first sign is simple demographics; the fact that President Barack Obama won Virginia and North Carolina in 2008 showed that in an increasingly diverse society, minorities and progressive whites can no longer be silenced.

The second is the success of the Moral Mondays movement, which Barber started after North Carolina state elected ultra-conservative Republican Pat McCrory to be its governor. The movement has helped establish same-day registration, early voting, a raised minimum wage and the Affordable Care Act. The major constant across reconstructions, aside from the backlash, was consistent movement building. Barber said Brown v. Board of Education marked the start of the second reconstruction, but activists worked consistently through the 58 years between when Plessy v. Ferguson legalized segregation and 1954, when Supreme Court struck it down. Moral Mondays has also gained support across the political spectrum in North Carolina, Barber said, as the movement appealed to more than just liberals.

Finally, Barber told progressives not to back down when conservatives bring up the Constitution. He said to embrace it and began to read the Preamble.