Opera Young Artists Present “Around the World in About 80 Minutes” 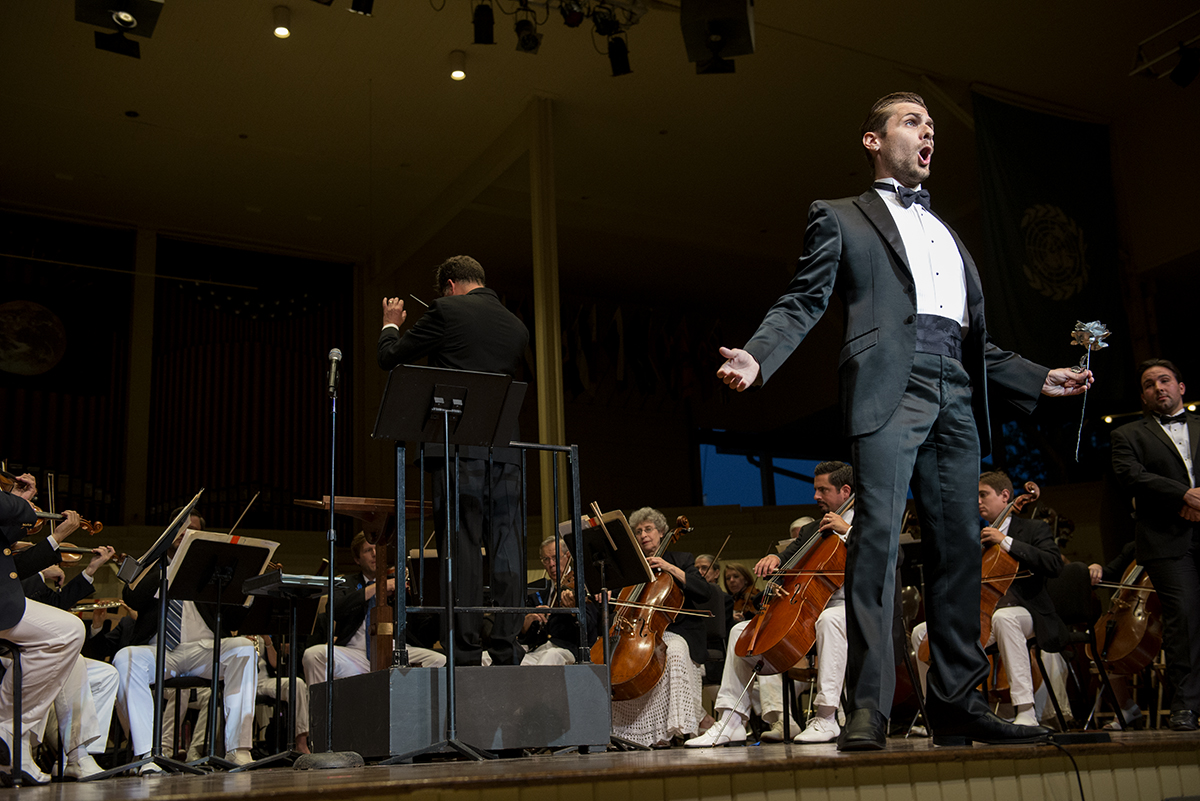 From “New York, New York” in On The Town to “Ya Got Trouble” in The Music Man, cities have long played a substantial role in the plots of musical theater productions.

At 8:15 p.m. Saturday in the Amphitheater, in keeping with the Week Six Theme of “The Future of Cities,” the Chautauqua Opera Company Young Artists will present “Around the World in About 80 Minutes.” The evening is a selection of pops favorites in collaboration with the Chautauqua Symphony Orchestra under the baton of guest conductor Stuart Chafetz.

“There were too many great ones to choose from,” said Carol Rausch, company chorus master and music administrator. “You could do five or six programs of stuff like this, but we picked some of our favorites.”

The concert will open with the overture to the 1956 film “Around the World in 80 Days,” but that’s not the only reason for the program title. The settings in the music include everything from Kansas City and Boston to Barcelona and Copenhagen.

“We tried to stay on other continents besides North America,” Rausch said. “We hopscotch around quite a bit.”

Several of the singers have personal connections to the locations about which they sing. Soprano Abigail Rethwisch will sing “My White Knight” from The Music Man, which is set in her home state of Iowa. Tenor Dennis Shuman, whose home state is Georgia, will sing “Prologue: The Old Red Hills of Home,” an ode to the city of Marietta, Georgia, from the 1998 musical Parade.

Shuman and fellow tenor Quinn Bernegger both found their way into opera through musical theater and have performed in shows such as Hysterium, A Funny Thing Happened on the Way to the Forum, Into the Woods, Les Misérables, Grease and Beauty and the Beast.

Bernegger will perform “A Foggy Day” from A Damsel in Distress, “I, Don Quixote” from Man of La Mancha with bass Hans Tashjian, and “Kansas City” from Oklahoma! with mezzo-soprano Deanna Pauletto.

In addition to his song from Parade, Shuman will sing “Big D” from The Most Happy Fella with mezzo-soprano Rachel Braunstein and “Stranger in Paradise” from Kismet with soprano Chelsea Miller.

“Others do a lot of crossover, but I haven’t,” said baritone Brian James Myer. “They gave me a few things and I didn’t know any of it before, but it’s fun because you get to do new stuff.”

Myer will perform “I Love Paris” from Can-Can with Braunstein, “Wonderful Copenhagen” from “Hans Christian Andersen” with countertenor Patrick Terry and “Where Is the Life That Late I Led” from Kiss Me, Kate.

The biggest difference between this program and the Opera Highlights concert earlier this season is that the singers will use microphones, so the lyrics will be easy to hear and understand.

“This will be just a fun, whirlwind tour of a lot of cities,” Rausch said. “And I think musically satisfying, because there are some old favorite and certainly some pieces that I would say the majority of our audience has not heard.”

“Come to the pops concert. We’re really funny people and we can sing,” he said with a laugh. “Mostly me, though.”