Many Chautauquans know the creative impulse doesn’t stop after a certain age.

Poet Molly Peacock knows it, too, and she’ll explore that theme with her Brown Bag, “Leap the Limits: Beginning a Life’s Work (After Already Living a Life).” 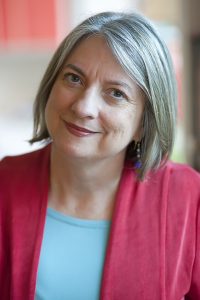 Peacock is Week Seven’s poet-in-residence at the Chautauqua Writers’ Center, and her lecture will be at 12:15 p.m. Tuesday on the front porch of the Literary Arts Center at Alumni Hall.

Peacock considers herself a rare bird when it comes to writing.

“I’m somewhat unusual: I’m one of those poets who writes prose,” Peacock said.

In addition to her multiple poetry collections, Peacock is the author of The Paper Garden: Mrs. Delany Begins Her Life’s Work at 72. The book tracks the life of the 18th-century British woman Mary Delany, who Peacock said pioneered the art form of mixed-media collage in her eighth decade.

“It’s such a remarkable story, and I decided I would try to track every instance of creativity in her life, from the age of 6 to the age of 72, to see if I could find out how a woman at an advanced age could invent an art form,” Peacock said.

Peacock said her Brown Bag is inspired by her work on The Paper Garden and what she learned and observed from diving into Delany’s life. She found herself taken with Delany’s late-in-life artistic renaissance.

Peacock said she’ll also discuss her own work as a writer and see what lessons she can “extrapolate for everybody else.”

“People think they don’t have the time, it’s all over, how could they possibly begin this — but the fact is, in tracking Mrs. Delany’s life, I found threads of that creativity throughout,” Peacock said. “And the talk will be about finding those threads in your own life, using the example of Mrs. Delany.”

Peacock thinks her audience at Chautauqua can take away a lot from Delany’s life, and she hopes they come away as inspired as she was.

She also hopes Delany’s success might provoke her audience into starting their own artistic journeys.

“The example of Mrs. Delany is so incredible, and it’s so concrete: you can perceive these instances in your own life,” Peacock said. “For all of those people who have secret desires, or there’s something new in art-making on their bucket list, this is for them.”

BTG Brown Bag to Argue Plants Are Cool, Too