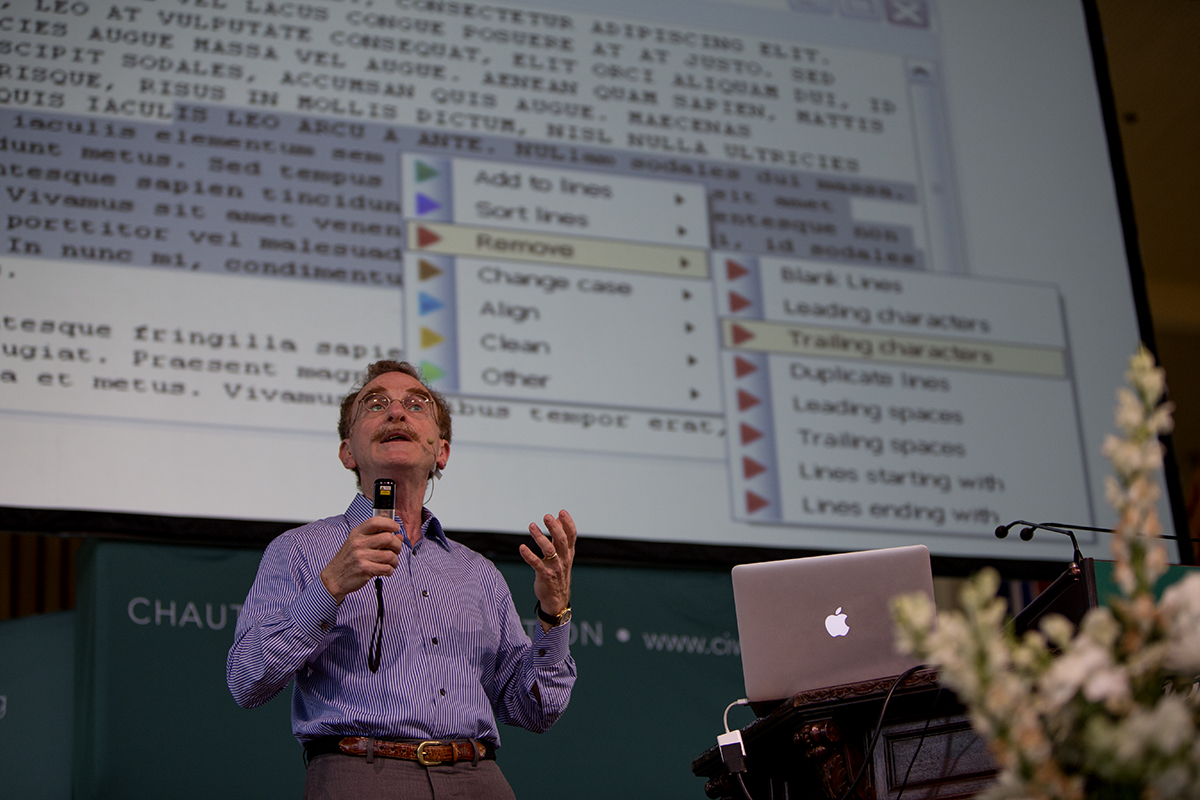 Nobel Prize-winning cell biologist Randy Schekman first became interested in microbiology as a child when he looked at pond scum underneath a toy microscope.

“I couldn’t believe what was revealed to my eyes,” Schekman said. “It was a world of microbes — swimming, darting about, bumping into things, eating other organisms in the field — all beneath … what you can see with the naked eye.”

Schekman, professor of cell and developmental biology at Howard Hughes Medical Institute, spoke about editing DNA with an enzyme called CRISPR-Cas9 during the 10:45 a.m. August 10 morning lecture in the Amphitheater.

Schekman explained the function of DNA and how mRNA carries information from the DNA to structures known as ribosomes. Those messages are then transformed into proteins that are used throughout the body.

For example, Schekman explained, the function of a beta cell in the pancreas. Beta cells produce insulin, a protein, which is discharged during a meal into the bloodstream. Those proteins recognize glucose and work to produce energy and store glucose for future use between meals.

In the mid-1970s, Schekman began to focus on membrane fusion. He and his students studied baker’s yeast, which goes through the same process of protein export human cells undergo. By 1978, the students discovered a mutation in the cell prevented the capsules containing proteins to export from the nucleus. Those capsules continued to accumulate until the cell died. Schekman said the day that was discovered is as clear in his mind as the birth of his children.

He then asked what scientists would need to do in order to reverse that mutation and change the cell back into its original state.

“It’s a herculean task because … the human genome has 3 billion bits of information,” Schekman said. “It would be like opening a phone book from New York City and closing your eyes and looking to and pointing to a particular entry. How do you do that? How can you go in and with a precise scalpel change a particular gene or genome bit?”

Four years ago, European scientists discovered CRISPR when investigating bacteria in soil. The bacteria had developed a way to ward off viruses in a way Schekman referred to as a “natural phenomenon.” Those bacterial cells were able to evolve a primitive immunity of infections that threatened to kill the cells.

Schekman said a small piece of an RNA contains an enzyme that attaches itself to the foreign DNA (the virus) and breaks it off, inactivating the virus.

The discovery of CRISPR will revolutionize biotechnology by allowing scientists to target specific DNA mutations and fix those mutations, according to Schekman.

“The precision of this is all made possible by the fact that you can design, in the laboratory and synthesize chemically, a small piece of RNA that is complementary to a region of the gene that you wish to repair,” Schekman said.

In the 30-year history of AIDS, only one person has been entirely cured of the disease. A man in Germany had AIDS and a form of leukemia simultaneously. A bone marrow transplant was needed to treat the cancer. Doctors killed the patient’s blood-forming cells and repopulated them from bone marrow from a donor who had a mutation that prevented the contraction of AIDS.

As a result, the man with AIDS was cured when his blood-producing cells populated with the mutation in the genes. Schekman said that procedure could be used to cure people of the AIDS virus.

An ethical issue arises in the technology of CRISPR-Cas9 when deciding whether to alter genes during the germline stage. Those changes could be preventing the likeliness of Alzheimer’s or introducing an element that would result in a higher IQ of the child.

Schekman said the general consensus among scientists is that editing genes during the germline stage, meaning scientists would inject the egg with CRISPR, is unethical.

“The general feeling, in fact, the overwhelming feeling is that there should be a moratorium on editing germline DNA, but not somatic [or adult] cell DNA,” Schekman said. “For the time being, there’s a very strong feeling around the world that there should be a moratorium, and governments can enforce that by regulation, and most of us support that.”

Another controversy with CRISPR is the genetic modifications made to foods, known as GMOs.

For more than 30 years, Schekman said foods have been genetically modified, and 75 percent of food consumed has some modified component. He used mushrooms as an example, which were modified to kill a gene that makes them brown and spoil prematurely. The modification allows the mushrooms to be fresher longer “without changing the mushroom at all in any substantial way.”

Although the U.S. can afford to modify food in that way, some third world countries cannot. Scientists have been looking into ways to solve issues in those countries. Schekman discussed a Vitamin A deficiency in countries such as South and Southeastern Asia. Schekman said the reliance on rice as a major portion of their diet does not produce enough Vitamin A.

Schekman said genes from carrots that produce the vitamin beta-carotene were introduced into a strand of rice, producing what was named “golden rice.” He believes the results are promising and could stop the Vitamin A deficiency, which results in 2 million deaths every year.

Some organizations such as Greenpeace and Friends of the Earth believe those experiments should be prohibited and are fighting for GMO foods to be labeled with a listing of what was modified. As a result, government action in third-world countries have been blocked.

“Their reliance on political views is misplaced,” Schekman said. “These are organizations that embrace science. They support the notion that climate change is bad and that humans are responsible for climate change, but when it comes to the overwhelming view of the vast majority of [biology scientists] in the world, who embrace this technology and see its positive application, organizations like Greenpeace are willing to ignore science.”

Schekman recently signed a letter to Greenpeace urging it to reconsider its opposition to GMO foods. More than 100 Nobel laureates have signed the letter.

“I believe that this science has [a] powerful application to human health,” Schekman said. “I urge you to take a closer look at this and to see how this shows such great promise. Everyone needs to be aware of this technology because it will affect you and your children in generations to come.”