The Tuba Gets Some Love in Open Student Recital Monday 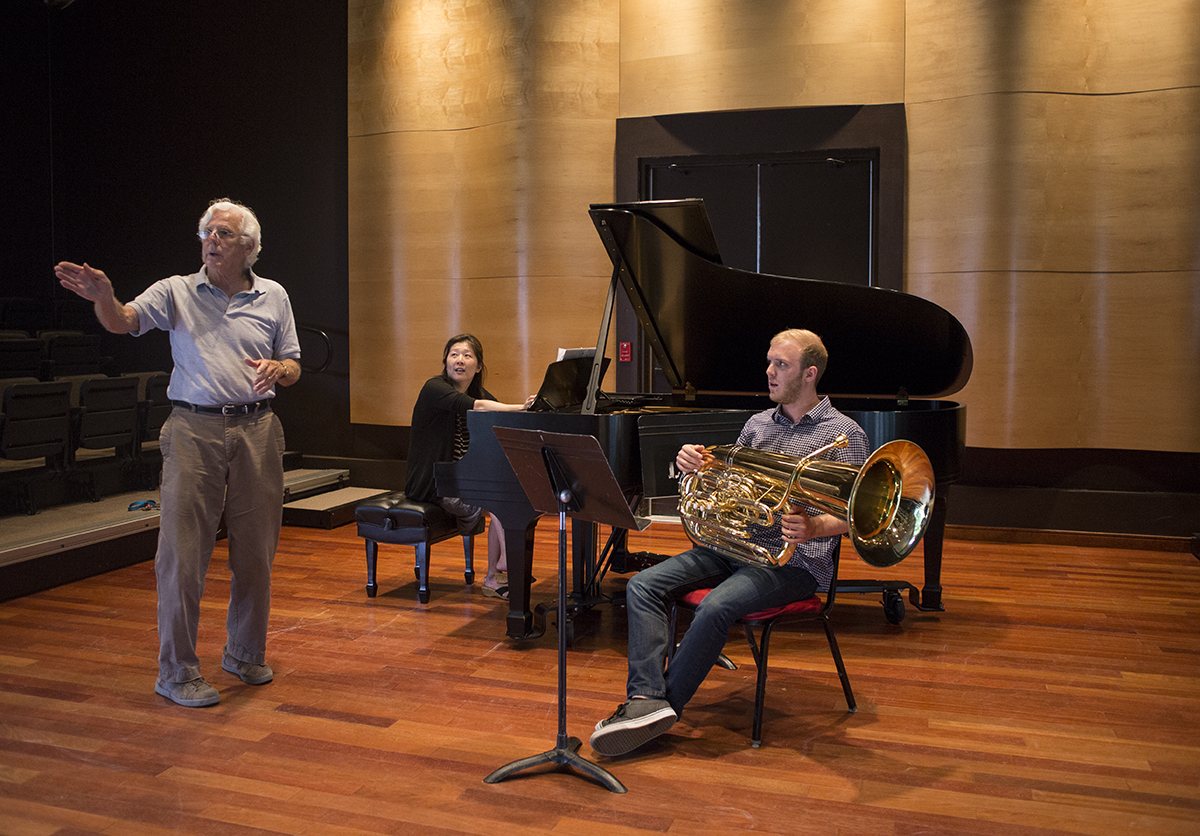 A tuba player has less repertoire to choose from than other brass instruments because the instrument’s true genesis was in the 20th century. So when a young composer creates a piece designed for the tuba, players may jump at the chance to learn and perform it.

Music student and tuba player Evan Zegiel will perform the world premiere of “Under Mountains of Ocean” by composer Nelson Gast in an open recital at 2 p.m. Monday in McKnight Hall.

Zegiel and Gast met in their sophomore year of undergrad at University of Michigan when they worked as vice president and president of the school’s chapter of Phi Mu Alpha Sinfonia, a fraternity for musicians.

“[Gast] writes stuff that’s really complex, but it makes sense when you hear it,” Zegiel said. “There are some contemporary pieces that challenge a listener’s ability to engage with it, but he draws in the listener in a way that makes them feel welcome.”

Zegiel described Gast as seeming shy until someone really gets to know him, but his personality shines through in his compositions.

He said the things Gast says with his music are congruent with the things Zegiel likes in music.

“When you hear his music, you can hear all the explosiveness and the energy that sometimes he doesn’t let show in his daily interactions with people,” Zegiel said.

Before the piece was finished, Zegiel heard a colleague perform the first movement. But over two years of tinkering and recreating, the completed three-movement piece is wholly new.

Zegiel said even though he considers the piece to be more dissonant, there is still an anchor for listeners to hold onto. Zegiel said he is attracted to dissonant music in part because he grew up listening to a lot of rock and metal music, and still considers himself a “metal head.”

But dissonance, Zegiel said, is something that could set this piece apart from many other contemporary works for tuba, which tend to be more tonal, and easy to listen to.

Gast’s “Under Mountains of Ocean,” was written for tuba and piano because these are instruments that can evoke powerful impressions. The piece follows the traditional flow of a sonata with three movements in a fast-slow-fast order.

Zegiel said even though Gast’s work is contemporary in style, it borrows some flavor from Bach.

“It’s a Bach melody that he used in there, and he kind of warped and twisted it around,” he said. “It will stand out as being new, but it won’t be so outside the box that it’s unintelligible.”