The Rev. Ron Cole-Turner is already a Chautauquan — he and his wife worked for years at the Chautauqua Institution United Church of Christ House and now teach in the Mystic Heart Meditation Program. In the past, Cole-Turner has spoken on both the morning lecture platform and the Interfaith Lecture Series.

At 2 p.m. Monday in the Hall of Philosophy, Cole-Turner will kick off this week with a lecture titled “Would You Make a Good Transhumanist? or Why We Need Both Technology and Religion,” where he hopes to introduce Chautauquans to this week’s theme, “The Limits and Transcendence of Our Humanity.” 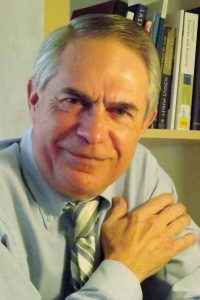 rsation for the week,” Cole-Turner said. “I really want to trigger a communal conversation as much as I possibly can about these technologies and their role in our future.”

Cole-Turner was raised a conservative Evangelical, but soon became interested in scientific ideas that made him veer away from parts of his religious upbringing. But although he rejects some notions that conflict with science, including creationism, Cole-Turner still feels tied to the evangelical way of “living with an openness to God’s blessing and healing and uplifting grace.”

That faith eventually led Cole-Turner to become an ordained minister of the United Church of Christ, but his interest in science never wavered. He became increasingly interested in examining the religious significance behind developments in science and technology, and co-founded an organization called the International Society for Science and Religion.

Cole-Turner became interested in genetic engineering when it became popular in the ’80s.

“I was raised with the idea that God heals us in part through medicine. Now I am asking whether God takes us beyond healing into something that might be called human enhancement,” Cole-Turner said. “I am cautious about raising those questions, cautious about some of the unintended things that could happen and very likely will happen, but I am hopeful and supportive of developing these technologies and their uses for ways that take us beyond ordinary health.”

Cole-Turner believes studying this field starts by examining the number of technologies that are already being used in an effort to enhance human performance on some level. Some examples of that include athletes using steroids, college students abusing cognitive performance drugs such as Adderall and Ritalin, emotional mood enhancement drugs and even moral enhancements — although Cole-Turner said their effectiveness is unclear.

“There are a number of technologies that are already being used in an effort to try to enhance human performance or to go beyond the limits of our biology,” Cole-Turner said.

He said some topics of discussion include how gene editing and the modification of human embryos should be applied to prevent disease or enhance human health or performance.

From the perspective of a theologian, Cole-Turner said those topics invoke debate on the classic ideas of human beings as creatures. They beg the question: Is it true that God made humans in a specific way and they should live out their existence as such? Or, if humans did evolve through evolution, can man-made technology be a part of our evolving future?

Cole-Turner said many transhumanists say to view human beings as a “work-in-progress,” which to an extent, he agrees with ideologically.

“I agree, but as a Christian, I’d want to say it’s God’s work-in-progress, and we are committed to use all of the means that God has given us,” Cole-Turner said. “We are permitted to use technology also, as long as it fits within a broader framework of what seems to us to be legitimately considered God’s program for the transformation of humanity.”

But as far as what that “framework” looks like, Cole-Turner thinks the extent of technology’s use is still up for discussion. He said technological advancement is inevitable, but people need to think about how to frame those technologies within their idea of a good life.

Cole-Turner’s lecture Monday will provide his religious approach to that question, but his main goal is to get Chautauquans to start analyzing those ideas from various perspectives.

He said anyone who expects him, “the religion guy,” to claim a particular opinion will be disappointed.

“It will seem less than crystal clear exactly where I stand, and that’s the way it is,” Cole-Turner said. “We learn as we go along, we make adjustments, we learn from experience as a culture. We’re going to make mistakes — there’s no doubt about it — but if we risk making the mistakes, I think the potential payoff is pretty significant.”