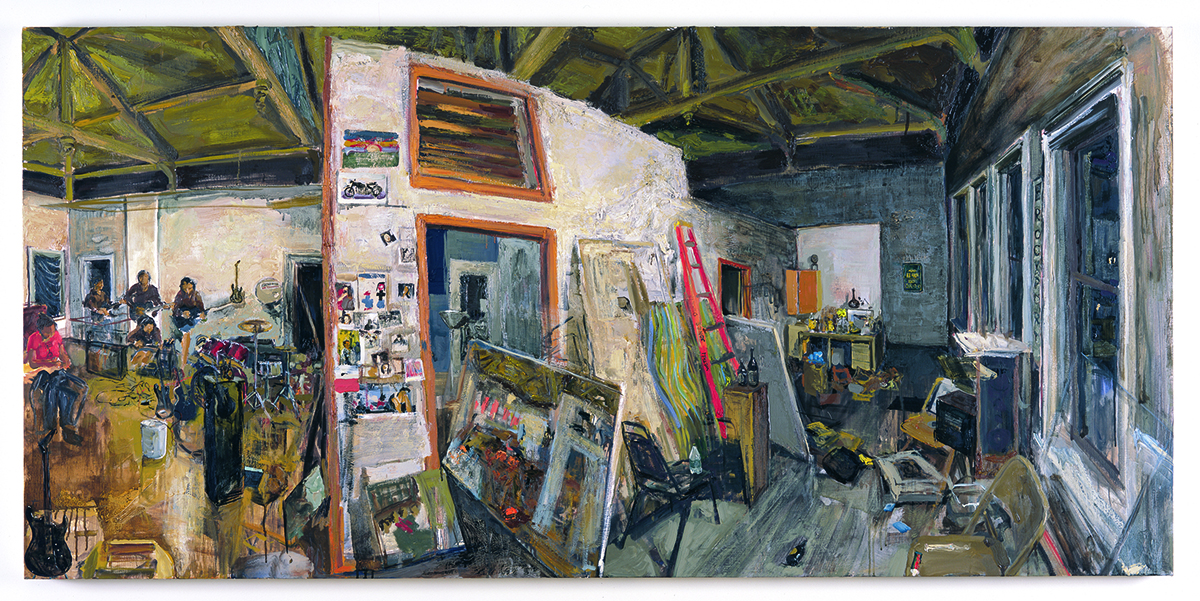 Gideon Bok believes a painting should get more interesting the longer the viewer examines it.

“I often think of paintings and poems in a similar way: how you read a good poem and you go back and read it again and it’s totally different,” he said.

Bok, an artist represented by Plane Space Gallery, New York City, and Alpha Gallery in Boston, is spending two weeks with Visual Arts at Chautauqua Institution to teach drawing for the School of Art. He will give a lecture at 7 p.m. Friday in the Hultquist Center to discuss his perceptual work and emerging ideas.

As someone who chooses his words carefully, Bok doesn’t want to get “too far into the weeds” when talking about art, but he is happy to explain why he finds painting important.

“It requires a level of visual empathy that we don’t give to the images that we see daily — the kind of images that are on TV or the internet, Instagram, Facebook and whatever,” he said.

The constant turnover means images online are quickly absorbed and scrolled past.

“Painting is not about that,” Bok said.

Just as the viewing of a painting is a process, so is creating one. Some of Bok’s paintings take years to finish, as he works on several at once. Others take only a month or so, but what is being portrayed evolves over time. As a perceptual painter, Bok does not work from photos or video, but rather from what he sees — and what he sees is constantly shifting.

“I work just from what’s in front of me and deal with the dilemmas of that process,” he said. “The way things sort of bend as they get closer to you, the fact that I’m always moving a little bit, the fact that the light’s changing all the time and that the people are moving — those are all part of the problems, but also part of the interest.”

One of Bok’s continuing projects has been painting scenes of his studio and the people who visit it. Yet by the time he finishes a painting, those visitors have often disappeared, covered by layers of paint. It’s interesting, then, that Bok’s new project is portraiture.

Truly capturing a person’s aura is difficult, Bok said. He referenced great portrait painters like Alice Neel, Alex Katz and Alberto Giacometti, admiring how their works manage to capture the essences of people that extend beyond their physical appearances.

“That’s something that’s always intrigued me about portraiture,” he said.

Bok’s planned method for portraiture combines visual and audible aspects. As he paints, he records his conversations with the portrait subjects. Later, he will combine the recordings to mimic the noise of a party where many people speak at once, allowing only a few standout phrases to rise above the hubbub.

“When you’re looking that hard at someone for so long, and they’re looking back at you, there are these really interesting conversations that start to happen,” Bok said.

He hasn’t decided how to bring together the two components, but he’s considering showing blank paintings alongside audio recording of the conversations from the sittings.

“But I also could see how that could be really cheesy,” he said. “So I’ll just have to see how it works.”

Bok, who is also a musician, is captivated by sound. His fascination with music also influenced his project with album covers, in which he recreates the covers of albums from his own collection, but with a perceptual twist. The wooden panels he paints on are cut to the exact size of a LP record, yet he paints each album as if it is sitting on a table, extending backward into the illusionistic space of the painting.

“It’s kind of subtle, but the image itself is distorted,” Bok said.

Bok said he’s always wrestling with the distinction between conceptual and perceptual — the incongruity between the distortion the eyes see and the brain’s instinct to correct that image – but he’s not afraid to try something new.

“Each painting gets harder rather than easier,” he said. “Like any profession that you work at ambitiously, it gets more difficult because you’re always challenging the thing that you made the last time.”