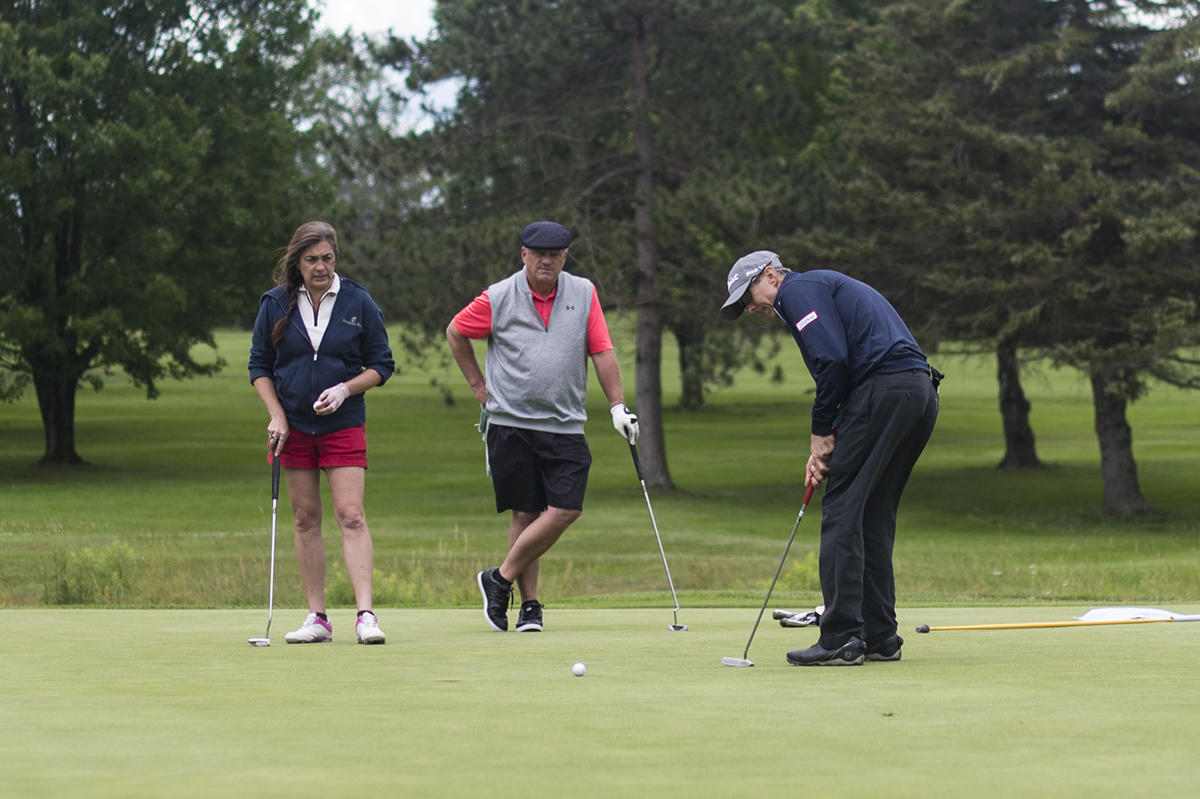 Lisa Payne, left, Mike Wolfe, and Jack Widger on Monday, Jun. 26 at the Chautauqua Golf Club. The three participated in the 6th annual "Score One For The Lake" Charity Pro-Am Golf Tournament, where all proceeds benefitted the Chautauqua Watershed Conservancy. OLIVIA SUN/STAFF PHOTOGRAPHER

Threats of inclement weather didn’t stop club professionals and amateur golfers from playing at the 31st Annual Charity Pro-Am Golf Tournament — for the sixth year dubbed “Score One For The Lake!” — Monday at Chautauqua Golf Club.

All morning, Tournament Chairman Bill Locke worried and watched the radar. But Mother Nature seemed to spare the event.

“I came through Mayville and it was pouring,” Locke said. “But when I came to the (golf) club, there was no rain at all.”

Other than a light shower around 2 p.m., the five-hour event was held under cloudy skies and middling wind mixed with beams of sunlight.

Club professionals from around New York and Pennsylvania were paired with amateur golfers in a two best-ball format featuring cash prizes for teams finishing in the top 10 out of the 28 participating teams.

The event grossed around $30,000 and earned an estimated net revenue of $45,000, according to Locke. For the sixth-straight year, all earnings went to Chautauqua Watershed Conservancy for preventive measures to clean up Chautauqua Lake.

Two pros tied to lead the pack of 28 participating teams. Dwayne Randall of Peek’n Peak Resort and Ryan Swanson of Pinehurst Resort Golf Course both shot a 68 on the day.

Swanson said the strength in his performance lay in his familiarity with the course.

“I’ve been playing here since I was 5 years old,” Swanson said. “It’s nice to come back and be close to home.”

As for Randall, he said he’s just a lucky guy.

The amateur battle was not as close.

One member of Sutherland’s foursome, Scott Christ, attributed part of his team’s success to multiple eagles on the 14th hole, where both he and Sutherland nailed eagles from the fairway.

“You seldom see that,” Christ said.

While competition fueled the event, the universal connecter was the sense of community.

Sitting outside in the pavilion of the Double Eagle Café, participants joked about bad golf shots, discussed stories of past events and caught up after not seeing one another since last summer.

Jennifer Flanagan has been coming to the event for over 20 years, and doesn’t plan to skip it anytime soon.

“It’s the kickoff for the golf community,” Flanagan said. “It gets the season started off on the right foot.”

Randall said he keeps coming back because he knows he’s going to have a good time.

But the main focus stayed on the lake.

Chautauqua Watershed Conservancy Executive Director John Jablonski said conditions for the lake were a lot different due to a mild winter and climate change.

“The plants grew more than usual,” Jablonski said. “Lake temperatures are a little ahead of schedule, which is producing more algae.”

Jablonski said the money raised would go to keeping nutrients out of the lake, stopping plant and algae growth; continuing the flow of clean water by conserving feeder streams and wetlands; and other preventive measures.

“The lake’s the most important asset of Chautauqua County,” Christ said. “We’ll do whatever we can to support it.”

Though he enjoys the community atmosphere and day of golf, head golf pro Troy Moss said the event is about cleaning up the lake.

“That was the real goal for the day,” Moss said. “Golf was just the fun part.”